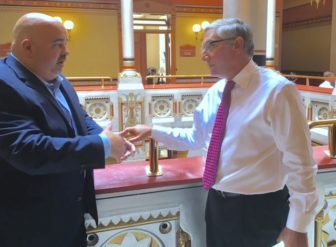 Legislators arrived at the State Capitol on Friday with the opportunity for the first time to see the details of a $41.4 billion, two-year budget proposal that the administration of Gov. Dannel P. Malloy and Democratic legislative leaders hoped would end Connecticut’s summer-long budget impasse.

After a dramatic failure Thursday night to bring the measure to a vote in either chamber, Democrats sought a political reboot, even as it remained uncertain early Friday afternoon if Democrats in either chamber had the votes for passage.

The compromise plan would raise more than $1.5 billion in new taxes and fees over this fiscal year and next combined, and would shift significant cost burdens onto cities and towns, to help close major projected deficits. Without adjustments, finances would run $1.6 billion in the red in the first year and $1.9 billion in the second.

The prime education grant to school districts would drop by $113 million, or 6 percent, in this fiscal year. The plan is much less ambitious than the governor’s initial push for a major redistribution in state education aid to favor the lowest-performing districts.

The budget also would include nearly $47 million per year in emergency aid to fiscally distressed cities and towns. The bulk of that aid is expected to be directed to Hartford, which is at risk of insolvency this fall. The package also features a new state oversight board to identify communities at risk before severe budgetary problems develop.

A new $12 charge on homeowner’s insurance policies will generate $9 million each year to help create a private insurance fund to assist those whose homes have crumbling foundations. The state also will provide another $10 million in each of the next six fiscal years to assist some of the 34,000 homeowners in Eastern Connecticut with failing foundations because of quantities of the mineral pyrrhotite in the concrete.

The new budget also relies on a major union concessions plan, which was ratified earlier this summer, to save almost $1.6 billion over the biennium. Without worker givebacks, the potential deficits across this year and next combined would have totaled about $5.1 billion.

The plan would raise General Fund spending — which covers the bulk of operating costs — by 3.2 percent in the first year — compared with last fiscal year’s spending. But the effective growth is less than 1 percent. That’s because much of the first-year spending increase involves payments to hospitals offset by matching taxes and federal reimbursement.

General fund spending growth in the second year of the new budget would be 1.2 percent.

But if the $344 million-per-year hospital tax hike is not counted — since the budget calls for the industry to get all of those funds back as part of a plan to leverage more federal Medicaid reimbursements — the total tax and fee hike drops to $842 million. That breaks down to $350 million in the first year and $507 million in the second.

While the hospital levy is the largest tax increase in the plan, Gov. Dannel P. Malloy nonetheless secured an endorsement for the new budget Thursday from the state’s hospital industry.

The Connecticut Hospital Association, which originally was sharply critical of the governor’s proposal, said it negotiated legal “assurances” with the governor and top lawmakers that the levy would impose no fiscal burden on hospitals.

The governor, who has limited authority to order emergency spending cuts when the budget is at risk of a deficit, would waive his option to reduce tax reimbursement payments to hospitals this fiscal year and next.

The new budget proposal also includes several new taxes and fees that received little or no debate during the regular 2017 General Assembly session, as well as some undefined increases.

A new state property tax of 2.75 mills would be levied on second homes.

Senate President Pro Tem Martin M. Looney, D-New Haven, said the levy was proposed to make the overall tax package somewhat more progressive. “If you own a second home, that indicates a certain level of affluence,” he said.

A second new component would add 49 cents per month to cell phone surcharges. This would raise $8.9 million this fiscal year and $17.7 million in 2018-19.

Another new levy involves a 10 percent charge on fantasy sports companies’ gross receipts. The charge would be tied to receipts from Connecticut patrons only and would yield $500,000 in the first year of the new budget and $700,000 in the second.

The package also calls for $50 million to be raised in the second year of the budget by canceling yet-to-be-identified tax credits. The legislature’s Finance, Revenue and Bonding Committee would recommend the credits to be canceled or reduced next spring.

“There’s been significant interest, at least in our caucus, in trying to broaden the base” of the sales tax,  said Rep. Jason Rojas, D-East Hartford, the House chair of the finance panel. Connecticut currently has dozens of sales tax exemptions worth more than $5 billion.

Other tax and fee proposals in the new budget include:

The budget relies on more than $215 million in revenues raided from specialized funds and other one-time sources to support the first fiscal year, and another $125 million in 2018-19.

The budget also cancels previously approved tax cuts that hadn’t been implemented yet for businesses and retired school teachers. That saves Connecticut $34.4 million this fiscal year and $33 million in 2018-19.

Earlier proposals to reduce Connecticut’s estate tax — which is imposed on estate’s valued at more than $2 million — and to increase taxes on real estate conveyances and on e-cigarettes were scrapped.

Sen. L. Scott Frantz of Greenwich, the Senate GOP chair of the finance committee, said Thursday that “this revenue plan, it’s an admission we are desperate,” adding it would undercut already sluggish job growth in the state.

The budget will cut overall state spending on education by about $140 million this fiscal year – most of which will fall on affluent and middle-income communities as cuts to the state’s primary education grant – the Education Cost Sharing grant. The ECS grants would total $1.9 billion under the new budget.

The budget essentially adopts the governor’s latest recommendation for the ECS grant – which significantly backed off his initial request to funnel an additional $300 million to the state’s 30 lowest-performing districts. Instead they would receive $11 million more this fiscal year.

But those districts, like all others, would be expected to pick up part of their teacher retirement costs for the first time.

However, several other grants those towns rely on would be cut. The Priority School District grants that help pay for summer and afterschool programs and other support in the state’s lowest-performing districts would be cut by $4.2 million. Funding for state interventions in struggling schools through the Commissioners’ Network is cut $1.2 million.

Funding for University of Connecticut will be cut by $34 million, UConn Health by nearly $19 million and the Connecticut State Colleges & Universities system by $25 million. UConn and CSCU depend on the state for 43 percent and 48 percent respectively of their annual support.