Financial aid for ‘dreamers’ becomes a reality in Connecticut

Michael Hernandez and other immigrants celebrating in the House gallery. It was filled with members of CT Students for a Dream and their supporters, who said they have been pressing for the legislation for years.

The Connecticut House of Representatives gave final passage Wednesday night to legislation that opens financial aid in the state to “dreamers,” the undocumented immigrants brought here as children, only to find themselves priced out of higher education as they come of age.

The legislation, passed on a 91-59 vote, makes undocumented immigrants eligible to apply for help from the $150 million pool of financial aid awarded annually to students at the state’s public colleges and universities. College-age immigrants and other supporters of the bill exploded into cheers from a House gallery decked in red, white and blue bunting.

“It means that college is a more realistic option for me,” said 19-year-old Michael Hernandez of Stamford, who came to the U.S. from Honduras as a 10-year-old. He has been accepted to the University of Connecticut and is seeking a green card under the Special Immigration Juvenile classification program.

With the governor’s promised signature of the bill into law, Connecticut’s public colleges will join seven other states in opening access to financial aid for some undocumented students.

Gov. Dannel P. Malloy applauded passage of the bill, calling dreamers “part of the fabric of this state.”

“They have been educated in our public schools, worked in our small businesses – and started small businesses of their own, paid taxes, and served in our military,” Malloy said. “Yet until now, they have not had access to the very financial aid that they pay into at our colleges and universities.”

With a deadlock in Washington, D.C. over immigration reforms, Connecticut stands in contrast with bipartisan passage of the bill. Thirteen Republicans joined 78 Democrats to the pass the measure, which cleared the evenly divided Senate on a 30-5 vote. 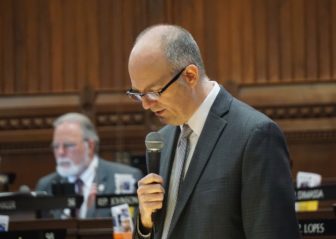 Rep. Gregg Haddad, the bill’s chief sponsor in the House. He was on his feet for six hours.

“I recognize this is a controversial issue. But this proves we can do in Connecticut what Washington has not been able to,” said Rep. Gregg Haddad, D-Mansfield, co-chair of the Higher Education Committee. “The workforce pipeline must be strengthened. … We are unlikely to meet

needs without including all of our residents.”

Rep. Tim LeGeyt, R-Canton, a longtime member of the Higher Education Committee, said opening financial aid is the fair thing to do.

“These students have done everything right and are here without any choice and are making all the right moves to comply the best they can with our culuture and government and the laws of citizenship,” LeGeyt said. “But for the fact that they did not have a choice to come here, they have become productive members of our high schools.

“If you lined them up with our documented students you wouldn’t be able to tell who is who… I can’t imagine why we should penalize them.”

Rep. Daniel Rovero of Killingly was the only House Democrat to vote no.

The Senate had twice in recent years passed similar legislation. This is the first time the House called the bill for a vote.

Not all undocumented residents will be eligible for the aid. To qualify someone must have moved to the U.S. before they turned 17 years old, attended a Connecticut high school for at least two years and be under age 36 by June 15. State residents who are undocumented and have served in the military and are honorably discharged also will be eligible for aid. Those with a felony are not eligible.

After the bill is signed into law, eligible undocumented residents will be able to apply for the aid starting January 1, 2020, while honorably discharged veterans will be allowed to apply upon the measure’s passage.

With the passage of this bill, federal Pell grants and state-taxpayer aid provided through the Roberta Willis Scholarship will still be unavailable to these students. The only pool of funding this opens access to is the money the state’s public colleges set aside from tuition dollars students pay to provide need- and merit-based financial aid.

Opponents of the legislation said they foresee crowding some legal residents out of the financial aid pool if undocumented students are given access. Concerns also were raised about the timing of expanding financial aid when state funding is being cut for public colleges and universities.

And then there are those who say immigrants should have to go through the legal path to citizenship to get help.

“A bill that perhaps gives dollars to someone who is undocumented really does not sit well with me. It bothers me. Like many families in Connecticut, my family did it the right way,” said Rep. Joe Polletta, R-Waterbury, the son of Italian immigrants.

A series of changes have been made over the last seven years to help lower college costs for undocumented students. In 2011, state law was changed so that undocumented students who attended all four years of high school in Connecticut qualified for the much lower in-state tuition rates at public colleges.

In 2015, the law was changed to lower the requirement to two years of high school. Just under 100 students benefit from these lower tuition rates at the University of Connecticut, and it is unclear how many benefit at the state’s community colleges and four Connecticut State Universities. Connecticut is one of 16 states to offer in state tuition rates to undocumented students.

Carlos Navarro, an 18-year-old Deferred Action for Childhood Arrivals (DACA) program recipient, said the bill’s passage would give him even more opportunity.

“Although we came here to this country through no fault of our own, I think it is important for us to look forward to college because if our parents brought us here, it’s because they want a better future for us–and those of who do want it, I think we deserve to get it.” Navarro said.

“I want to thank our students who fought so hard for this bill, year after year even after they graduated,” Ojakian said. “Today’s success was only possible because these students never gave up their fight for justice.”