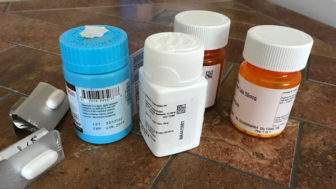 Approval also was unanimous in the House on Friday, and the bill now heads to Gov. Dannel P. Malloy’s desk.

“One of the issues that we hear time and time again in the insurance committee is the cost of health care,” said Sen. Kevin Kelly, R-Stratford, Senate Republican chair of the Insurance and Real Estate Committee, during debate on the bill. “One of the biggest drivers of cost is the prescription health pricing.”

“This bill is designed to bring transparency to that process and, armed with that information, we hope that we will be able to bring the cost of pharmaceuticals in Connecticut under control,” Kelly said. 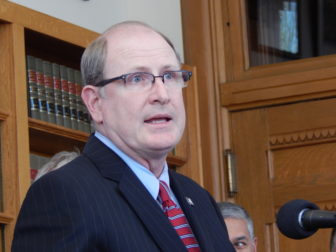 “This is an extraordinary victory for Connecticut patients who pay outrageous prices at the counter while powerful corporations are enriched by big discounts,” Lembo said.

The bill, which goes into effect on Jan. 1 , 2020, requires industry players to disclose a wide range of information to the state. Those affected include drug companies, health insurers, and lesser-known entities called pharmacy benefit managers, known as PBMs, which manage drug benefits for insurers.

In return for the rebates PBMs receive from manufacturers, the companies’ drugs are included on the insurers’ formularies, the lists of drugs the insurance companies will cover. 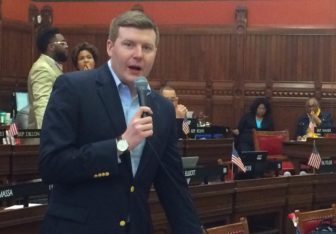 The rebates generally are offered on drugs where there is competition and not on generic drugs, where price inflation has been less. PBMs keep some of the rebate money and pass the rest directly to the insurers, which typically use the revenue to offset the cost of premiums for customers.

The Pharmaceutical Care Management Association, which represents PBMs, opposed the bill, saying in a statement the legislation would give drug makers “access to competitive information that would empower them to charge higher prices.”

The Connecticut Association of Health Plans was more amenable to the bill. They said they still had concerns but lawmakers had acknowledged their issues and they hoped to work with the legislature “to address the unit costs of drugs, which we believe to be among the biggest price drivers in the market.” The unit cost of drugs refers to the manufacturers’ prices.

The bill would cost the state about $275,000 in fiscal year 2020 for additional staff in the state Insurance Department and Office of Health Strategy, as well as consulting services for that year. In following years, it would cost about $300,000 for the staffers, according to the legislature’s Office of Fiscal Analysis.

The approved bill differs from the proposal that was voted out of the legislature’s insurance committee. Most notably it doesn’t include a requirement that the majority of rebates from drug companies be passed down to consumers when they buy drugs at pharmacies.

The provision for direct rebates to consumers was challenged by the insurance department and Connecticut Association of Health Plans, which argued it would cause premiums to increase.

Caitlin Carroll, spokeswoman for PhRMA, which represents the pharmaceutical industry, said the organization appreciated the bill’s comprehensive examination of  the drug supply chain but was disappointed that the final version didn’t include the direct-to-consumer rebates.