Hundreds of protesters converged in Hartford on Monday to rally against President Donald Trump’s “zero tolerance” immigration policy, resulting in the arrests of 35 people who blocked the entrance to a federal building.

The rally outside the local U.S. Immigration and Customs Enforcement offices drew protestors of all ages chanting “abolish ICE” and “here to stay” amid music by the Hartford Hot Several brass band.  The Hartford rally was part of a wave of protests in cities and towns nationwide calling for the reunification of families and an end to detention at the border.

A crowd the Hartford Police Department says grew to nearly 400 people included demonstrators bearing an array of signs, some that read “End Family Separation Now” and “I Am A Child.”

“This is about protecting my family, protecting my neighbors, protecting the people that I care about and I think that’s why most people are here today,” Morales Sanchez said. “Its not only reuniting families its far more than that, it’s about really giving a chance to people to thrive and really live with tranquility and dignity.”

The 35 arrests occurred after protesters blocked the entrance to the Abraham A. Ribicoff Federal Building and U.S. Courthouse.  They were charged with breach of peace, disorderly conduct, and trespassing. One individual was charged with interfering, according to police.

The furor over ICE has been touched off by the new role the Trump administration has given the agency, and by the separation of children from their parents at the border, even though ICE has little to do with enacting that policy.

ICE is charged with enforcing immigration laws in the interior of the United States. The U.S. Customs and Border Protection polices the border and is responsible for most of the family separations. 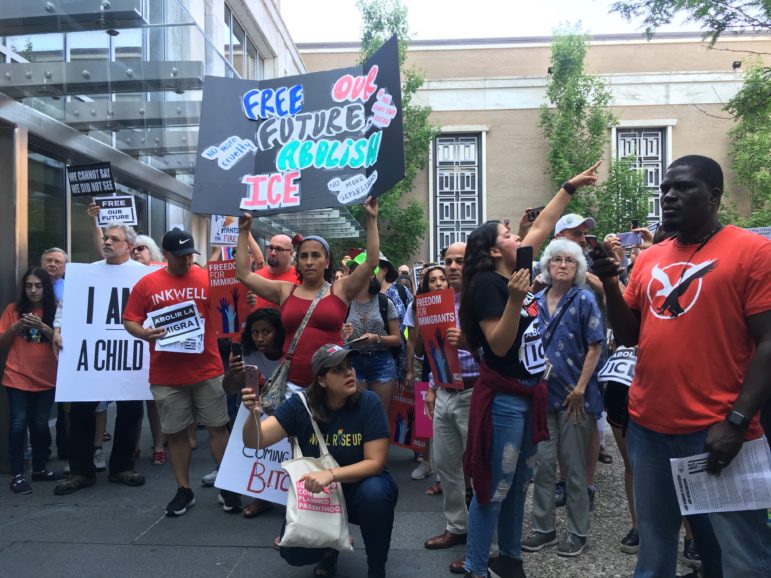 Protesters stand in the sweltering heat on Monday to rally against the Trump administration\’s separation of immigrant families at the border.

The “Abolish ICE” movement has been embraced by a number of Democrats, most notably Alexandria Ocasio-Cortez, who scored an upset victory in Queens and the Bronx last week and whose platform includes a call for the abolishment of the immigration agency.

Most Democrats, however, have not echoed this call, saying the problem is not with ICE, but how the immigration enforcement agency is being deployed.

“Abolishing ICE will accomplish nothing unless we change the Trump policies,” said Sen. Richard Blumenthal, D-Conn, on CBS’s “Face the Nation” this weekend.

President Donald Trump and some Republicans are pointing to the “Abolish ICE” movement to argue falsely that Democrats oppose immigration enforcement.

On Twitter on Sunday Trump wrote, “The Liberal Left, also known as the Democrats, want to get rid of ICE, who do a fantastic job, and want Open Borders. Crime would be rampant and uncontrollable!”

Those in the “Abolish Ice” movement say they want a more accountable agency that enforces a more humane immigration policy. 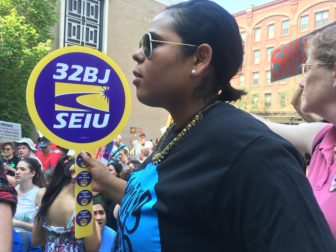 Eva Bermudez Zimmerman stands among protesters at the immigration rally on Monday.

Democrat Eva Bermudez Zimmerman, who is running a primary campaign for lieutenant governor against party-endorsed candidate Susan Bysiewicz, said she stood among protesters at the rally to show solitary for every person who comes to the U.S. with a dream and seeks opportunity.

The 31-year-old labor organizer said she hopes the nationwide protests will help people “realize once upon a time there was a word naturalize in the equation and now that was taken out and people are being removed from families.”

“When you’re looking at the entity, it was reshaped and reformed, and what its creating now is separation, so why not revert back to a day that we had at least the option of immigration, that’s not the option now,” Zimmerman said.

Immigration policy is widening the political divide in the United States and will be a hot issue in this year’s midterm election. ICE’s enforcement actions will be at the center of that.

The Trump administration ended the Obama-era policy of using “prosecutorial discretion” to identify which of the nation’s 11 million undocumented immigrants are a priority for deportation.

Criticized by immigrant advocates for breaking deportation records, former President Obama instructed his administration in 2014 to prioritize the kinds of immigrants that should be prosecuted and removed from the country.

That “prosecutorial discretion,” detailed in a memo, instructed ICE agents to focus on criminal aliens who had crossed the border illegally within the past two years, and those who lived no more than 100 miles from the border. ICE agents were asked to consider the immigrant’s ties to a community, the circumstances of the person’s arrival in the United States, and whether that person had any immediate relative who served in the military.

But Trump ended that policy soon after he assumed office. Now ICE is showing up at schools and courthouses and deporting those with deep ties to their community – and who have American-born children – as well as the spouses of those who served in the military. And removals are happening all over the nation, including Connecticut.

Mariano Cardoso Jr., a 30-year-old Mexican immigrant at Monday’s rally,  said he has felt the country’s immigration system has been broken since he was held by ICE in 2008 despite not having a record.

“We just want justice. My family and I have been here for over 25 years and because the system is so broken we have remained undocumented for all of our time here,” Cardoso said.

Protesters block the main entrance of the U.S. Immigration and Customs Enforcement Hartford offices before police made arrests.

While all Democrats may not embrace the “Abolish Ice” movement, they are united in criticizing the Trump administration’s family separation policy.

The separations occurred because under the Trump administration’s “zero-tolerance” policy, all individuals and families caught crossing the border are being arrested and detained even if most of the violations are misdemeanors or if an immigrant is seeking asylum at a check point.

Because there is a federal consent decree that prohibits the government from detaining children with their parents for more than 20 days, the Trump administration began separating families. More than 2,500 children were put in the custody of the Department Health and Human Services and dozens of organizations were contracted to care for the children and find them guardians.

After Trump issued an executive order ending the policy and a California court ordered a stop to the separations last month, they were halted.

Now the Trump administration has indicated it will detain families together, keeping children in detention centers longer than the 20- day limit. There are also reports of children being deported back to their home countries without their parents.