The plaintiffs in a federal class action lawsuit who settled with the state Department of Social Services want a judge to find the state in contempt for failing to process certain types of Medicaid applications in the mandated time frame.

Legal aid attorneys filed the lawsuit in 2012, claiming that DSS had failed to employ enough workers to process Medicaid applications in the time frame required by federal law, leaving thousands of low-income residents without access to health care coverage.

The suit, which was settled in 2014, set certain benchmarks for processing applications that the state was supposed to meet by April 2015. Last August, the settlement was modified after the state didn’t meet that deadline, extending the full-compliance date to January 2018.

But DSS did not achieve full compliance by then, so on behalf of the plaintiffs, Sheldon Toubman, an attorney with New Haven Legal Assistance Association, filed a motion on May 18 in federal court, asking a judge to schedule a contempt hearing.

According to Toubman’s filing, HUSKY C applications were processed at a rate of 84.9 percent in January — not the 90 percent required in the settlement. HUSKY C provides Medicaid coverage for people with disabilities, low-income seniors who also have Medicare, and people receiving long-term care.

The motion also said that long-term care applications were processed at a rate of 84 percent, not the 92 percent required by the settlement.

The state Attorney General’s office responded in a June 11 court filing, admitting to failing to meet the benchmarks for Medicaid long-term care and HUSKY C.  The state argued, however, that the plaintiffs hadn’t provided all three elements required for a finding of contempt and said that the agency has made improvements over the years.

The state said one reason it didn’t achieve full compliance in January was due to the implementation of its new computerized eligibility management system, ImpaCT. As anticipated, there was a drop in productivity as workers learned how to process applications in the new system, according to the state’s court filing.

The state also highlighted its processing rate for all HUSKY A, C and D applications — which it said was 95.99 percent, based on data available when the filing was made.

The state has worked “proactively to remediate the situation,” the filing said. This included hiring 109 eligibility workers between October 2017 and this June.

The state also created a corrective action plan in April to address shortcomings in the processing of long-term applications, according to the filing.

The state argued that the court should not find contempt in the case because the plaintiffs did not meet all the elements needed for contempt, including proving that the state has not been  “reasonably diligent” in complying with the settlement agreement, according to court documents.

Two weeks after submitting its response, Toubman submitted another filing.

“The hiring of eligibility staff falls under the category of ‘too little too late’ for an agency that has never experienced sustained full compliance with agreed-upon timeliness requirements for HUSKY C and [long-term care], dating back to 2015,” said Toubman in the June 25 filing.

Toubman said that the state failed to explain why the process began in Oct. 2017, after three years of “sustained noncompliance” and two months after the settlement was modified.

“Furthermore, Defendant only commits 14 of these new hires for HUSKY C processing and 3 for [long-term care] processing, barely a fraction of the 109 hires between October 2017 and June 2018,” he said. 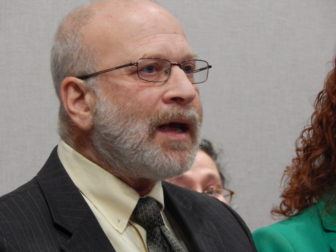 Toubman also said the state did not address whether the 109 staffers represent an increase in its eligibility staff “or merely the replacement of workers recently lost due to the high rate of attrition at the agency.”

“Merely replacing eligibility workers is not likely to address long-standing noncompliance due to limited resources, and hardly demonstrates reasonable diligence to improve matters so as to finally bring itself into compliance,” he said.

Toubman argued that the state “cannot prevail on its claim that the Department was reasonably diligent” in seeking to reach compliance with the modified settlement agreement.

The state has until July 9 to file a response to Toubman’s latest filing. Attorney General spokeswoman Jaclyn Severance said the state will be responding by the deadline.

In an email, DSS spokesman David Dearborn said agency officials “disagree with the plaintiffs’ chronically negative portrayals of DSS and look forward to providing the court with a more holistic view of the agency’s formidable efforts to improve application processing since the inception of the litigation.”