Fallout from President Donald Trump’s summit with Russian President Vladimir Putin dominated the political conversation last week as the president tried to unwind his previous refusal to support the U.S. intelligence community’s finding that Russia meddled in the 2016 elections.

Connecticut lawmakers were among those on both sides of the aisle who called Trump’s initial failure to condemn the Russian meddling, in Sen. Richard Blumenthal’s words, “a betrayal of our national security,” and in those of Republican Arizona Sen. John McCain, “… one of the most disgraceful performances by an American president in memory.”

Trump attempted with limited success to walk his comments back the next day; then, in apparent opposition to his intelligence officials, on Thursday invited Putin for a visit to the White House.

Analysts say voter concern about Trump’s policies and behavior appear to be behind an unprecedented surge in voter registrations in Connecticut, with almost twice as many enrolling as Democrats than as Republicans.

Similarly, Democrats running for Elizabeth Esty’s 5th District seat have raised much more money than their Republican counterparts. (Esty, by the way, has returned nearly $350,000 in political contributions but still had more than $1 million in her campaign account at last report.) Without Gov. Dannel Malloy in the election, however, individual contributions to the Democratic Party are down 58 percent from four years ago.

Perhaps because he is not running again, Malloy was not reluctant to do what legislators would not: order a $10 million study of installing tolls on Connecticut highways. Comptroller Kevin Lembo, who is a voting member of the state bond commission, said he will oppose the expenditure, but it is likely to pass anyway.

As might have been inevitable in any election with five candidates, even an intra-party primary, the knives came out last week when GOP gubernatorial hopefuls David Stemerman and Bob Stefanowski tangled, pointing out each other’s past affiliation with the Democratic Party. Stemerman also launched a TV ad observing that his deep-pocketed rival had not voted for Donald Trump, Mitt Romney, John McCain or any Republican presidential candidate because he had not voted for 16 years. 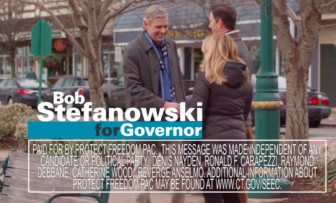 Stefanowski has friends who have his back, however: A Virginia super PAC that is spending $350,000 on his behalf – 100 times the maximum $3,500 contribution an individual can make directly to his campaign.

Meanwhile, with only one month left before the primary, fellow gubernatorial contender Steve Obsitnik qualified for $1.35 million in public campaign financing. Mark Boughton, the Danbury mayor also seeking the Republican nomination (as is Trumbull First Selectman Tim Herbst) sketched out his eight-year plan, if elected, to phase out the state income tax, which currently provides 47 percent of the state’s total $20.6 billion budget.

All of the Republican primary candidates have expressed various degrees of willingness to take a tough position on the state’s relationship with state employees and their unions. They did not attend a Monday forum on climate change, however, where Trump’s support of coal as a national energy source and his withdrawal from the Paris climate accord were harshly criticized.

Trump and the Republican Party’s efforts to dismantle the Affordable Care Act is being cited as the reason insurance companies selling individual and small group health plans in Connecticut have requested significant rate increases for next year.  Plans for creation of a Health Information Exchange, meanwhile, are languishing.

In the Democratic race for governor and lieutenant governor, Ned Lamont, Joe Ganim, (both of whom attended the climate forum), Susan Bysiewicz and Eva Bermudez Zimmerman strove to differentiate themselves to voters in Hartford, who had questions they wanted answered. In her campaign, Bysiewicz, former Secretary of the State, has been mentioning her 31-year-old opponent, a political neophyte, as little as possible. 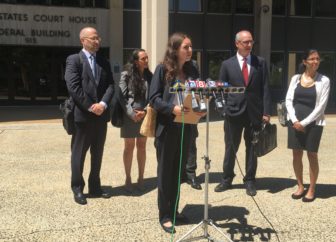 The week had begun with the federal government’s announcement that it was reuniting two children who had been separated from their parents at the Mexican border. The move follows a federal court’s ruling that the separation violated the children’s rights. It was sparked by a lawsuit the children’s lawyers hope could become a national model.

On Wednesday Connecticut joined five other states suing to block the Justice Department from punishing so-called “sanctuary” jurisdictions by putting immigration-related conditions on federal policing grants. The state can use every penny it gets, considering that May’s string of thunderstorms and tornadoes caused more than $13 million damage, prompting the governor to request federal emergency aid.

Life further away from the influence of politics, meanwhile, goes on. The Department of Children and Families is seeking an independent review of the state-run psychiatric facility for children where a pregnant teenager hanged herself last month. Employment in the state improved slightly with the addition of 6,100 jobs. And Veyo, the company hired by the state to transport Medicaid patients to their various appointments, continues to struggle to meet expectations.