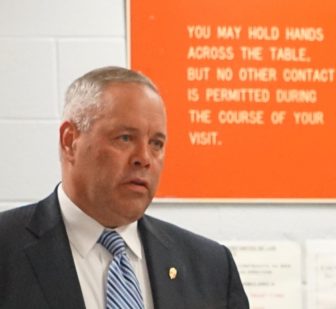 The commissioner of the Connecticut Department of Correction was sued twice this week, an indication of persistent concerns about the quality of medical care being provided to inmates.

The most recent lawsuit, filed Thursday, alleges that a 19-year-old man died after he repeatedly asked for medical attention he never received. A second, a class action lawsuit, claims the department has refused to provide life-saving treatment to those incarcerated with hepatitis C.

Both suits were filed by attorney Kenneth Krayeske of Hartford.

“This is an institutional problem at the Department of Correction that hasn’t been addressed and people are dying,” Krayeske said.

Jaclyn Severance, spokeswoman for the attorney general’s office, declined to comment on either lawsuit Thursday night.

“We will review the complaint(s) and respond appropriately in court,” Severance said.

Legislators and civil rights groups have expressed their concerns in recent months about the quality of medical and mental health care being provided to inmates. Incidents — including an inmate at the state’s lone women’s prison giving birth in her prison cell — as well as large budget cuts, lack of outside oversight, and a history of complaints have fueled these concerns.

In addition, over the last decade, hundreds of prisoners have filed complaints or suits against the department. But it is hard to draw conclusions about whether these indicate systemic problems because the state does not track in any searchable way the resolutions of the complaints and lawsuits. In addition, the correction system doesn’t use an electronic health record system, making it hard, once again, to identify systemic issues.

DOC Commissioner Scott Semple commissioned a review of 25 cases related to health care to get a sense of whether there are systemic issues, but the state has said it will not publicly release that review.

In July, the DOC took over managing prisoners’ health care, after decades of being managed by UConn Health. Since 1997, UConn’s Correctional Managed Health Care (CMHC) had run health care for the state’s prison system under a contract with the correction department.

Krayeske filed a federal civil suit on Thursday on behalf of Keshanna D. Staten, the mother of Karon Nealy Jr. The suit named Semple as a defendant, as well as Dr. Gerald Valletta, the principal physician at Garner Correctional Institution in Newtown, and several correction officers.

Nealy, who was known as KJ, was an inmate in the state’s correctional system. Nealy died on July 27, 2015 at UConn Health John Dempsey Hospital. He was serving a two-year sentence, but only had to serve nine months of it. He was slated for release in September 2015, according to the suit.

Krayeske said KJ has a 3-year-old daughter. “It’s outrageous that she won’t be seeing her dad.” 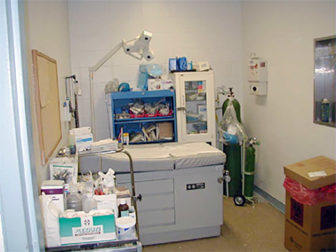 A medical exam area located within the Bridgeport Correctional Center.

Nealy started his sentence at Bridgeport Correctional Center, where he began to complain to medical and custody staff about chronic and painful headaches. While at the detention center, his body became extremely fatigued and weakened. He frequently begged for medical attention, but was denied, the suit said.

Nealy submitted multiple medical request slips but was never seen by a physician, the suit said, and his cellmate noticed Nealy’s rapidly deteriorating condition. His cellmate reported seeing Nealy with patches of hair missing on his head.

Nealy was then transferred to Manson Youth Institution, which is the primary location for inmates under the age of 21. Nealy couldn’t do any physical activity because his body hurt. One of his cellmates said Nealy’s hand in handshakes were sometimes cold to the touch and his fingernails were gray or blue. Nealy also lost his appetite, the suit said.

His cellmate saw Nealy fill out medical slips, but said Nealy only received ibuprofen and stayed in bed most days, complaining that every bone in his body hurt, the suit said.

Around June 27, 2015, Nealy urinated himself, began foaming at the mouth and suffered a seizure. He was taken to the infirmary. A corrections officer struck Nealy several times on the head and told Nealy to “stop faking it” as he transported Nealy to the infirmary, the suit said.

Nealy was then transported to John Dempsey Hospital in Farmington, the suit said. That day, his mother, Staten, went to visit her son at Manson, but was told she couldn’t because the prison was on lockdown. Prison authorities waited three days to tell Staten that her son was transferred to the hospital.

According to the suit, Staten had to wait more than a week to visit her son, and when she saw him, he was awake and alert, and told her, “Ma, I don’t wanna die.”

On July 27, 2015, Nealy died. He died from pulmonary aspergillosis, a fungal infection in the lungs, according to the suit.

During post-mortem investigations by the DOC, Nealy’s medical care was flagged as being below the standard of care, the suit said.

The suit alleges that Semple was “made aware and understood that the care being given to inmates by CMHC doctors and medical staff was substandard.”

CMHC and DOC were parties to a Memorandum of Agreement (MOA) that contained the guidelines and criteria for inmates to receive health care from CMHC. The suit claims that Semple knew that the budget in the MOA was inadequate for managing the health care cost of more than 14,000 inmates.

“Defendant Semple’s failure to supervise employees properly regarding the implementation of the MOA directly resulted in the death of Karon Nealy,” the suit said.

The suit alleges that Valletta failed to provide an appropriate level of care to Nealy and that several correction officers knew Nealy was sick, heard Nealy’s repeated requests for medical assistance, but took no action to help him.

“The Connecticut Department of Correction (“CT DOC”) is refusing to provide life-saving treatment to an unknown number of incarcerated people with hepatitis C,” according to the second suit. “This policy, practice, and custom has resulted  in the suffering and probable death of numerous prisoners, and puts tens of thousands of other prisoners at serious risk of experiencing pain, liver failure, cancer, and death — despite the fact that there are medications that will cure almost all hepatitis C  patients with little to no side effects, and the fact that the medical standard of care requires treatment for all such patients.”

For many years, medical science lacked universally safe and effective treatments for hepatitis C. In 2011, however, the Food and Drug Administration began approving new oral medications, called direct-acting antiviral (DAA) drugs, which have proven to work more quickly, cause fewer side effects and treat chronic hepatitis C much more effectively, the suit said.

The hepatitis C virus causes inflammation that damages liver cells, and is the leading cause of liver disease and liver transplants, the suit said. The prevalence of hepatitis C is much higher in prisons than in the general population.

DOC has no internal census of how many inmates have hepatitis C, the suit said.

The class action lawsuit names Robert Barfield as the plaintiff, who is currently incarcerated in the state’s correctional system.

Barfield, 48, has been incarcerated since 1994. He was transferred to the custody of DOC in August 2012. He was diagnosed with hepatitis C in 2006 while he was in a Nevada prison, the suit said.

Barfield has received intermittent care for his chronic hepatitis C. He has filed many grievances about his lack of treatment. He has on many occasions requested DAA drugs, the suit said.

The class action lawsuit hopes to result in DOC being forced to provide prisoners with hepatitis C appropriate medical care, including DAA drugs.