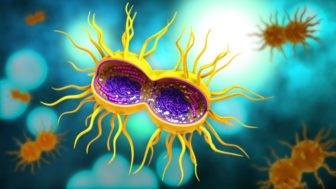 The state’s spike in gonorrhea, syphilis, and chlamydia cases coincides with “steep and sustained” increases seen nationwide from 2013 through 2017, in an analysis released this week by the Centers for Disease Control and Prevention.

The numbers are concerning to public health officials, both nationally and in Connecticut.

“We are sliding backward,” said Dr. Jonathan Mermin, director of CDC’s National Center for HIV/AIDS, Viral Hepatitis, STD, and TB Prevention. “It is evident the systems that identify, treat, and ultimately prevent STDs are strained to near-breaking point.” 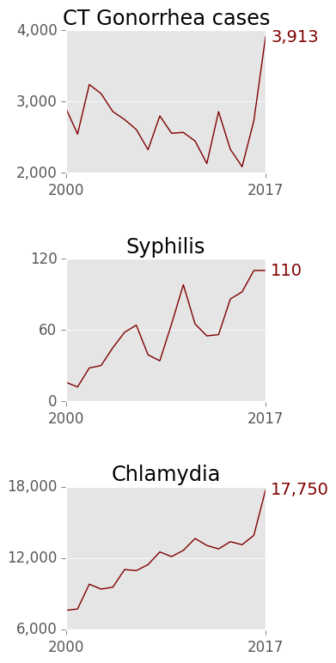 Across the board in Connecticut, each of these diseases hit record high levels last year, according to a CT Mirror analysis of CDC data through 2016 and preliminary 2017 data from the state Department of Public Health (DPH).

That analysis shows that:

While it’s important to note that the 2017 figures are preliminary, state health officials don’t expect the final numbers to alter the big-picture takeaway the data reveals: that these diseases have seen sharp increases, including record-high levels, over a relatively short period of time.

Connecticut public health officials said Wednesday that they have been working for years to lower STD rates through a myriad of efforts, including screenings at high schools and colleges and targeting the groups at highest risk for the diseases.

“Some people might feel bad when they have an STD because it is perceived that they did something wrong or they had sex with the wrong person or it is their fault,” she said.  “Instead of expecting people to come to us, we need to do a better job of going to where they are, both in-person and online, to provide them the knowledge they need so they have the best information to make informed decisions for themselves.”

That trend is starkly evident when examining syphilis rates among men and women. In 2000, men and women in Connecticut had similar rates of syphilis. But in the ensuing 17 years, the data show the rate of men with syphilis has skyrocketed while the rate for women has remained far more stable.

Heidi Jenkins, section chief of STD/HIV/TB/HEP C programs at DPH, said the use of a drug called PrEP, pre-exposure prophylaxis, for HIV can lead to people not using condoms.

Jenkins said growing research shows that those who take PrEP, which can lower the risk of contracting HIV through sex by more than 90 percent, aren’t as likely to use condoms, putting them at risk for other STDs.

Sosa said since the actual number of cases is relatively small compared to other STDs, DPH staff try to connect one-on-one with every person diagnosed with infectious syphilis to make sure he or she is receiving treatment, as well as their partners, as one way to prevent the spread of the disease.

Sosa said better testing might be one of the factors leading to the higher numbers of  gonorrhea and chlamydia cases. Health care providers can now do rectal and oral tests for the disease, in addition to vaginal, urethra and urine tests.

The CDC also released findings this week indicating that drug-resistant gonorrhea is showing up more often in lab testing.

“Over the years, gonorrhea has become resistant to nearly every class of antibiotics used to treat it, except to ceftriaxone, the only remaining highly effective antibiotic to treat gonorrhea in the United States,” the CDC said in press release Tuesday. “… emerging resistance to azithromycin is now on the rise in laboratory testing — with the portion of samples that showed emerging resistance to azithromycin increasing from 1 percent in 2013 to more than 4 percent in 2017.”

Sosa said the DPH in Connecticut is increasing its efforts to make sure health care providers are reporting gonorrhea diagnoses and using the CDC’s recommended treatment for the disease.

She said the department can’t do the same level of outreach with gonorrhea and chlamydia cases because of the sheer numbers of people who have tested positive, but that health officials have multiple, ongoing efforts aimed at preventing and treating these diseases.

DPH focuses on people under age 25 in its chlamydia efforts because this group has the highest rates of the disease. Sosa said the long-term effects of this disease can cause infertility.

Some of DPH’s work has included screenings in high schools, especially those that have school-based health centers and colleges, as well as educational programs throughout the state.

“There are a lot of STDs out there, so this is something we all need to be aware of, not just some people,” Sosa said. “Know what you can do to protect yourself, where to get good info, condoms and testing.”

Check our work! Data and analysis code for this story are available on GitHub here  for those who wish to review it or build upon it for their own analysis.