One of Adrian Colon’s teachers last year pulled him aside and encouraged him to take a high-level Advanced Placement course in U.S. History.

It’s not something he had considered seriously before.

Turns out that extra push was all he needed.

“I thought I might as well. I like history,” said Colon, now a junior at Hartford Magnet Trinity College Academy.

And while he admits he didn’t do very well in the course, he is considering trying to take another AP course next semester now that he knows better what to expect.

“Why not?” said Colon, who is Hispanic.

It’s stories like these – of students who would otherwise be overlooked for enrollment in high-level courses – that has led to a drastic increase in participation in AP courses among Connecticut students from low-income families and — most notably — among Hispanic students.

This increase has meant that the huge disparities in participation in these advanced courses is narrowing for Hispanic students. Five years ago, Hispanic students accounted for about one-in-10 of all the students in Connecticut who took an AP exam, despite accounting for one-in-four of all the high school students in the state. Last year, they accounted for one-in-seven AP test takers.

Nearly 1,400 additional students from low-income families participated in an AP exam since 2013-14– a 50 percent jump. At that time, 11 percent of all test takers were from poor homes, compared to 14 percent last school year. Thirty-six percent of Connecticut students are from poor homes.

It is not clear if the increased exam participation also means enrollment in AP courses has risen in 2017-18. Students are able to enroll in AP courses and not take the end-of-course exam, avoiding the testing fee. However, additional funding provided by the state and the testing company, The College Board, has been provided to waive these fees so that students from low-income homes are not charged. 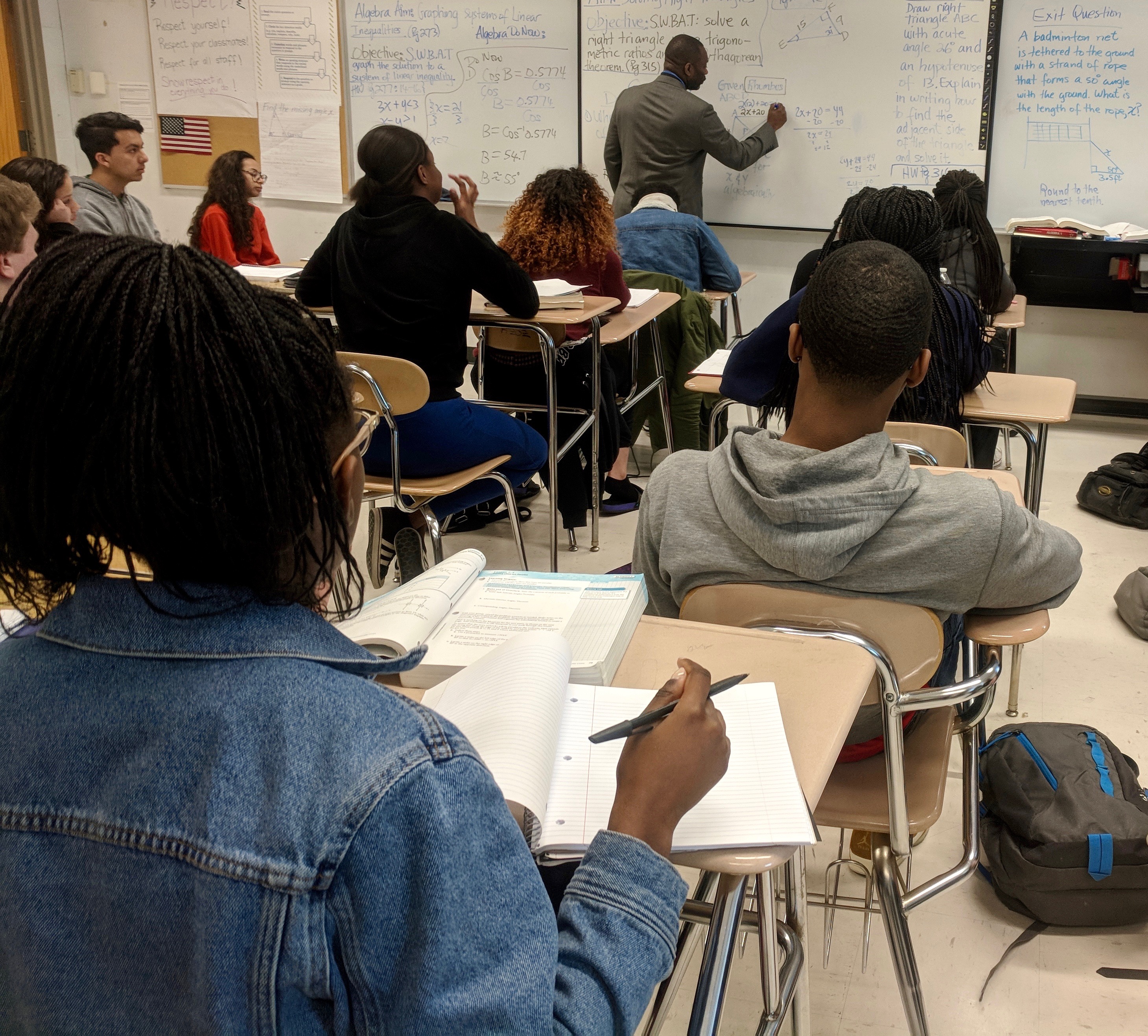 A recent investigation by The Mirror found that while enrollment increased in AP courses throughout the 2016-17 school year, this has done little to narrow the huge disparities. Of the additional 3,400 high school students to enroll in an additional AP course over the last three years, 24 percent came from low-income families even though these same students account for 36 percent of Connecticut’s high school-aged population.

And the gains that have been made among historically overlooked students were concentrated in a handful of school districts, state data showed.

State officials have attempted to increase enrollment in these courses through a variety of approaches. For the last several years nearly 20,000 students receive a letter from the state’s education commissioner urging them to sign up for an AP course since their test scores show they are likely to thrive in a high-level course.

The state also helps low-income districts pay for training for teachers so that more AP courses can be offered. And the state’s zero-to-100 grading system for every school and district in Connecticut takes into account how many students are enrolled in advanced courses – such as AP classes. 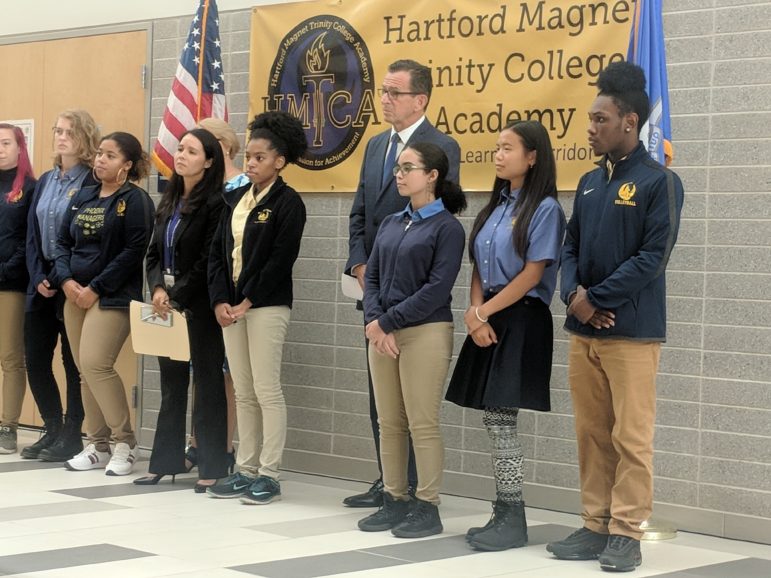 Gov. Malloy with students at a magnet school in Hartford.

“It’s important to push everyone to achieve,” Gov. Dannel P. Malloy told reporters while visiting the magnet school at Trinity Friday afternoon. “These gains did not happen by chance.”

In Hartford, for example, data show that the number of students taking the exam jumped from 287 to 346 over the last four years. However, only 6 percent of all high-school aged students in the district took an AP exam – up from 5 percent in 2015 – which continues to put the district in almost last place among districts in Connecticut for students taking an AP exam.

Statewide, 20 percent of all high school students took at least one AP exam last school year compared to 17 percent four years earlier. West Hartford had the largest rate of its students taking an AP exam: 39 percent. The districts with the highest enrollment rates also tend to be more affluent communities.

The stigma of being smart

Providing an additional AP class sometimes is not enough to increase participation.

Three AP teachers who attended the Friday press conference at Trinity Academy said during interviews afterwards that they try their best to recruit students, but stigmas sometimes accompany being smart in their schools. 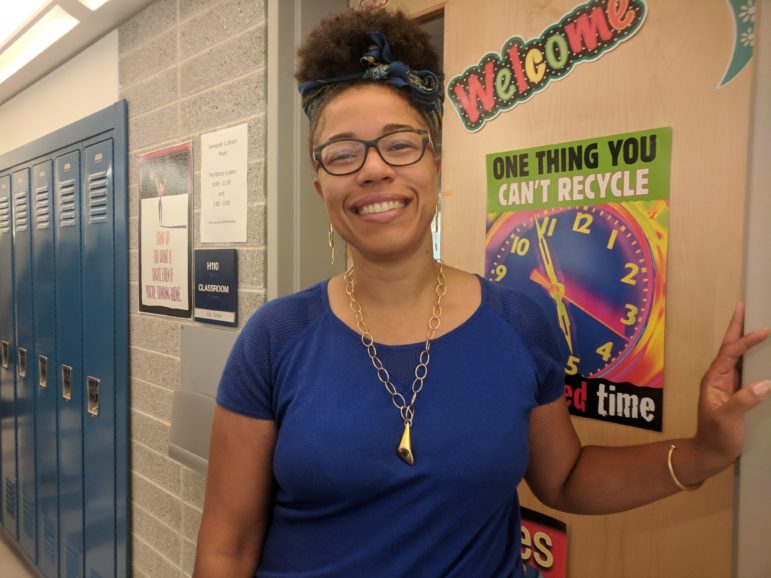 “There’s definitely a stigma around AP, of like being smart, that we have to break through,” said Mel Cavanaugh, a U.S. History teacher.

“Being smart is a good thing,” she regularly tells her students.

This stigma affects certain groups of students more than others, the teachers explained.

“I think it’s more within minority students, where that stigma holds true. It’s never really been a problem populating my courses with white students, but it’s more of a concern when it comes to especially male black students taking my AP literature classes … and Hispanic boys,” said Summer Tate, an English teacher.

Makenna Lindsay, a Jamaican-American student at the school, explained the anxiety she felt when she showed up for an AP computer science class to find she was the only black female who enrolled. 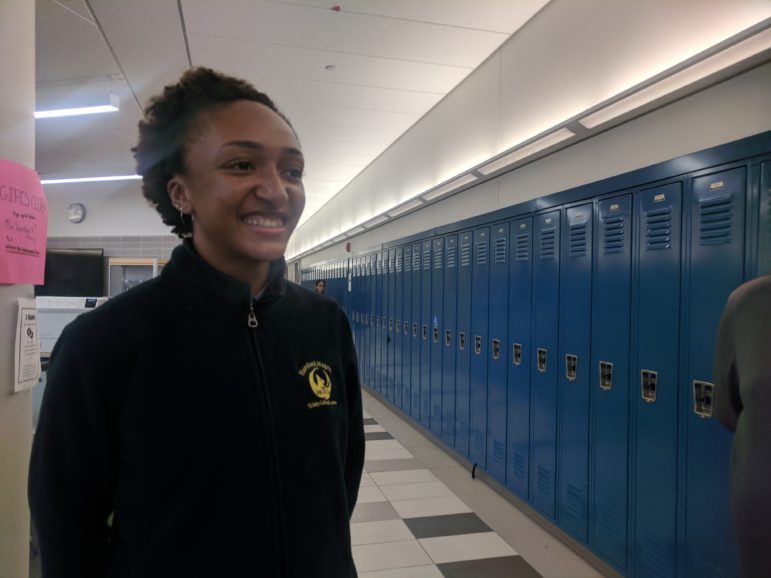 Makenna Lindsay, ‘It comes down to, do I have a place in this class?… Do I fit in?’

“I think it always comes down to, do I have a place in this class? In this world of advanced academics, do I fit in?” Makenna said. “We, as black students, we have a lot more pressure on us because we seem to be representing a lot more people. If one black student does something, it’s kind of impacting everybody else. So it is a lot of pressure to make sure we’re doing our best at all times, so we don’t give anybody any negative ideas about our community.”

She tried to withdraw from the class, she said, but wasn’t allowed to do so by the school. She’s glad she stuck with it.

“It was one of the best opportunities of my life,” Lindsay said.

She has since gone on to pass five more AP courses and plans to complete three more before she graduates, for which she hopes to receive college credit.

Data and analysis code for this story — which involved combining AP test taking data from College Board with state Department of Education enrollment data — are available in this Python notebook on GitHub.