It’s a common refrain during elections: If the state cuts education aid, local school districts will be forced to lay off teachers and other educators.

“Our local schools would be cut and about 8,600 teachers would be out of a job under his plan,” Ned Lamont, the Democratic candidate for governor, warned in September, referring to his Republican opponent’s promise to eliminate the income tax over eight years. 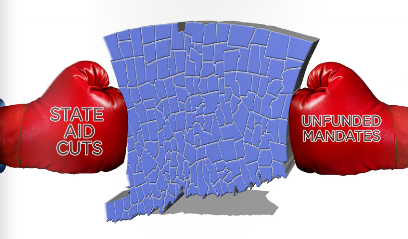 The cover of a Connecticut Conference of Municipalities newsletter in 2017

A few weeks later, the Connecticut Democratic Party tallied the potential layoffs at 10,320 in a press release.

The drumbeat of warnings against mass teacher layoffs – or property tax hikes – has only increased as Election Day nears.

Republican Bob Stefanowski has said he would rely on increased revenue from a strong economy and yet-to-be defined spending cuts to pay for the elimination of a state income tax — a tax that generates about $9.7 billion, or half the state’s revenue, each year. So the debate raises a larger question: What impact would more cuts in municipal aid have on schools?

The answer is complicated.

For the first time in recent history, state lawmakers in fiscal year 2017 cut education aid. They did it again in 2018.

Local educators, who opposed the cuts, warned both times that staffing reductions would follow.

They were partially right.

A review by the Connecticut Mirror shows that a cut to major school grants in 2017 coincided with a big drop in school staffing levels – even after adjusting for declining enrollment. More than 1,700 positions were lost. But in 2018, when school grants were cut again, staffing increased by 355 positions statewide.

These reductions are likely small compared to what might be necessary if the state had to fill a $9.7 billion hole in the budget to make up for the loss of state income tax revenue, although Stefanowski has insisted he would not fill that hole by making cuts to education.

The recent reductions to state education aid follow years of staffing increases that outpaced declining enrollments. In fact, between 2004 and 2016, staffing levels grew by 12.6 percent, even while enrollment declined by 6.1 percent.

Growth in staffing isn’t neatly predictable based on state funding levels, however.

Let’s unpack that. (Jump to see how your town changed here)

Each year, the state sends about $2.5 billion to cities and towns to operate local schools.

Funding levels are determined by the state’s Education Cost Sharing (ECS) formula for almost 80 percent of this aid, with the remaining portion paying for things like magnet schools, after-school programs and special education services. Those grants have also been cut in recent years.

Separately, the state pays for retired teachers’ pensions and school construction debt payments, a nearly $2 billion cost each year that the state is unable to control due to contractual constraints.

Between 2004 and 2015, almost every town experienced increases in state aid. 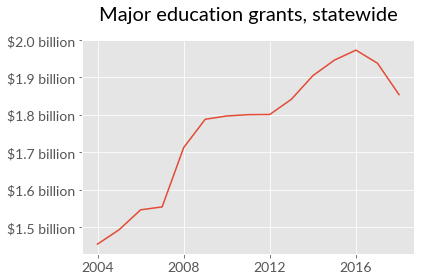 We looked at how staffing levels at schools changed – or didn’t – following cuts to the ECS grant.

Staffing has generally trended upward, but not every year.

Staffing has declined in four of the last 14 years, but no year-to-year decline was as steep as the 2016-17 school year, when districts across the state collectively shed more than 1,700 full-time staff members.

However staffing increased in 2018, despite further state education spending cuts. 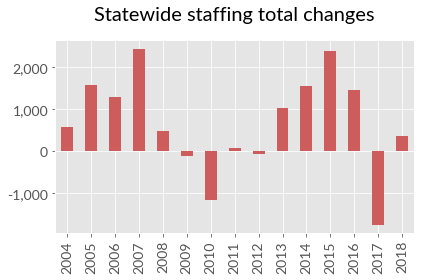 Staffing is increasing while enrollment is declining.

Over the last 11 school years, enrollment in public schools throughout the state has dropped by nearly 40,000 students – an almost 7 percent decline. Staffing increased during that time by about 3,600 positions, or 4 percent.

Enrollment drops are expected to continue in Connecticut at one of the fastest rates in the country, the U.S. Department of Education estimates.

This means, state and local officials will have to grapple with how many staff they need – and how many they can afford. 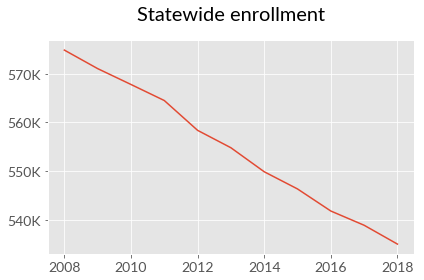 One might assume that since enrollment has been declining, even the big staffing reduction in 2017 would be proportionate to enrollment.

The funding cuts in 2017 coincided with a staff reduction of 0.2 per 100 students. That was not the case in 2018, when staffing again increased, despite state cuts. 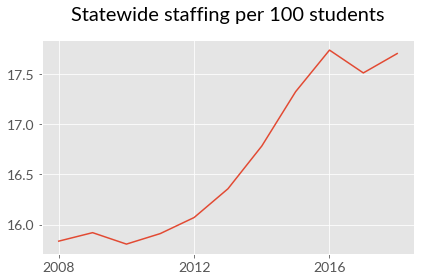 To get a better sense of what those “per 100 students” figures look like, envision a district with a perfectly consistent enrollment level of 1,000 students every year. By the statewide averages, that district would have had 158 employees in 2008 and 177 in 2018 – an increase of 19 staff members to serve the same student population.

Firing teachers as a result of budget cuts is something most people (and voters) can imagine pretty clearly: Bigger elementary school classrooms means less one-on-one attention for their children. In middle and high school, when students move from classroom to classroom, maybe that would mean cutting the arts or shop class.

But in reality, general classroom teachers are not the only employees that keep school districts running. Teachers made up about 38 percent of all school employees in 2018 – down from 41 percent in 2008.

The next biggest chunk of employees was non-instructional staff, which accounted for the biggest part of the 2017 staffing declines. These positions include custodial, security, nurses, and transportation staff. 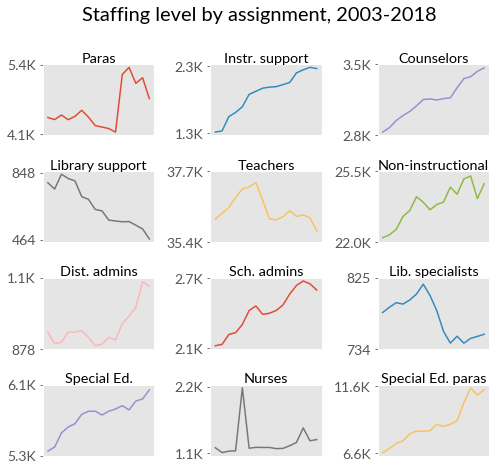 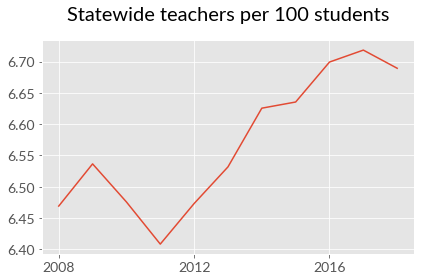 6. Poor districts are much more dependent on state money than wealthy districts

Of course, if state aid is cut, municipal leaders can raise taxes or shift funding from their non-education programs to pay for schools if they are willing.

Some towns are much more dependent on state education aid than others. That’s because the poorest municipalities have a smaller tax base to draw funding from to support their schools.

The state’s wealthiest districts are far more insulated from the effects of state cuts. Greenwich – the state’s wealthiest community – relies on these grants for less than two percent of its budget, compared to Hartford – the most impoverished – which counts on them for 63 percent of its school funding. These figures underestimate how dependent poor districts are on state grant money, because many other smaller state grants support their schools, as well. 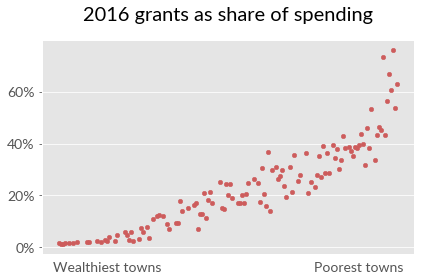 7. A different story in every town (look up your town here)

There were 100 districts that received less state aid in 2017 – but only 67 of those districts lost grant money on a per-student basis.

Only 20 of those 67 districts saw decreases in teacher staffing per student.

When we look at the scenario for each district, it becomes clear that there are no easy conclusions. Each district is different.

In Norwalk, enrollment has been increasing, bucking the state trend. There, the selected grant funding we looked at dropped more than half a million dollars in 2017 and then again 2018. Initially, teacher staffing dropped from 6.2 to 5.4 per 100 students in 2017, but in 2018, staffing went back up to 6.2.

Torrington, however, where enrollment has been declining, also saw a half-million dollar cut to grant funding in 2017 and then another $100,000 cut in 2018. Because of the declining enrollment, grant funding only decreased on a per-student basis in 2017 and then went back up in 2018. Still, teacher staffing dropped both years in that district from 6.9 per 100 students in 2016 to 6.5 and then 6.3 the next two years.

You can use the tool below to see what is happening in your town.

View data and code for this analysis in our GitHub repository.