Hatred in New Zealand felt around the world

The monstrous slaughter of 49 Muslim worshipers in New Zealand by a single gunman spread alarm throughout the world last week. Mosques in the United States went on high alert against similar attacks; and the online world attempted to cope with the implications of the terrorist’s live video stream of his hateful work.

The news overshadowed the scandal earlier in the week surrounding two prominent actresses and others who allegedly paid bribes and committed other frauds in order to get their children into prestigious colleges like Georgetown University and Yale.

After two political rebukes by Congress, (one of them about the Saudi Arabian war in Yemen led by Connecticut Sen. Chris Murphy) President Donald Trump issued his first veto – striking down a measure that would have blocked his use of Defense Department funds to build a wall between the U.S and Mexico.

Trump had already expressed his deepest condolences to the people of New Zealand. But after signing the veto said he doesn’t believe there is an upturn in domestic terrorism and that “it’s a small group of people that have very, very serious problems.”

And a lot of guns.

Concern about the proliferation of firearms in the United States was what motivated U.S Sen. Chris Murphy and Rep. Jahana Hayes, D-5th District, to introduce a resolution that would clarify that federal education funds cannot be used to arm teachers. 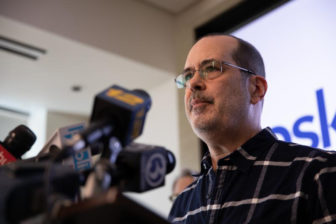 David Wheeler, whose son Ben was killed at Sandy Hook, speaks at a press conference after the Connecticut Supreme Court ruling.

Their announcement came on the same day that the Connecticut Supreme Court ruled that the parents of the children slain at Sandy Hook Elementary School could sue the maker of the AR-15 rifle used in the killings.

Only days earlier, Kristin and Michael Song, parents of 15-year-old Ethan Song who accidentally and fatally shot himself, had been pleading with lawmakers to tighten gun-storage rules.

The same hearing had led to the expulsion of a gun-control advocate who sent a text message imagining shooting NRA members and a legislator opposed to gun control. Who was that legislator? State Sen. Rob Sampson, a Republican who is comfortable in the minority – or alone.

Connecticut is now in the thick of its legislative calendar, when proposals of all stripes are trotted out for public scrutiny. Some get traction, some don’t.

Bills allowing for commercial hemp farming met little resistance, but the notion of legalizing recreational marijuana is a complex issue with tentacles in local zoning, taxes, and the erasure of criminal records for those convicted of minor offenses. Another bill would enable consumers to obtain their prescription medicines through a program run by Comptroller Kevin Lembo’s office.

An aid-in-dying or doctor-assisted suicide bill will get what is likely to be an emotional airing Monday, where proponents think they have a better chance of success this year. And after recent outbreaks of measles elsewhere in the country, Connecticut lawmakers want to repeal a law that grants a religious exemption to the requirement that children must be vaccinated in order to attend school.

The lottery system used to determine how children get into some Connecticut magnet schools will now face a discrimination charge in federal court after a U.S. District Court judge denied the state’s effort to have the case tried by the Connecticut State Supreme Court.

Meanwhile, the controversy over a plan to consolidate Connecticut’s 12 community colleges continues with the advancement through committee of a bill that would give control of the matter to legislators rather than the Board of Regents for Higher Education. The Regents, meanwhile, voted to raise tuition at their four universities by 5 percent and

are still considering what to do about the community college rates.

Some of the state’s legislators want to challenge Gov. Ned Lamont’s tax reform plans with one of their own: higher income taxes on the wealthy. There is also a move to broaden the definition of “family member” as it pertains to qualifying for paid family medical leave.

Speaking of family, the legislature lost one of its own when Rep. Ezequiel Santiago, D-Bridgeport, after a decade in the General Assembly, died Friday of an apparent heart attack.