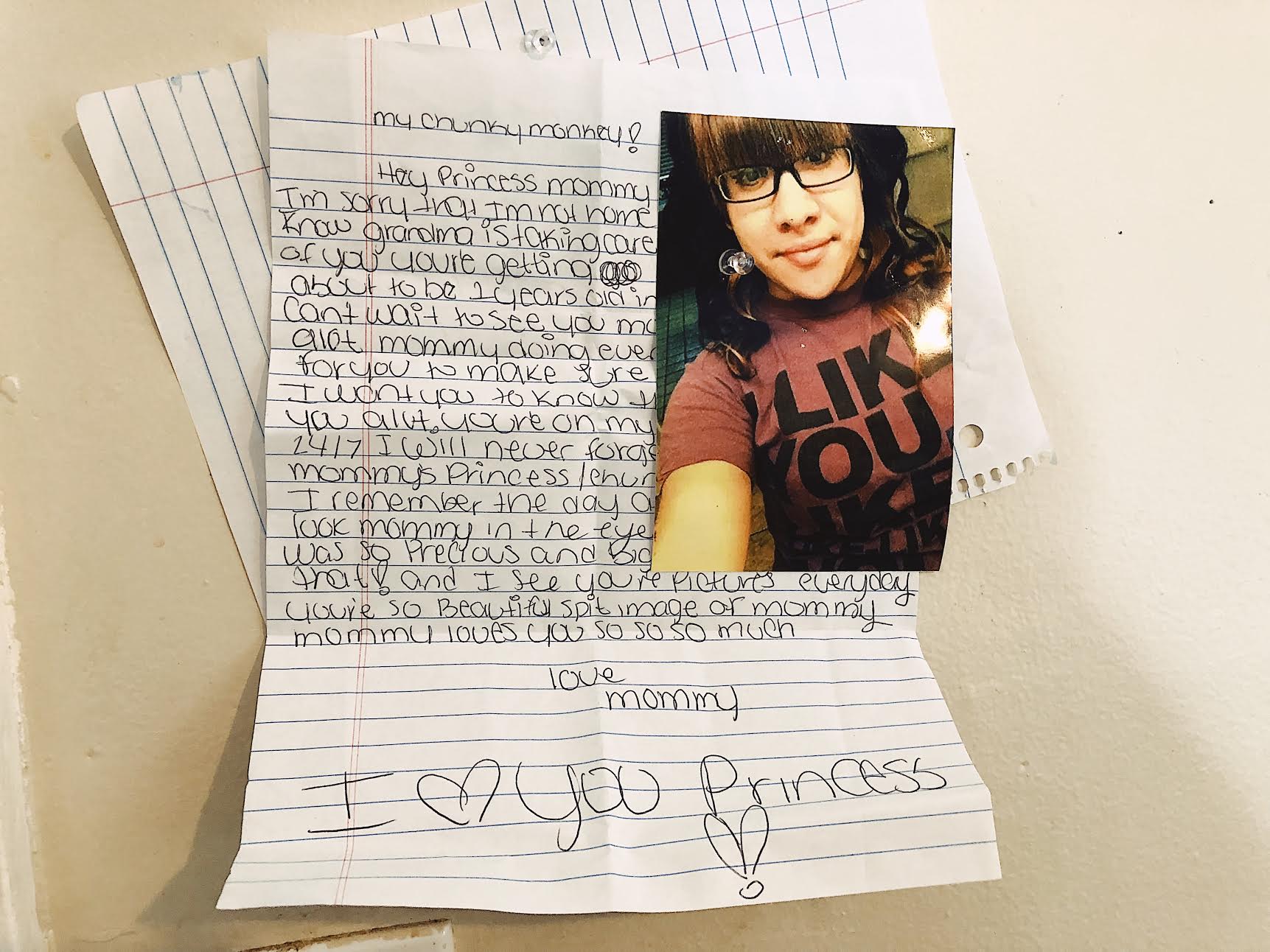 A photo of Tianna Laboy is pinned to a wall at her mother’s home along with a letter Tianna penned for her baby.

A pregnant inmate had complained of pain numerous times to staff at York Correctional Institution during the week before she gave birth in her cell last year, but medical workers did not perform an assessment that would have determined she was in labor, nor did they tell a doctor about her abdominal pain or send her to an emergency room, according to a report unsealed Friday by a federal judge.

Tianna Laboy was eight weeks pregnant when she was admitted to the Niantic prison in August 2017. Officials considered her pregnancy high risk because of medical conditions that could have caused her to deliver pre-term.

Her health appeared normal until Feb. 7, 2018, when Laboy told staff she was experiencing abdominal pain, according to the report. She made similar complaints on Feb. 10. On Feb. 12, she again told prison staff she had stomach pains. Medical workers sent her back to her cell with a pitcher of ice water and a hot cloth for her stomach.

Laboy’s cell mate told officials Laboy was up most of the night of Feb. 12, 2018, and made several requests to be seen by an obstetrician. Suffering from abdominal pressure, Laboy got up to use the toilet, and ultimately, during the morning of the 13th, delivered her baby into the bowl, the report said. The cell mate helped take the baby out of the toilet and wrapped her in a towel to keep her warm. The new mother then used an intercom to tell guards she had delivered.

A correction officer found her standing over a pool of blood holding a crying infant. The baby was born about a month premature.

The report, prepared by Department of Correction employee Jennifer Benjamin, was part of a months-long internal investigation into what led the 19-year-old inmate to give birth behind bars. Benjamin reviewed records and departmental policies, interviewed numerous staff members, and viewed video footage from inside the prison during her review.

The report was completed earlier this year, but the DOC refused a Freedom of Information Act request from the CT Mirror to release it, claiming the document was in “draft form” and part of an ongoing investigation. Laboy’s attorneys later filed a motion to lift a seal on the report. The judge granted their request Friday.

Laboy and her mother are suing prison workers, former Correction Commissioner Scott Semple and UConn Health – which until last July was managing inmate health care across Connecticut – alleging denial and delay in care. The DOC has since ended its agreement with UConn amid a flurry of lawsuits and complaints about the quality of medical services in the prisons.

“This is a woman who told you she was in labor over the course of three days. And they never sent her to an ER, never called an ambulance,” said DeVaughn Ward, one of the attorneys representing Laboy in the lawsuit. “They essentially told her to go back to her cell like she was an animal.”

After Laboy gave birth, two employees were walked out of York and told not return until the correction department finished its investigation.

“This is a woman who told you she was in labor over the course of three days. And they never sent her to an ER, never called an ambulance. They essentially told her to go back to her cell like she was an animal.”

Benjamin’s report identifies Michelle Fiala, who spent 14 years at Hartford Hospital as an OBGYN postpartum and nursery nurse, as the nurse at York with the most relevant experience at the time Laboy gave birth. Correction officers phoned the medical unit on the day of Laboy’s delivery at 4:42 a.m. and 6:15 a.m. Fiala denied receiving the calls, but security cameras showed otherwise. Fiala also claimed she performed an assessment, but camera footage shows Laboy had only been in the medical unit for about 10 minutes.

Fiala could not be reached for comment Friday evening.

Touting her experience as a labor and delivery nurse, Fiala reportedly told staff that Laboy was not in labor the night she delivered her child. A nervous correction officer told another employee assigned to the medical unit that Laboy had blood clots. According to the report, Fiala took the phone and told the officer on the other line, “if there were blood clots the baby would be coming soon, so there is no way there are blood clots.”

Within minutes of that exchange, the report notes, officers discovered Laboy had delivered and sounded a call for a medical emergency.

The report recommended the state make the following changes:

A spokeswoman for the Attorney’s General’s Office, which is defending the state in the lawsuit, declined to comment on the report Friday.

DOC spokeswoman Karen Martucci said Friday she was out of the office and didn’t know if the agency had a response to the report. Martucci also said she isn’t sure whether Fiala worked for DOC or UConn Health, which at the time Laboy gave birth in her cell was managing inmate health care for the state. She confirmed that Fiala is not currently employed by DOC, but did not know if the nurse has been fired.

Advocates questioned Friday what, if any, precautions the state has made to ensure that others are not treated like Laboy. Staffing levels and inadequate training are part of a “systemic failure on DOC’s part to provide minimally adequate care to prisoners,” said Dan Barrett, the legal director of the ACLU of Connecticut.

“We should not be placing prisoners in this position,” Barrett added. “No one is sentenced to prison and to neglect.”

The report’s release comes on the heels of a ruling Thursday by a U.S. District judge that Laboy’s lawsuit can advance. The state had argued Laboy could not bring her suit because she had not pursued all administrative remedies at her disposal. Judge Janet C. Hall rejected that argument.

“However, an administrative remedy may be ‘unavailable’ even in cases where the plaintiff clearly understands the administrative process,” Hall wrote. “Under the circumstances of this case, there was no ‘available remedy…’ after Laboy’s baby was born, there was nothing she or the prison could do to change the facts surrounding its birth, which remain in dispute.”

It is rare for an incarcerated woman to give birth in her cell. Of the 753 live births performed by jailed women across the U.S. between 2016 and 2017, just six did not occur in a hospital.

Ward said he was taken aback by the report’s finding that nurses at York aren’t required to have training in gynecology and obstetrics. He also was frustrated by the disclosure that there was no on-call OBGYN for the prison system’s hundreds of female inmates.

“The fact that it’s not mandatory, that it wasn’t mandatory in 2018 and it’s still not mandated under law, is troublesome,” he said. “There has to be a more comprehensive look at how the department handles medical care for its female inmates.”

“It’s really a black asterisk on your prison system to have a birth in a jail cell,” Ward said. “You have to have a complete systematic breakdown across a number of departments to have an incident like that happen.”