Correction officials refuse to release video footage of the birth 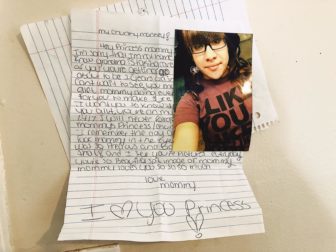 A photo of Tianna Laboy is pinned to a wall at her mother’s home along with a letter Tianna penned for her baby.

Sixteen months after a woman gave birth on the toilet in her locked prison cell, the state Department of Correction has yet to provide any answers about the circumstances surrounding the incident.

Immediately after Tianna Laboy, an inmate at York Correctional Institution in Niantic, had her baby on Feb. 13, 2018, DOC officials launched an internal review into the events leading up to the birth. Two employees were walked off the site and told not to return while the investigation was underway.

A report on the incident was recently completed by a correction employee, but the department refused a Freedom of Information request from the CT Mirror this week for the document, saying it is in “draft form” and part of an ongoing investigation.

DOC also denied an FOI request for video footage, known as a “code white” video, that depicts the moments during and after the birth, and for staffing schedules the day of the incident.

“Some investigations take more time than we would like and we are doing everything we can to expedite the process,” Karen Martucci, a spokeswoman for the department, said in a written statement.

“With that being said, the seriousness of this particular incident cannot be underrated, therefore the Department of Correction is committed to ensuring that this incident is thoroughly and accurately investigated.”

She did not elaborate on why the investigation has taken more than a year and did not return a call for subsequent comment.

Laboy and her mother are suing prison workers, the former correction commissioner and UConn Health – which until last July held a $100 million, no-bid contract to manage inmate health care across Connecticut – alleging denial and delay in care. DOC ended its agreement with UConn amid a flurry of lawsuits and complaints about the quality of medical services in the prisons.

Kenneth Krayeske, a lawyer representing Laboy, questioned why the DOC’s review still isn’t complete after 16 months. The department completed an internal inquiry into the case of Karon Nealy Jr., an inmate who got sick and died behind bars in July 2015, within 10 months.

“That was a death,” said Krayeske, who also is representing Nealy’s family in a lawsuit against the state. “Tianna’s should have been done.”

The results of the review into Nealy’s death were not made public until April 2019 when Krayeske’s office obtained records from the state through a discovery process. The legislature passed a bill in June that requires the swift release of internal investigations and other prison documents when a case of death or permanent injury is filed with the claims commissioner on behalf of an inmate.

Krayeske said he has received portions of the completed DOC report on Laboy and expects to get the full version in the coming weeks.

“There are certainly portions of that investigation that are not drafts,” he said. “We can’t approach reform [in the prison system] without knowing what they’re doing.”

The report was shared with the state attorney general’s office. Sam Norton, a spokesman for the office, also denied a CT Mirror request to release the document, citing attorney-client privilege.

“The report was provided to us in connection with pending litigation,” Norton said in a statement. “We consider it subject to attorney-client privilege.”

Laboy gave birth in her cell in 2018. She is suing the state, alleging denial and delay in medical care.

Under the Connecticut Freedom of Information Act, agencies have the right to deny requests for reports while investigations are pending. Once complete, the findings are subject to release under FOI law.

“I would question where they are in the process,” said Mike Savino, president of the Connecticut Council on Freedom of Information. “If the investigation is done and the report is ready, and all they’re waiting on is disciplinary action, that report should be public. The public deserves to know … what happened. They deserve to know if it was conducted fairly, and according to procedures.”

Tom Hennick, public information officer for the Connecticut Freedom of Information Commission, said completed reports should be released promptly, though there is no uniform standard for how quickly a document must be made public.

“Promptness is clearly in the eye of the beholder,” he said.

The DOC has denied access to the video on the grounds that it could pose a safety risk, including “the risk of harm to any person or the risk of an escape from, or a disorder in, a correctional institution.”

While correction officials claim the exemption prevents them from releasing footage taken inside the prison, other agencies have disclosed video captured in similar facilities. In 2015, amid mounting public pressure, the Department of Children and Families released seven hours of surveillance footage from inside the Connecticut Juvenile Training School that showed youths being forcibly restrained and dragged into solitary confinement.

Freedom of Information advocates say DOC could release the Laboy video and the time logs if it determined the public’s right to know outweighed a potential safety risk.

“Without having access to the videos, I would urge the department to apply that as narrowly as possible, and not to use it as a way to withhold records that are vital to transparency,” Savino said of the exemption.

If contents of the investigation, including the video and report, are not released, Sen. Gary Winfield, a co-chair of the legislature’s Judiciary Committee, said lawmakers might intervene, even if just to watch the footage and determine how to proceed.

“Transparency is critically important because the power of life and death is given to police officers or corrections officers,” Winfield said. “As a government, I think we have a responsibility to handle human lives with care.”