Courtney and Hayes say they will vote to impeach Trump 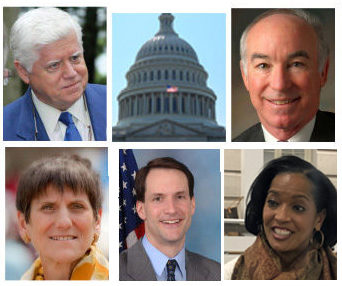 “I will solemnly support the articles of impeachment introduced this week when they come before me for a vote in the House,” said Courtney, D-2nd District.

Hayes, D-5th District, said “impeachment is not a course I wanted to pursue.”

“I came to Congress to make a difference, not to impeach a president,” Hayes said.

But, after reviewing the two articles of impeachment that are expected to be approved by the House Judiciary Committee late Thursday, Hayes said she would support them when they come to the full House for a vote, probably next week.

“It is clear to me that the president attempted to use the Office of the President to demand a foreign leader investigate an American citizen for political gain,” Hayes said.

With their support for impeachment, Hayes and Courtney join Reps. John Larson, D-1st District, and Rosa DeLauro, D-3rd District, in publicly stating they will vote to impeach the president. Only Rep. Jim Himes, D-4th District, who had a major role in the impeachment inquiry as a member of the Intelligence Committee, has not yet declared how he’ll vote.

The impeachment articles focus narrowly on the president’s interaction with Ukraine.

Courtney, a member of the House Armed Services Committee, said he read both the report from House Intelligence Committee Democrats, who took the lead in the impeachment inquiry, and the Republican minority report. He said the administration’s 55-day hold-up of military assistance to Ukraine was indefensible.

“During that time, the Los Angeles Times reported that 25 Ukrainian soldiers lost their lives in combat,” Courtney said. “The gravity of this feckless decision is clear and stunning.”

The second article will center on a contempt of Congress charge brought after Democrats determined Trump kept administration officials from testifying or providing documents in the impeachment inquiry.

“It is my intention to support the rule of law and uphold Congress’s constitutional role as a coequal branch of our government, and vote in favor of Article Two,” Courtney said.

It is expected most House Democrats will vote for Trump’s impeachment.

Some Democratic defections are expected, however, even though the articles were narrowly focused on the Ukraine issue at the insistence of moderates in the party who represent districts won by Trump in 2016.

Hayes said “as the impeachment discussion progressed, I remained committed to not weighing in publicly, believing it was important that everyone had the chance to examine the case for themselves.”

She also said she “deliberately chose not to comment without having had a chance to review all the evidence and study the full articles as drafted.”

“As I listened to the testimony, I became more concerned about the actions of the president,” Hayes said. “While some may argue these actions do not merit impeachment, to do nothing and normalize this behavior would be a dereliction of my oath of office.”

If the Judiciary Committee adopts one or both articles, as expected, Trump would join Andrew Johnson, Richard Nixon and Bill Clinton as the only presidents who faced specific charges over alleged misconduct. Johnson and Clinton were impeached; Nixon resigned before the House held an impeachment vote.