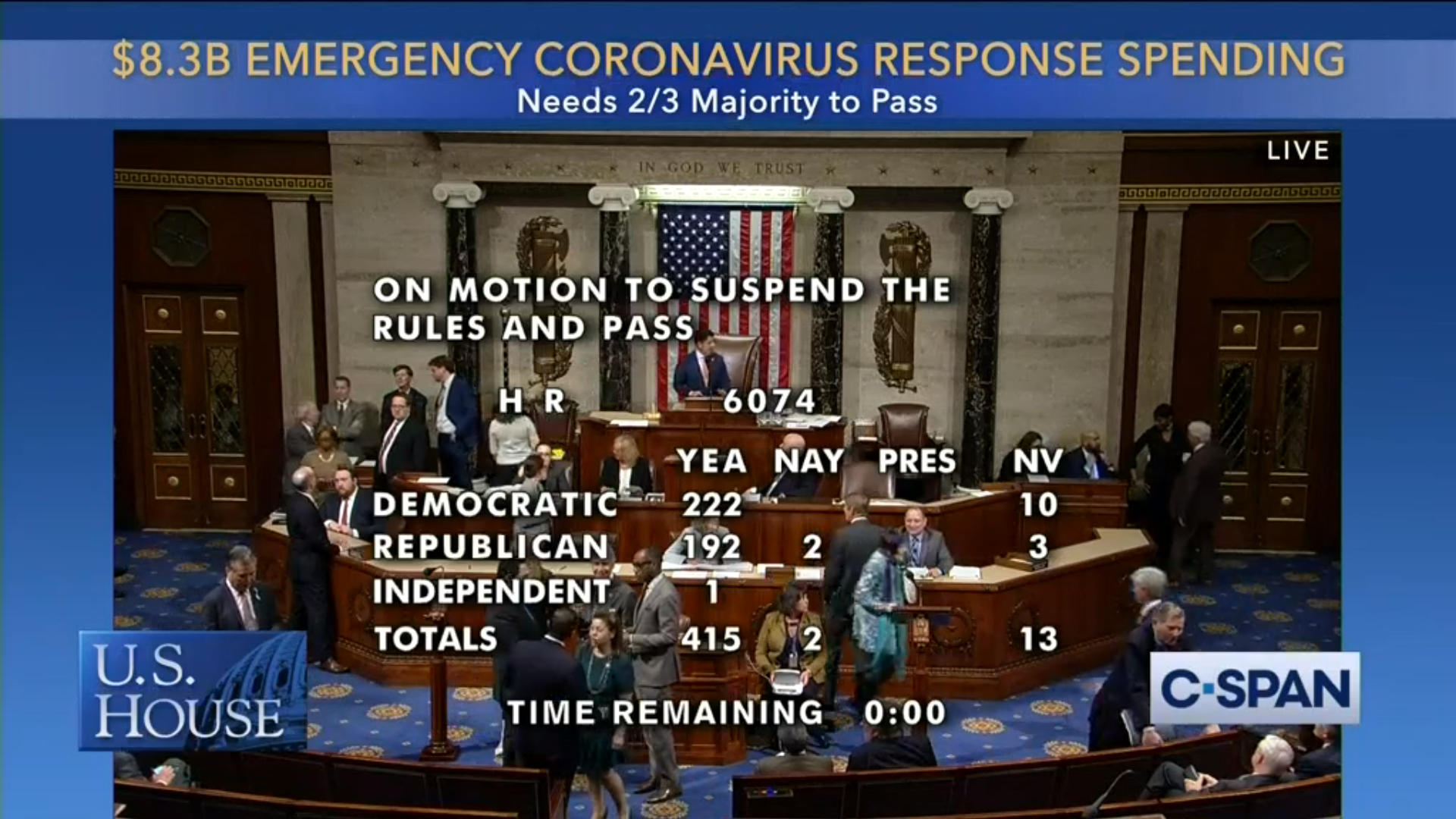 The U.S. House voted Wednesday to allocate $8.3 billion for coronavirus response. The Senate is expected to vote later this week.

Washington – In a rare bipartisan effort, the U.S. House of Representatives approved an $8.3 billion package Wednesday that will provide Connecticut with millions of dollars to respond to coronavirus.

The emergency spending bill, more than three times larger than what President Donald Trump had proposed, will give the states $950 million, of which $475 million must be allocated within 30 days. Each state would receive at least $4 million, and states will have to provide a spending plan within 45 days of enactment.

That money could pay for state laboratory testing to detect positive cases and surveillance for the disease. The bill could also fund state efforts to trace infections to identify additional cases and other public health needs.

“This robust funding is desperately needed, and I am proud to see its quick passage in the House of Representatives.”

Approved on a 415-2 vote, the package will also give the federal government more resources to fight the outbreak, which has claimed 11 lives in the United States, so far.

The Senate may vote on the bill as early as Thursday. Trump is expected to sign it.

Connecticut Gov. Ned Lamont said this week that he would wait until Congress approved the coronavirus bill before asking the legislature for money to combat the virus, indicating that may not be necessary.

“I think (the feds) are going to do something aggressive,” he said.

In a compromise between Republicans and Democrats, $300 million was included in the package to ensure the cost of a coronavirus vaccine – probably a year away from development and distribution – is “fair and reasonable” when the federal government purchases it for Medicaid and Medicare patients. The bill also gives the Secretary of Health and Human Services authority to make sure vaccines are affordable in the commercial markets.

DeLauro, who chairs a House Appropriations subcommittee with authority over the budget of federal health agencies, was a vocal critic of Trump’s initial $2.5 billion coronavirus response plan, which proposed shifting funds from other HHS programs, including one that provides heating assistance to low- and moderate-income people. The bill approved Wednesday restored that money.

After the vote, DeLauro called the supplemental funding package “a win for the American people.”

“This robust funding is desperately needed, and I am proud to see its quick passage in the House of Representatives,” she said.

While there are no confirmed cases yet in Connecticut, the state lab in Rocky Hill has begun to test residents for coronavirus, also known as COVID-19.

That lab has tested eight people for the virus, and all the tests came back negative.

During bill negotiations Wednesday, Democrats were also able to include a provision that was initially resisted by Republicans — changing Medicare rules so seniors could have doctor visits through telemedicine, since they are uniquely susceptible to coronavirus.

The bill also provides $6.5 billion for the Department of Health and Human Services, with $2.2 billion designated specifically for the Centers for Disease Control and Prevention. Another $3.1 billion is going to the Public Health and Social Services Emergency Fund and $836 million to the National Institutes of Health.

“Through this funding, we commit to making sure we are putting a robust plan in place and everyone has access to treatments.”

There’s also a $500 million provision to reimburse state and local governments for money spent on coronavirus from the time it was first detected in China in January.

Yet another $1 billion is slated to be spent on procuring pharmaceuticals and medical supplies for Community Health Centers, and to improve medical surge capacity. About half of that money will be dedicated to state and local health agencies in areas with a shortage of medical supplies.

“We urgently need a coordinated, fully funded, whole-of-government response to keep us safe from the widening coronavirus epidemic,” said Rep. Jahana Hayes, D-5th District. “Through this funding, we commit to making sure we are putting a robust plan in place and everyone has access to treatments.”