Historic measure will bring $2 trillion in relief to the nation, billions to Connecticut 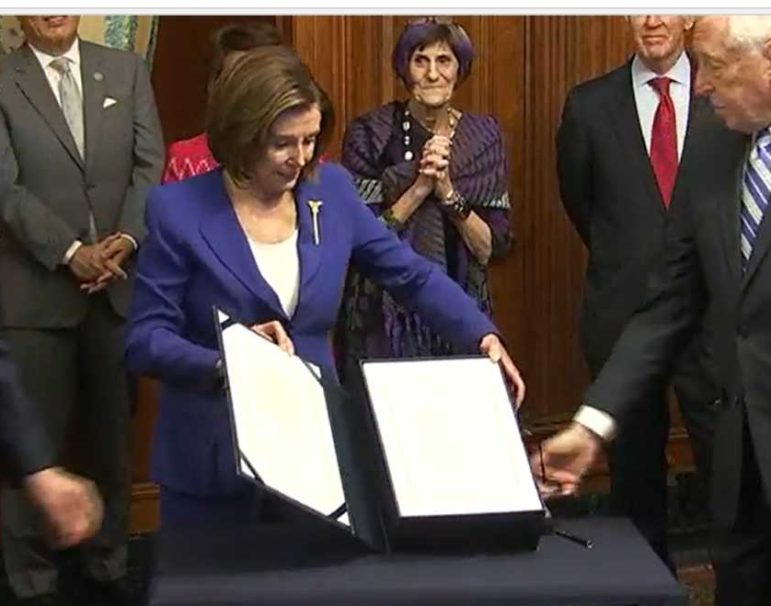 With Rep. Rosa DeLauro behind her, House Speaker Nancy Pelosi embosses the corona relief bill and sends it on its way to the White House.

Washington – In a vote fraught with drama and urgency, U.S. House members who had rushed to Washington on Friday approved an historic bill to bring $2 trillion in relief to a nation besieged by the corona virus emergency.

“If we’re asking our health care professionals, first-responders, grocery employees, and other essential workers to continue to work — so should Congress,” said  Larson. The legislators in the chamber sat far apart in order to maintain correct social distancing. At least one member wore rubber gloves.

Since the Senate had unanimously approved the package on Wednesday, the House’s approval allowed President Donald Trump to sign the bill into law a few hours later.

The rescue package is designed to bring immediate relief to almost all sectors of the nation’s economy. It will increase unemployment benefits for the jobless by $600 a week, and extend those benefits to part-time, contract and self-employed workers. It authorizes the federal government to send a $1,200 check to most adult Americans with an additional $500 to each of their children.

Billions of dollars in loans and grants will be available to large and small businesses. That is expected help defense contractors in Connecticut, especially manufacturers involved in the hard-hit aerospace industry

“We … won significant relief and protections for members in the aerospace and manufacturing industries who work for companies with national security interests,” said International Association of Machinist President Robert Martinez Jr.

Under the bill, companies that accept federal funds are prohibited from reducing their workforce by more than 10 percent. Corporations that have between 500 and 10,000 employees are also prohibited from outsourcing and offshoring  jobs and must remain neutral in union organizing campaigns.

The bill contains $130 billion for the nation’s hospitals and about $1.5 billion in direct assistance to Connecticut’s government.

Another $150 billion would be spent on a medical “Marshall Plan” to provide protective equipment for health care workers, testing supplies,  new construction to house patients, and an increase of the Strategic National Stockpile.

Lawmakers said the coronavirus crisis merited the unusual method the massive bill was rushed through Congress. “This is the biggest economic and health crisis the country has ever faced,” said DeLauro in a speech before the vote.

While DeLauro praised the long list of new programs the bill provides, she and other progressive Democrats did not get everything they wanted in the legislation which was negotiated among the White House and Republican and Democratic leaders in the Senate.

While the bill would allow broader enrollment in the food stamp program, it would not boost those benefits by 15 percent, something DeLauro had fought for. Nor did it expand paid sick and personal leave beyond the increases in those programs mandated by an earlier stimulus bill approved by Congress. 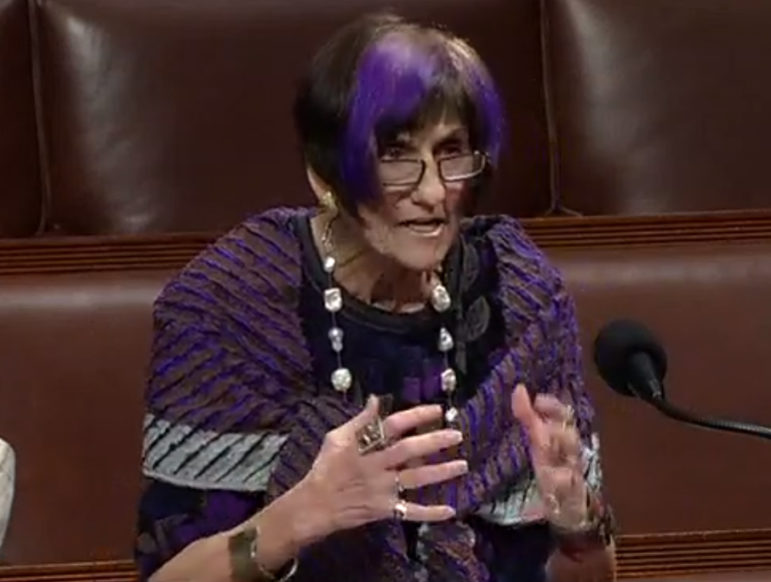 U.S. Rep. Rosa DeLauro during debate over the bill.

DeLauro, and many other Democrats, said a fourth bailout is needed. “While this funding is crucial, let me be clear, it’s a start,” she said.

And Himes said “our work in Congress is not done – we must throw everything we have at this virus, like Americans always have…”

The vote was taken amid last-minute drama.

Rep. Thomas Massie, R-Ky., who argued voting without a quorum is unconstitutional, called for an in-person recorded tally in a move that threatened to sideline the bill. Massie’s objection meant House leaders were forced to resort to parliamentarian maneuvering.

His maneuver brought him swift rebuke from both parties and Trump, who lambasted Massie in a series of tweets, calling him a “third rate grandstander” and suggesting Republican leaders boot him out of the party.

To keep social distancing standards, lawmakers were limited to no more than 30 in the House chamber at a time. So the other lawmakers who came to Washington  gathered in the visitor’s gallery over the chamber to show that a quorum, at least half of the U.S. House’s 435 members, were present.

That allowed the bill to be considered under a voice vote.

Courtney was among those in the gallery. He reported afterward that there was “far more than a quorum” of members present to vote for the bill, adding that it was an extraordinary showing “considering the distance it took some members to get here.”

To Courtney, the expansion of unemployment benefits, help to small businesses and money for the health-care workers at the front line of the pandemic were among the most important provisions in the package. “The bill hit all the right notes,” he said

There was widespread bipartisan support for the bill, but some Republicans, including Massie, objected to its size and the money the legislation will spend on unemployment benefits and other social programs.

“The sad truth is that most of the money in this bill is unrelated to fighting the coronavirus,” said Rep. Ken Buck, a conservative lawmaker from Colorado. “We believe the fight against the virus will take six to eight weeks, yet this bill spends money decades into the future.”

Rep. Alexandria Ocasio-Cortez, a  Democrat who represents a Queens-based district in New York, said the bill was “shameful” because it provided corporation with billions of dollars in grants and loans, while providing those in need with “crumbs.”