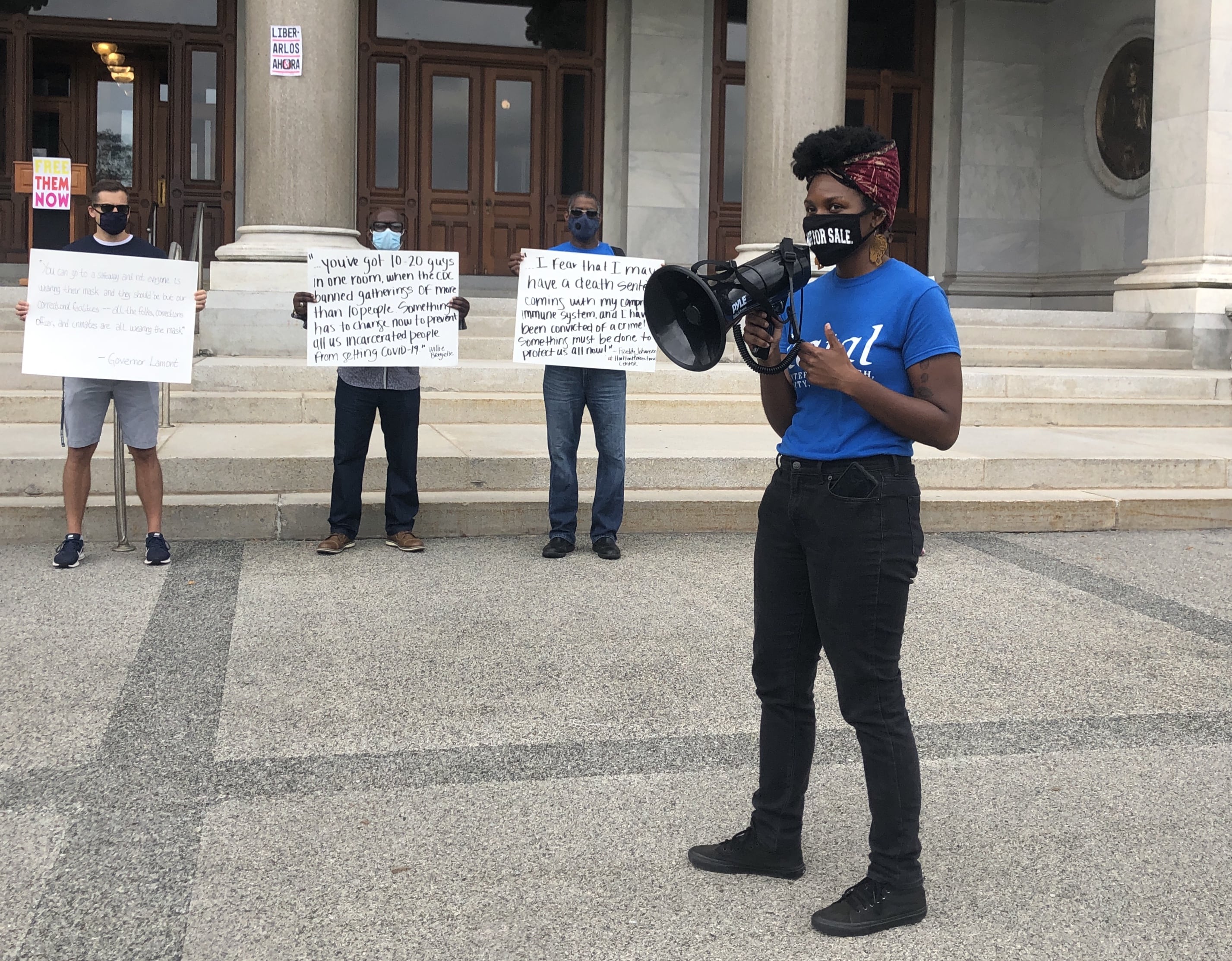 The day before lawmakers are to gavel in their second special session of the COVID-19 era, two groups of advocates met at the Capitol Tuesday to chide them for neglecting to address conditions of confinement in state prisons and jails.

“We’re calling for help, and they’re not doing anything,” said Isaiah Terry, a member of the Katal Center for Health, Equity and Justice, the group that held the first of two corrections-related press conferences on Tuesday.

The police accountability bill passed in the summer session included a handful of provisions that dealt with corrections: As of Oct. 1, prison staff will have a duty to intervene when their peers use illegal or excessive force. And, the inspector general — once the Judiciary Committee decides which of two candidates to send to the legislature for appointment — will investigate whenever someone dies in prison to determine whether the death was the result of a criminal action.

But those are responses that occur after an abuse and don’t address systemic issues, like the use of solitary confinement, said Joseph Gaylin, an organizer with Stop Solitary CT, which hosted the day’s second press conference.

“There still has been no real conversation in the legislature about corrections accountability,” said Gaylin.

Members of Katal called on the governor and other state officials to release inmates from state correctional facilities to spare them from contracting COVID-19. They read testimony from people currently incarcerated who have been unable to adequately wash and protect themselves from the virus, who have financial difficulty paying for costly phone calls to stay in touch with their families, and who have had trouble getting medical care during the pandemic.

The Department of Correction reports that there have been 1,558 positive cases of COVID-19 in state prisons and jails as of Sept. 18. According to The Marshall Project the number of known cases per 10,000 prisoners is 925% higher than Connecticut overall.

Katal sent a letter to Gov. Ned Lamont’s office on Monday demanding he and other officials take immediate action to protect incarcerated people from the virus, and to come up with a clear, transparent and comprehensive plan to protect the lives of people held in the state’s prisons and jails. The group noted that the governor has twice canceled meetings with them and others who have loved ones in custody, an engagement the administration has not rescheduled.

“If you took the time to meet with these directly impacted CT residents, you would better understand how to create effective public policies that center the most vulnerable and at-risk individuals of our state, the letter reads. “Yet you have repeatedly shown disinterest in the concerns and experiences of people, especially people of color, impacted by mass incarceration.”

The state reached a legal settlement with the American Civil Liberties Union of Connecticut in July that required prison officials to increase medical monitoring for people who test positive for the virus, prioritize elderly and medically vulnerable inmates for release, and provide inmates with cleaning materials and personal protective equipment.

Many of the terms of the agreement are listed in Katal’s demands for the special session, though Katal’s calls are more wide-ranging. They are pressing for an “aggressive plan for emergency release” of people from correctional facilities and a mandate that the department make public their plans for prevention and management of the virus in each correctional facility. They are also urging those plans be subjected to oversight by an independent body of health experts.

They also are pushing for the DOC to ease its housing restrictions so incarcerated people aren’t stuck behind bars. The first man who died from the virus in prison had been approved for discretionary release but was unable to get out because he did not have an appropriate home sponsor.

Last week the department announced it had completed its second round of mass testing. Three percent of the prison population tested positive for the virus.

Sen. Gary Winfield, D-New Haven, one of two legislators who showed up at the press conferences, suggested the low infection rate was not due to a coordinated effort among officials.

“We shouldn’t be happy that by chance our rates were low,” Winfield said. “That’s not because of any action that we took.”

Winfield said what’s needed now is clarity around the state’s pandemic plan for its correctional facilities, so officials can undertake a comprehensive effort that is cognizant of the needs of prison staff and inmates alike.

“What I think needs to happen is there needs to be a coming together to actually talk about what we’re doing, why we’re doing it and whether or not it’s the right thing to do,” he said.

The pandemic’s effect on the incarcerated population will be a focus of next year’s legislative session, Winfield said. He anticipates a bill that would make it easier for people to get compassionate release, since the existing laws are not designed to allow people to get out of prison to avoid COVID-19.

“You have to be basically at death’s door in order to get some compassion,” said Winfield.

The co-chair of the Judiciary Committee, Winfield pledged to raise a bill released by Stop Solitary CT earlier this year. The measure, dubbed the PROTECT Act, would empower an oversight group to investigate and make recommendations to the DOC; create regulatory standards to effectively end solitary confinement; and close Northern Correctional Institution, the state’s most secure prison.

“In January when the full session opens, since our leaders are not going to be discussing us in this session, we need to make sure that the boldest, most courageous legislators are leading in the House and the Senate to make sure our voices are heard,” said Barbara Fair, a member of Stop Solitary CT’s steering committee. “Passing the PROTECT Act is a mandate for 2021.”

In a statement, a spokesperson for the DOC noted that the newly nominated commissioner, Angel Quiros, has said the department will explore the possibility of closing more than one correctional facility.

“However, the process is still in the planning stages, and as such no specific facility has been identified,” said the spokesman, Andrius Banevicius.

The department has reduced its use of administrative segregation — commonly known as solitary confinement — over the past few years, Banevicius said, a reduction the new commissioner is committed to continuing.

“Even though there is a high threshold for placement of an offender in AS, there are times when it is warranted,” Banevicius said. “For example, as the consequence of a significant act of violence which jeopardized the safety of offenders and/or staff members.”

Banevicius said placement in administrative segregation is temporary, and that the department’s use of the confinement has clearly defined, finite timeframes. Those in segregation can access group programming or recreation, make phone calls and interact with counselors and clinicians.

Nonetheless, Banevicius said, “Commissioner Quiros is committed to working with legislators and stake holders on all topics affecting the DOC during the next legislative session.”