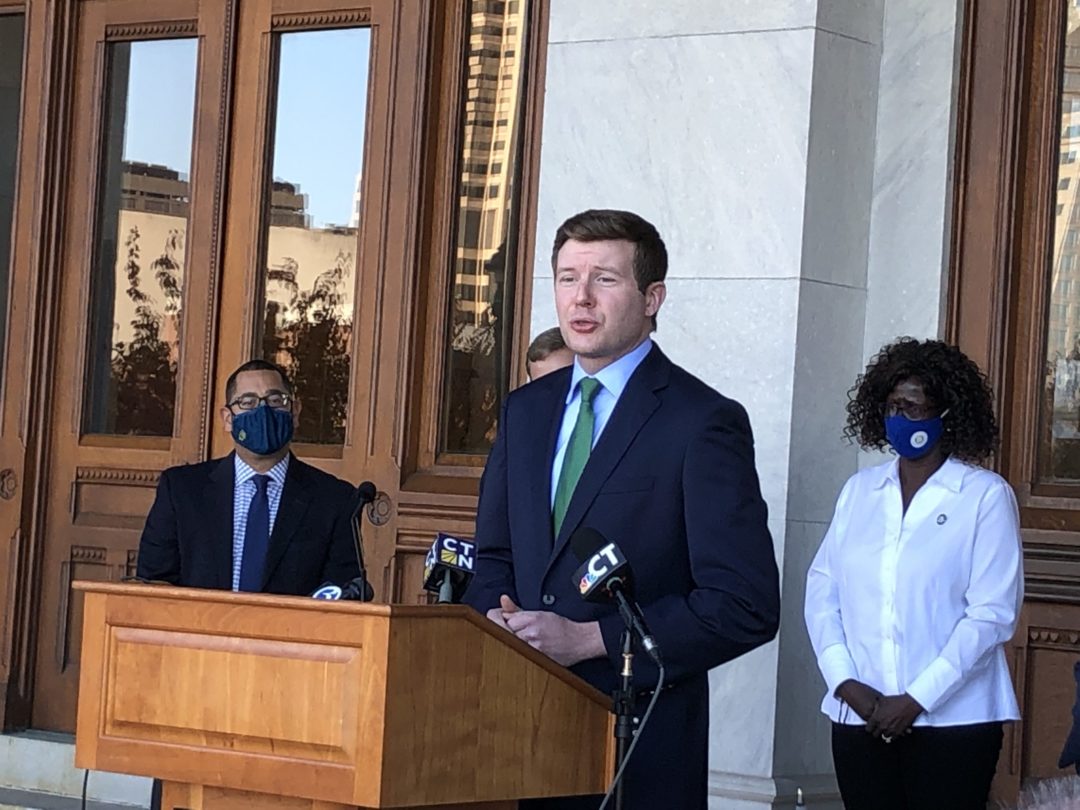 With the pandemic battering the economy and carving deep deficits in state finances, House Democrats called Tuesday for Connecticut to increase borrowing to preserve key programs and to take advantage of low interest rates.

But the move could put them at odds with Gov. Ned Lamont, who tried unsuccessfully to force his fellow Democrats in the legislature on a “debt diet” during his first year in office.

And while House Democratic leaders insisted there is considerable room for more borrowing under one statutory bonding cap enacted three years ago, they failed to note a second legal limit that could make it difficult to put more on Connecticut’s credit card.

“It’s no secret that Connecticut faces big challenges when it comes to our economy and our budget,” said Rep. Sean Scanlon, D-Guilford, who replaces East Hartford Democrat Jason Rojas as the new House chair of the Finance, Revenue and Bonding Committee.

Ritter said the House Democrats, which hold 97 out of 151 seats, are not necessarily planning to dramatically increase borrowing, but he suggested Connecticut has plenty of room on its credit card.

State government borrows funds for most capital projects by selling bonds on Wall Street, and Ritter noted Connecticut has hardly strained the credit card limit it sent in 2017.

“We’re not even close,” Ritter said.

And Rep. Patricia Billie Miller, who co-chairs the finance panel’s Bonding Subcommittee, noted that borrowing has become crucial for Connecticut cities and towns. More than $150 million in non-education grants provided to municipalities annually comes from borrowed funds rather than from the state budget.

But there’s a second restraint on the state’s credit card — and this time Connecticut likely is already over the limit.

An older-yet-still-enforced system caps outstanding debt but incorporates planned borrowing — that is, borrowing that has been authorized by the legislature but not actually carried out — into the tally of how much debt the state can carry.

And this limit goes up or down, depending on state tax receipts. As the state brings in more money, it can pay for more debt, and the limit rises; as revenue drops, it can’t pay for as much, and the limit drops.

But the legislature hasn’t recalibrated that limit since before the pandemic hit — and when it does, it will find it has less money than projected, and thus a lower borrowing limit.

When legislators adopted a two-year state budget in May 2019, they assumed there would be $17.4 billion in tax receipts flowing into the General Fund this fiscal year. Legislators normally would have adjusted the forecast this past May, just two months before the 2020-21 fiscal year began, but they ended the session early because of the coronavirus pandemic.

The Lamont administration — which has been warning legislators since late April that tax revenues won’t meet expectations — now projects receipts for this fiscal year at $15.8 billion.

The top Republican in the House, Rep. Vincent J. Candelora of North Branford, also has been urging Democrats since July to adopt more realistic revenue projections — and thereby align the borrowing limit with the more grim financial reality.

Though legislators returned to the Capitol for special sessions in July and October, the revenue schedule was not revised. Republicans charged Democrats were delaying suspending capital projects — many of which were planned in their home districts — until after the Nov. 3 state elections.

“I asked the finance committee to fulfill its statutory obligation [to revise the revenue schedule], and that was completely ignored,” Candelora said Tuesday. “Now we hear ‘let’s borrow more?’”

Connecticut ranks among the most indebted states, per capita, in the nation, and debt service costs consume more than 10% of the annual budget, a problem that prompted Lamont to press for his debt diet immediately upon taking office in January 2019.

The new governor and legislature battled for more than 14 months before settling this past March on a two-year, $4.7 billion bonding plan that shattered Lamont’s planned debt diet by more than $1.1 billion.

The Federal Reserve Bank lowered interest rates to near zero in March and left them unchanged at its November meeting. The Fed’s chair, Jerome H. Powell, said rates will remain low for the foreseeable future with the national labor market far from recovered.

Connecticut has regained about 60% of the jobs lost since the pandemic struck in March, and the state Department of Labor still is issuing more than 200,000 unemployment benefits per week.

But Lamont’s administration already is projecting a nearly $1.3 billion deficit in the fiscal year that began July 1 — a gap that represents 6% of the General Fund.

And while revenue projections aren’t as gloomy as they were amidst the pandemic, due largely to a robust stock market helping Connecticut’s wealthy households, the administration also is forecasting gaps in excess of $1 billion in each of the next two fiscal years.

“We’ve got so much ground to cover,” Walker said, adding that while she’s optimistic President-elect Joe Biden’s administration will send more relief to states in 2021, Connecticut must be prepared to protect its core functions.