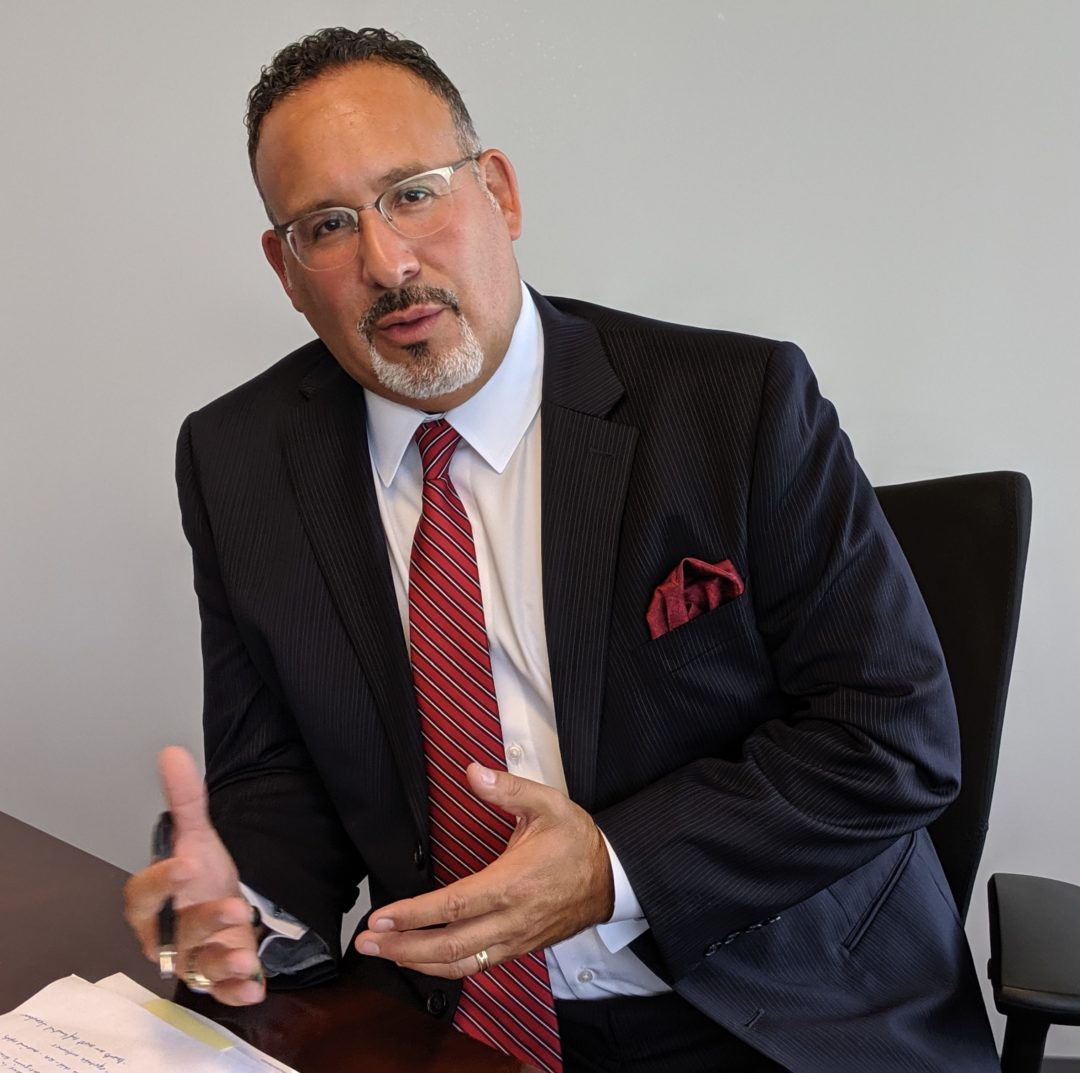 Miguel Cardona is the first Latino to be appointed state education commissioner. He was born in a Meriden housing project and, at 28, was the youngest school principal in Connecticut.

Connecticut’s education commissioner, Miguel A. Cardona, was introduced to a national political audience Wednesday evening as one of “two lesser-known educators” who have emerged as top candidates to join President-elect Joe Biden’s cabinet as the education secretary.

Quoting four sources, the Washington Post reported that Cardona and Leslie T. Fenwick, dean emeritus of the Howard University School of Education, are now the candidates of the moment, though “the situation remains fluid, and no decisions have been made.”

Gov. Ned Lamont was an early and prominent endorser of Biden, but a source told CT Mirror that Cardona came to Biden’s attention through a California educator on the president-elect’s transition committee, not the governor.

The source said the vetting of Cardona is serious and substantive.

Cardona came to the attention of the president-elect’s team through Linda Darling-Hammond, who is leading the transition’s efforts on education issues and appointments, a role she also played for Barack Obama in 2008. Darling-Hammond and Cardona served on one or more national education panels in the past five years, the source said.

Darling-Hammond, the president of the California State Board of Education, took herself out of the running in November, according to EdSource.

Cardona has significant policy and political instincts, a compelling personal biography and a self-deprecating manner. He describes himself as “a goofy little Puerto Rican born in the Yale Acres complex in Meriden.” Yale Acres is public housing.

“Education is the great equalizer: It was for me,” he told legislators during his confirmation hearing as Lamont’s commissioner. “Our success as a state will be dependent upon how we support students who are learning English as a second language.”

Cardona was named in 2019 as the education commissioner, the first Latino to hold the post in a state that has one of the largest achievement gaps in the United States between its Latino and non-Hispanic white students.

His doctoral dissertation in 2011 for the University of Connecticut’s Neag School of Education suggested a realpolitik approach to education reform. It was titled, “Sharpening the Focus of Political Will to Address Achievement Disparities.”

In it, he revealed frustration with the “patterns of complacency” for English learners that have led to “institutional predeterminations” for them. He complained of limited opportunities to participate in extracurricular activities and access to reading materials in Spanish.

“Without a focused commitment of political will among educational leaders to make the necessary improvements in academic programs, gaps in student achievement will likely persist,” he wrote of English learners in Connecticut. “From my perspective, it seems that the normalization of failure of the ELL students continues to influence practices.”

Cardona entered kindergarten in Meriden only speaking Spanish. He was blunt when asked earlier this year how the state educates English-as-a-second-language learners.

Cardona looked deflated the day he joined Lamont in announcing the closure of schools during the early days of the COVID-19 pandemic. He knew the students of greatest need would be the biggest losers of an extended closure.

“The inequities have really come to the surface,” he told CT Mirror. “The impact that that’s going to have – it will last generations.”

He appears to have influenced Lamont on the question of schooling during the pandemic. The governor has deferred to local systems while strongly urging they remain open for classroom instruction at the younger grades.

Urban lawmakers bristled, however, at Lamont when he released a state budget in February that cut funding for tutors, instructional materials and professional development for teachers in Bridgeport, Hartford, New Haven and Windham. His cut would leave just $1.9 million in state aid dedicated to bilingual programs for nearly 44,000 English learners.

“Our bilingual education is woefully undermanned and addressed,” state Rep. Toni Walker, D-New Haven, the co-chair of the legislature’s powerful budget-writing committee, told Cardona during a public hearing before lawmakers suspended the legislative session in March. “It is important that everybody gets an opportunity at a solid education.”

Cardona began his career as an elementary school teacher in Meriden. In 2003, he became a principal at age 28, the youngest in Connecticut, and principal of the year in 2012. Then he became an assistant superintendent. As an administrator, he would take new teachers on a tour of the city’s economically and racially diverse neighborhoods.

He was an adjunct professor in a University of Connecticut education and leadership program that has been praised by Darling-Hammond, and he was a co-chair of the Connecticut Legislative Achievement Gap Task Force.

“Addressing the achievement disparities in CT is more than just our moral obligation. It makes fiscal sense,” Cardona wrote in the task force’s report. “In Connecticut, the costs of remediation or incarceration are greater than education. In order to address the conditions that perpetuate underachievement, we must confront poverty and systemic barriers while constantly improving upon our practices in all State agencies.”

That report recommended tackling the obstacles created by poverty by doing things like providing day school subsidies and universal preschool so children don’t start kindergarten behind those who could afford a high-quality preschool. The panel also recommended creating incentives to allow more affordable housing to be built in high-resource school districts.

Cardona did not return a call for comment Wednesday.

In an interview after he was named commissioner, Cardona talked about being a victim of stereotyping.