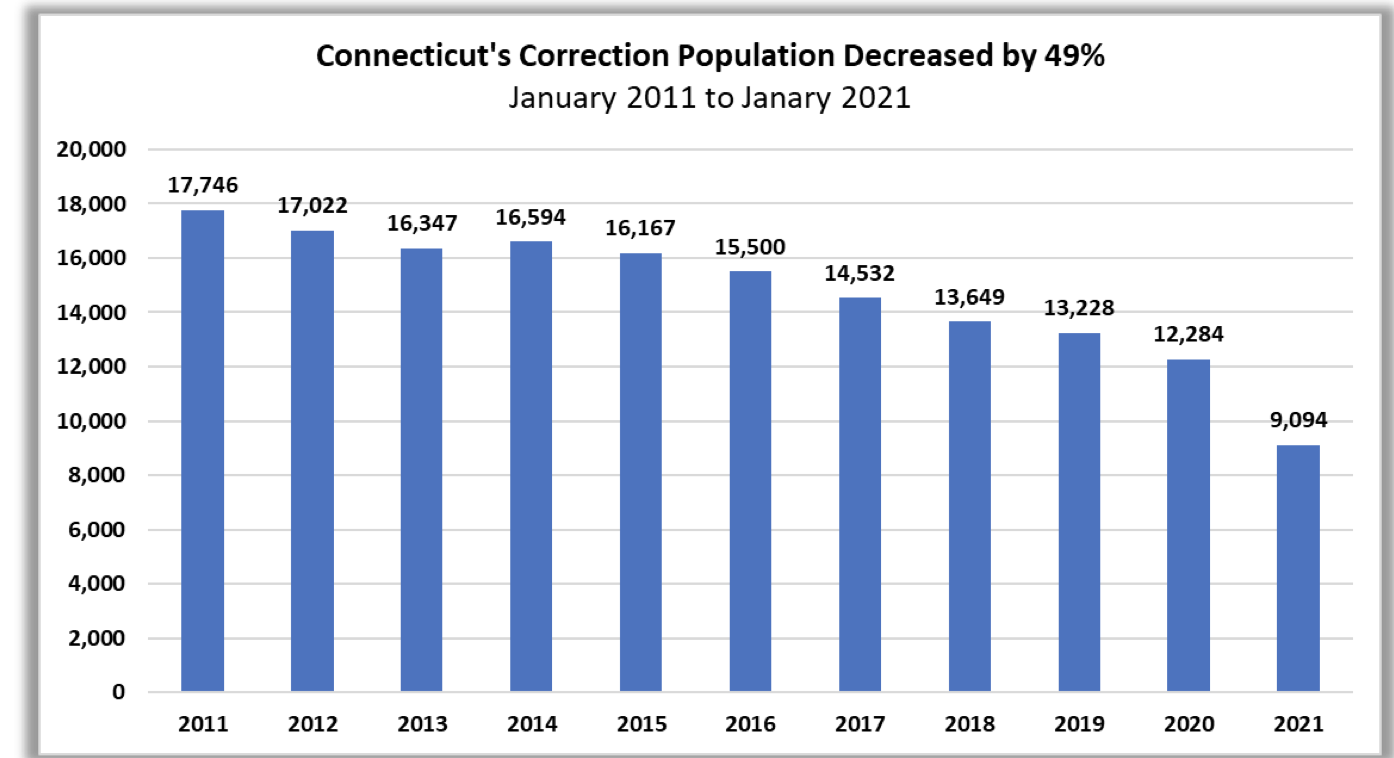 The number of people in correctional facilities has plummeted over the past decade.

Gov. Ned Lamont proposed ‘right-sizing’ Connecticut’s correctional system Wednesday, saying the state will close three facilities due to a decade-long decline in the prison population that has become even more precipitous since the beginning of the pandemic.

The state’s incarcerated population has decreased by 49% between January 2011 to January 2021. Closing prisons and their housing units would save money by reducing staff overtime costs and focusing resources on a smaller number of correctional facilities. The Department of Correction currently operates 14 prisons and jails that hold 9,047 people, an occupancy rate of 54%, said the governor’s budget director, Melissa McCaw.

McCaw said the state plans to close three correctional facilities in the coming months. Officials announced the first, Northern Correctional Institution, this week, but have not named the other two.

“This is an opportunity for us to look at how we’re providing services, and to consolidate, where appropriate,” said McCaw.

The governor’s budget includes savings of $20 million in FY 2022 and $46.9 million in FY2023, funds saved from correctional facility closures and other budget maneuvers.

Advocates, mindful of racial disparities in the prison population despite the overall drop in the number of people behind bars, are already eyeing the savings from closing correctional facilities. Last month, they demanded officials shutter Northern and divert the savings to address root causes of crime and aid under-resourced communities by providing funding for housing, clearing criminal records and expanding medical and mental health resources.

Those supports should be allocated to help communities of color most affected by punitive justice policies, advocates say.

“We want to see demolition and reparations,” Terri Ricks, a Smart Justice leader with the ACLU of Connecticut, said during a rally outside the Capitol Wednesday morning.

Also included in Lamont’s plans is funding for the Inspector General position established in the police accountability bill passed over the summer. The $1,168,000 Lamont proposed for nine positions would create an office to independently investigate deaths in police and corrections custody.

The governor’s proposal would also establish a Conviction Integrity Unit, informed by best practices developed by 79 similar agencies across the country, to investigate claims of wrongful conviction faster than the existing legal process. The three positions would cost $363,382.

Lamont also suggested $195,000 be allocated for three positions to continue the progress made with the Division of Criminal Justice’s electronic case management system, to comply with the governor’s 2019 prosecutorial transparency bill.

In an effort to reduce the cost of phone calls for incarcerated people and their families — the highest in the nation — Lamont recommended budgeting $1 million to offset a loss in revenue that supports the salaries of positions within the Judicial Department funded through prison payphone rates.  The state will also renegotiate its rates to reduce the cost — and commission the private company, Securus Technologies, collects and passes through to the state — from pay phones in correctional facilities.

There are dueling bills in the legislature right now that would give incarcerated people access to free calls. The lawmakers behind both bills — Rep. Josh Elliott D-Hamden, and Senate President Pro Tem Martin M. Looney, D-New Haven — joined a virtual press conference on the subject at the same time Lamont gave his budget  address Wednesday.

[For people with relatives in prison, coronavirus makes calls more urgent and hard to afford]

Looney acknowledged the cost of keeping in touch with an incarcerated loved one — it can cost $25 for seven 15-minute phone calls — has been difficult as many families have lost work during the pandemic.

Elliott, who has championed the issue for several years, said officials should recognize that keeping incarcerated people in touch with their loved ones is a form of rehabilitation, and that the financial burden of the phone calls disproportionately falls on communities of color, which are over represented in the incarcerated population.

“Connecticut has committed to being a leader in the field of justice reform as we continue to work to ensure that families can stay in touch, even if a member is incarcerated,” Elliott said. “Our state will make it clear to unscrupulous corporations that they will no longer use the government to siphon money from disadvantaged communities.”