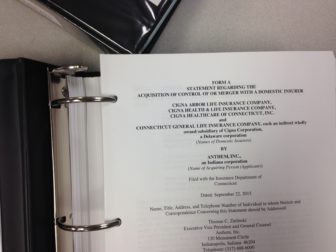 Saying that “all eyes will be on Connecticut,” critics of two pending mergers of major health insurers have asked the state’s insurance commissioner to take steps they say would increase transparency in the review of Anthem’s proposed acquisition of Cigna.

The Universal Health Care Foundation of Connecticut, Connecticut State Medical Society and Connecticut Citizen Action Group oppose the proposed deal, and leaders said Wednesday they were concerned that a public hearing on the matter might not adequately allow for all views to come out. In a letter to Insurance Commissioner Katharine L. Wade, they asked for three things:

Zorn said Connecticut’s review of the Anthem-Cigna deal will probably draw national attention because Cigna is headquartered in Bloomfield, and because Wade is leading the National Association of Insurance Commissioners’ working group on the proposal.

What does the Anthem-Cigna deal mean for consumers?

Hartford-based Aetna is also seeking to acquire Humana, but the state insurance department will play a more limited role because Humana does not participate in Connecticut’s insurance market.

The insurance department will hold a public hearing once Anthem’s application to acquire Cigna is deemed complete, which is expected to be several months away, department spokeswoman Donna Tommelleo said. She noted that the application, known as a “Form A,” is available on the department’s website.

Tommelleo said the department is reviewing the proposal in accordance with applicable laws, and said the public “will be given ample opportunity to provide both written and oral comment.”

“The Department respects the coalition’s interest in the matter,” Tommelleo added, referring to the organization formed by the three groups that wrote to Wade, called the Connecticut Campaign for Consumer Choice.

Insurance company officials have touted the deals as ways to improve health care delivery and improve care quality and choice for consumers, and have disputed concerns about the impact of the acquisitions on insurance markets.

“Expanding access to affordable health coverage is the foundation of our combination with Cigna and will remain Anthem’s top priority. Anthem and Cigna have limited overlap in a highly competitive industry, and together will be in a better position to improve consumer choice and quality,” said Sarah Yeager, a spokeswoman for Anthem. “We will be better able to manage the cost drivers that negatively impact affordability for consumers. We are continuing to work with the Department of Justice and appropriate State regulators, and are confident that our proposed merger is being reviewed based on these facts.”

Cigna released a statement that echoed those points.

“Evidence shows that when mergers happen, premiums go up and quality certainly doesn’t improve,” Zorn said. “Any savings that large companies achieve are not passed along to consumers but are pocketed by the insurance companies.”

Matthew Katz, executive vice president and CEO of the state medical society, said the increased market power that could come from Anthem’s acquiring Cigna could “be the demise” of struggling private physician practices in the state, leading to less choice for consumers.

And Tom Swan, executive director of Connecticut Citizen Action Group, said the state’s insurance department had not done an adequate job reviewing past mergers. He also questioned Aetna’s public commitment to Louisville – where Humana is based – when the company has not made a similar commitment to Hartford.

The proposed mergers have also come under fire from the American Hospital Association and the American Medical Association, which has listed Connecticut among the states that would see a substantial decrease in market competition from an Anthem-Cigna merger.

According to insurance department figures, Anthem Blue Cross and Blue Shield and Cigna together covered 64 percent of private insurance customers in Connecticut in 2014 – 1.59 million people. Anthem covered 44 percent of the market, while Cigna covered nearly 20 percent.

Anthem officials have characterized the companies as complementary, saying there would be little market overlap. In Connecticut, Anthem is a leader in the individual and small-group insurance markets, while Cigna has a minimal role in the individual market – it had 317 policies in effect last year – and does not offer plans in the small-group market.

The Universal Health Care Foundation – which was formed with money from the state’s former Blue Cross and Blue Shield insurer when it was acquired by Anthem and became for-profit – has raised concerns in the past that public hearings held on insurance rate proposals, which have been held on weekdays at the insurance department’s downtown Hartford headquarters, were not adequately accessible to the public. The department accepts written comments from the public through its website, and dozens of people submitted their thoughts before the rate hearings last year, although few showed up to testify at the hearings.