Student suspensions can add to a downward spiral, data suggest

Students need to be at school to learn, but new state data show that many children expelled or suspended because they act out are among those likely to miss the most school and perform less well academically.

“Students receiving disciplinary sanctions are experiencing substantial attendance and performance issues,” reads a presentation prepared for the State Board of Education’s Wednesday meeting. “Suspensions and expulsions may exacerbate academic deterioration. Receipt of even one suspension is associated with higher likelihood of academic failure, school dropout, and involvement in the juvenile justice system.”

Many educators also say students are more likely to act out in class when they feel they are falling behind.

Of the 20,063 students sent home from school for getting into trouble last school year, nearly half were classified as “chronically absent,” meaning they missed at least 10 percent of the school year, or more than 18 days.

The vast majority of the disciplinary actions were out-of-school suspensions, and many students were suspended more than once. The average length of a suspenion was three days. And just over 1,700 of all children sent home were under age 7.

Black and Hispanic youths account for the large majority of suspensions and expulsions with discipline rates triple that of their white peers, and districts with high poverty and low student performance have the highest number of students being expelled or suspended, the state data show. (See district-by-district rates below)

The State Department of Education concludes that suspension and expulsions are contributing to poor educational outcomes.

“Within each grade band, the students receiving at least one ‘discipline’ scored approximately 20 index points lower than their ‘no discipline’ peers,” based on student testing data, the report to be presented Wednesday concludes. “When students are provided with no educational alternative, student alienation, delinquency, reoccurrence, crime, and substance abuse may ensue. Social, emotional, and mental health support for students can decrease the need for referrals, suspension and expulsion.”

The report comes as the State Department of Education faces two lawsuits; one alleging that students are provided with either no education or a subpar alternative when they are expelled, and another claiming that the state does not provide school districts with enough funding to properly provide services to children who have experienced trauma.

“We didn’t have anyone to help him,” Jacqueline Simmons, a principal at a Bridgeport elementary school testified during the school-funding trial in January, referring to a 10-year-old student in crisis who was carried out of the school and into an ambulance.

Simmons’ school had a social worker available two days a week and a psychologist one day. So when the 10-yer-old started acting out on a day when no mental health staff were around, Simmons and her teacher did their best to diffuse the volatile situation.

It’s also a problem in New Britain, a teacher testified.

“It’s impossible to meet the needs of all the students when their needs are so vast,” Barbara Masuluk, an American government teacher at New Britain High School, testified in February.

Parents and educators from charter schools routinely come to state education board meetings to share their experiences.

“Today, I would just like to speak with you about a number of concerns that my child, I, and a number other families are currently experiencing at Achievement First. Currently, my child is disinvested in his education. He is failing five classes, is in detention 11 times a week and he spends 8 to 10 percent of his time outside of the classroom,” a tearful Talitha Coggins, whose son is in eighth grade at Achievement First in Hartford, told the board last November. “There’s no social lunch. There’s no social breakfast. He was recently identified as a child with behavioral concerns. These concerns have been exacerbated in this school environment… As a result, this has been a direct correlation between his failing grades and his behavioral concerns.”

Facing suspension, she withdrew her son from the school. 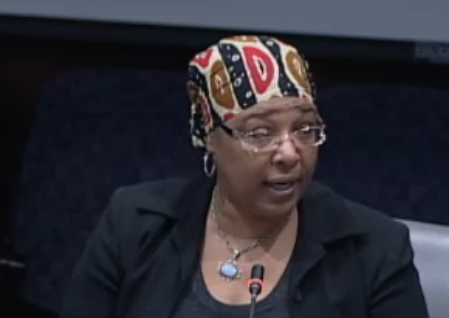 “If you investigate you will find that some of these examples are shared by the many families that make us a community,” Tanya Jackson tells the State Board of Education

Tonya R. Jackson, testified to the state board the next month about the concerns that were raised when she was a behavioral therapist at Achievement First in New Haven.

“We need your help as a State Board of Education. If you investigate you will find that some of these examples are shared by the many families that make us a community,” she said.

When the state first identified two years ago that many charter schools were suspending students at much higher rates, the State Board of Education required non-profit charter school operators to include plans to improve their discipline rates when their charters were up for renewal every five years.

Since then, the board has renewed several charter schools that have submitted improvement plans. While charter school suspension rates have declined slightly over the last couple of years, they remain among the highest in the state.

Child advocates also have been pleading with the State Department of Education and the legislature to mandate stricter requirements and oversight for the alternative education programs for expelled students.

Most of the nearly 1,000 students expelled each year are provided with either a tutor for a few hours a week or enrollment in an alternative program — which the the state does not oversee or set standards for.

State law requires local education officials to provide expelled students with an “alternative educational opportunity during the the period of expulsion,” but it is silent on what the quality of that education must be. Students over 15 are not guaranteed an alternative education if they have been expelled previously.

The education department has provided no guidance to school districts, and the General Assembly has declined for years to pass proposed legislation that would clarify standards for expelled students. 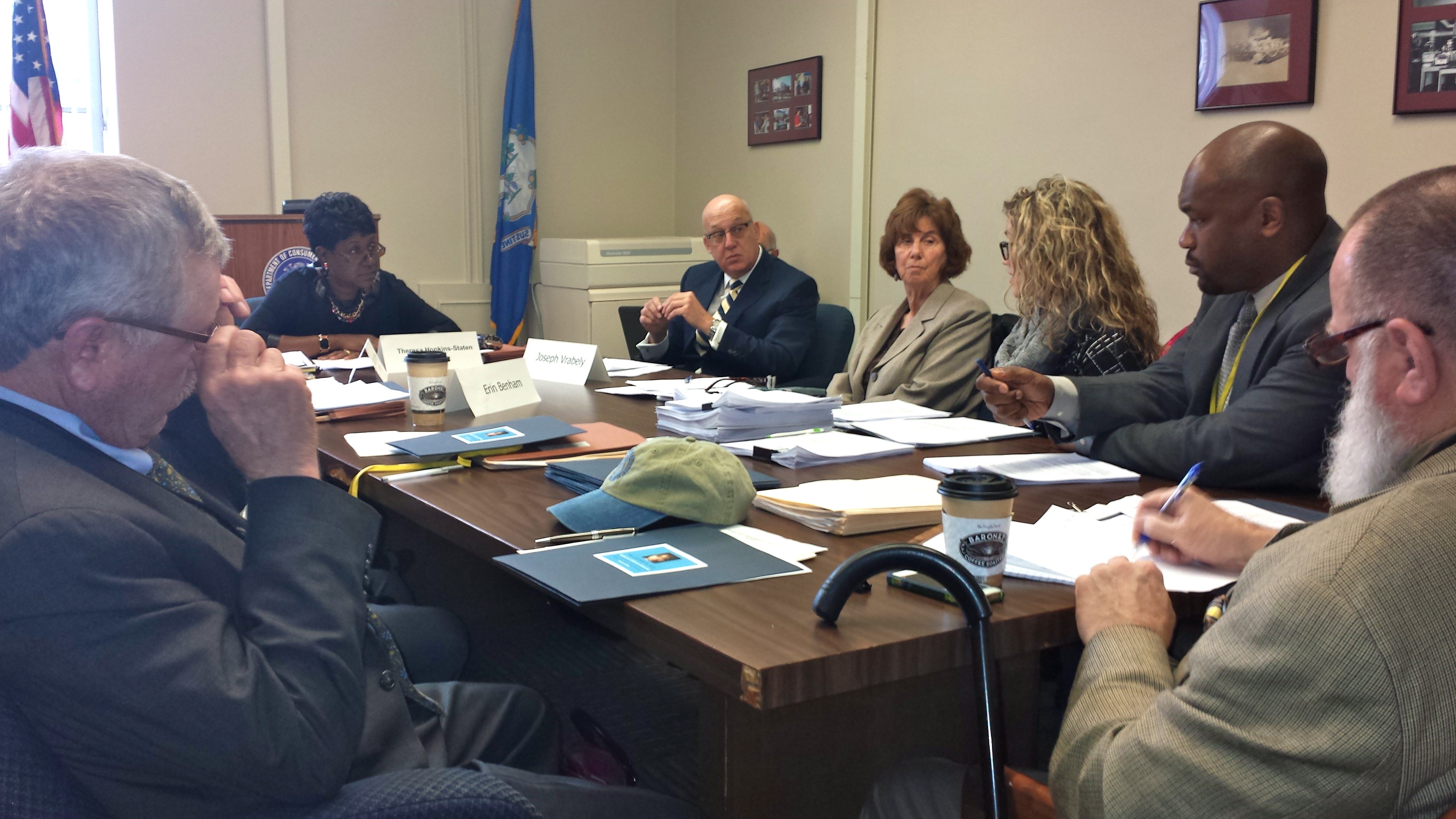 Attorneys from the Center for Children\’s Advocacy lobby a committee of the State Board of Education to set standards for the education expelled students receive.

Last month, attorneys from the Center for Children’s Advocacy, which is suing the state, pleaded with the State Board of Education’s committee that oversees legislation and policy to take up this issue.

They recommended requiring a structured program for all expelled students of at least five hours per day, giving families five days notice before an expulsion hearing, notifying parents they have a right to a hearing to appeal an expulsion, removing adult education as an option for expelled students, and requiring individual plans to coordinate students’ transition back to school.

“A lot of parents face roadblocks when they seek counsel. They would likely get better results with a hearing versus settling,” explained Kathryn Meyer, an attorney at the Hartford-based advocacy group. “Adult education is a horrible placement for high school students.”

Martha Stone, the executive director of the Center for Children’s Advocacy, told the committee that she feels she has been left with no option but to file a lawsuit since the issue has not improved for years.

“Time is of the essence,” she said. “These are the most vulnerable kids and no one speaks up for them. If we are really talking about closing the achievement gap, this is the bottom of the bottom. We have to pay attention to this bottom group of students.”

Sanctions for children under age 7 during the 2014-15 school year
Last school year 1,706 children under age 7 were given out-of-school suspensions and 897 in-school suspensions. None were expelled. Districts marked with an “*” had less than 5 students expelled. Districts not identified had no students suspended or expelled
Connecticut State Department of Education