Number of youths jailed before trial to drop drastically

The number of juveniles incarcerated while they await trial is expected to be cut in half starting Jan. 1, when legislation the governor is expected to sign will significantly limit the reasons a child can be locked up.

Currently, youths accused of breaking laws not serious enough to land them in the adult justice system can be held in detention facilities in Bridgeport or Hartford if they violate probation, have a history of running away from home or are awaiting services, such as a spot in a substance-abuse treatment program.

The new legislation passed unanimously by the General Assembly would only allow courts to lock up youths before trial if they pose a risk to public safety, have committed a new offense or need to be held for charges in another state.

“We believe that this is probably… going to drastically reduce the detention population, and very quickly,” Judge Bernadette Conway, the chief administrative judge for juvenile matters, told the state panel that oversees juvenile justice on Thursday.

“We’ve looked at this. Putting kids in detention to teach them a lesson or to punish them does not modify behavior in a positive way,” she said. “It doesn’t stop the negative behavior…You have to ask what’s the point?”

A second chance for CT youths who break the law?

Last year, 1,782 youths were incarcerated while awaiting trial. Three-quarters of them were black or Hispanic and their average stay was 18 days.

If the upcoming changes had been in place last year, 900 fewer children would have been held in detention, William Carbone, the former executive director of the Judicial Branch’s Court Support Services Division, told the oversight panel – the Juvenile Justice Policy and Oversight Committee. Carbone now provides research support to the committee.

Prosecutors are not pleased with the coming change.

“What can we anticipate the court’s response is going to be when a judge releases a child on a suspended order of detention with conditions like curfew, staying alcohol and drug free, go to school, don’t associate with gang members, and a kid violates any or all of those conditions,” said Francis J. Carino, who oversees juvenile matters in the Office of the Chief State’s Attorney. “The court order has no affect [now]. From the kid’s point of view, any orders like that the judge imposes that has conditions of release are unenforceable and meaningless because there will be no consequences…

“If I am a 16-year-old kid out on a suspended order of detention and a 6 o’clock curfew, and I blow that off, you think I am really concerned that now you are going to put me on house arrest. What difference is that going to make?” Carino asked.

But advocates and the judge responded that children would still face repercussions, they just wouldn’t be held in pre-trial detention. Instead, they would be placed in programs offered by the Judicial Branch in the community or be committed to the Department of Children and Families.

Programs could include substance-abuse treatment, anger management strategies or other therapies.

“Detention isn’t how we are going to make kids better,” said Abby Anderson, the executive director of the Connecticut Juvenile Justice Alliance.

“It’s not detention or nothing,” said Carbone. 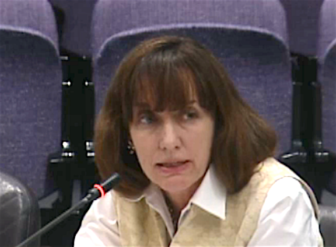 “We are going to try a new method of parenting,” said Rep. Toni Walker, D-New Haven, co-chair of the juvenile justice advisory panel.

Other changes are also expected to decrease the number of incarcerated youths, including cutting in half the time between appearances before a judge for juvenile pretrial detainees – from 15 days to 7. The deputy director of a detention facility also would be allowed to release a youth under certain circumstances.

The number of youth who end up in court in the first place is also expected to drop. That’s because schools will no longer be able to refer students to court for truancy or violations of school rules. Last year, schools made three-quarters of the 14,019 referrals to court, Carbone said. Some 3,133 of the school referrals were for truancy or violation of school rules.

Advocates have long complained that the state’s juvenile justice system was serving as a default for children who needed mental health services or other programs. This legislation seeks to divert children from the courts to schools and communities.

However, funding for community-based programs was cut in the recently adopted state budget to close the state’s budget deficit. 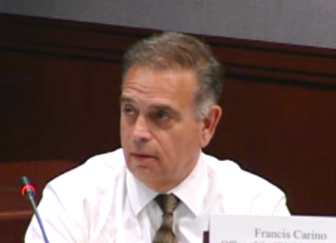 While the reduction of inmates is expected to result in significant savings, Walker – who also is co-chair of the legislature’s powerful budget writing committee – said it remains to be seen whether that savings will be reinvested in community programs since the state is facing deficits for at least the next two years.

“The big question and elephant in the room is how do we do this with the cuts,” she told the panel. “We redirect the dollars.”

Only time will tell if that happens.

“This is a big, big change, and hopefully it’s a positive change, and hopefully the children of Connecticut will benefit from the changes.” Conway said. “We’ll see in a year from now whether we are still sitting here clapping each other on the back. I am optimistic that we are going in the right way.”

The number of youths incarcerated at the state’s pretrial detention centers has remained steady over the last several years, even as state law has changed so that 16- and 17-year-olds who commit less serious crimes are handled by juvenile courts instead of the adult criminal justice system. At the Connecticut Juvenile Training School, which houses youths convicted of offenses not serious enough to land them in the adult system, the number of youths has dropped from 160 two years ago to 42 on Thursday.

The governor is also pushing the General Assembly to approve legislation that would drastically reduce the number of adults incarcerated before trial by no longer requiring bail for most nonviolent misdemeanors.