The state will not be allowed to fill empty seats in the Hartford region’s desegregated magnet schools with more black and Hispanic students from Hartford – at least for the next school year.

“The empty seats cannot simply be filled without recognizing the mandates of the court,” Berger ruled.

“Our Supreme Court noted that the children of different races and economic and social groups have no opportunity to know each other, to live together in school,” Berger said. “They cannot be expected to gain the understanding and mutual respect necessary for the cohesion of our society.”

Berger delivered his ruling in a four-minute oral decision after hearing hours of testimony throughout the week.

In response to the Supreme Court’s Sheff desegregation order, the state opened a network of themed magnet schools designed to lure white, middle-class children from surrounding suburbs to voluntarily enroll in schools with city youth.

This school year 2,157 Hartford residents – 10 percent – are bused to nearby suburban schools. Another 7,314 Hartford black and Hispanic school-aged students – 34 percent of city students – attend integrated magnet schools with thousands of suburban students. At least one in four students are white or Asian.

Under the rules worked out for implementing the Sheff decision, 75 percent minority enrollment has been the upper limit allowed for a school to be deemed desegregated. The state had planned to raise the limit to 80 percent, and the Sheff plaintiffs sought an injunction to stop the state and use the 75 percent limit in the upcoming regional school lottery. Judge Berger granted the injunction.

But the ratio is not the only thing preventing some of the 42 magnet schools from accepting more black or Hispanic Hartford students. That’s because the state also has set caps on how many student seats it will pay for.

The schools currently enroll 18,243 students – even though they have the capacity to enroll 19,682 students. That means the schools are only operating at 93 percent of capacity, and that there are 1,439 empty seats throughout the network.

Some schools have dozens of empty seats while others have none.

The abundance of empty seats in high-performing magnet schools has frustrated some Hartford parents whose children have failed to win seats in the school choice lottery year after year.

More than half of Hartford’s students remain in struggling segregated schools, something the attorney representing the City of Hartford urged the judge to keep in mind as he made his decision about filling the available magnet school seats.

60 years after Brown vs. Board of Education: Still separate in ConnecticutSchool desegregation: Will focus shift from magnets to suburbs?State pushes to end court oversight of Hartford school desegregationLeaders struggle with next steps in desegregating schools

“What I am certain of is that this fall there will be over 9,000 Hartford children going to schools in completely segregated settings. And I hope that as we go forward in this, we bear that in mind,” said Howard Rifkin, the chief attorney for Hartford.

The Malloy administration’s proposal to move to the 80 percent-minority standard for an integrated school would mean an additional 297 Hartford children could enroll next year in a magnet school that would be considered integrated.

It may seem like a small shift, but attorneys representing the group of Hartford parents that brought the Sheff suit called it a “procedural limbo” that put the whole network of desegregated schools in danger of going down a path that would deter white students from enrolling.

“We didn’t get an assurance that there would never be a time when a 90-10 class would be accepted into a school,” Dennis Parker, one of the attorneys representing the Hartford parents, said in his closing arguments Friday. “There is a harm to kids being in school that are not integrated… It struck me listening over the last two days how there seems to be an acceptance of segregation in the schools.”

“A school benefits when a parent walks into the building and they don’t see a majority of one group or another. They feel like all children are equally represented,” said Sullivan. “It is a slippery slope that happens very quickly in schools when students apply and students come to orientations. If they do not see a school that is representative of an integrated setting, then they will not apply… We believe that 80-20 ratio would create schools that are less appealing to parents who have affluence. It’s likely to be followed by concentrated poverty.”

Of the 80-20 proposal, Rifkin told the judge that the city is “comfortable with moving toward that standard for noncompliant schools.”

Dennis Parker of the American Civil Liberties Union, an attorney for the plaintiffs, questions a witness.

“That is more generous than what I have seen in other places,” she said. “There is still a relatively low number of students of color in the surrounding Hartford area.”

Attorneys representing the state say they are out of options to fill the empty seats other than by changing the ratio.

They point to the increasing number of school-aged minority children in the municipalities surrounding Hartford – 24 percent black or Hispanic this school year –  and that half of the suburban applicants seeking a seat in a magnet school next year are black or Hispanic.

“The numbers don’t lie,” said Ralph Urban, an associate attorney general representing the governor. “Hartford-resident black and Hispanic students are locked out of these schools. … The schools are forced to suppress enrollment to comply with an artificial ratio.”

Ralph Urban, the lead attorney representing the state, during closing arguments. Elizabeth Horton Sheff, whose son was the lead plaintiff in the case, watches in the background.

He dismissed concerns that the state is retreating from desegregating schools.

“It’s Chicken Little that the sky is falling. The sky is not falling,” he said. “The state understands its constitutional obligation, and it will carry it out.”

Results of the school choice lottery entered into evidence during the hearing showed the racial makeup of the first 10 students on the waiting list for each school, including ones that were nowhere near being at capacity.

Of 13 schools that were projected to fall short of the 75-25 compliance ratio, 11 would be made more segregated by enrolling the next 10 students on the wait list. But that wasn’t the case at five other magnet schools that were in compliance and had the capacity to enroll more students. At those school, at least eight of the next 10 applicants were white or Asian. The issue at those schools is that each year the state puts caps on how many students they will pay for.

For the current school year, of the 25 schools that were considered integrated and not close to being out of compliance, 15 had seats left unfilled and were at or above the financial cap. State funding is the main revenue source for magnet schools.

The way the school-choice lottery is set up, half of the available seats go to Hartford residents and half to suburban residents.

In order to draw more white students in the suburban lottery, the state gives a higher weight to students coming from communities that have higher proportions of white residents.

This roundabout way of giving white students a greater chance of winning a seat is necessary because the U.S. Supreme Court has ruled that it is unconstitutional to simply assign students to a school based on their race.

The plaintiffs raised the option of giving greater weight to students from households with higher median incomes. CREC’s Sullivan said that was tried with one of its schools, and 18 additional students were able to enroll in the school, 12 of whom were from Hartford – a 6 percent increase in city students in that school. 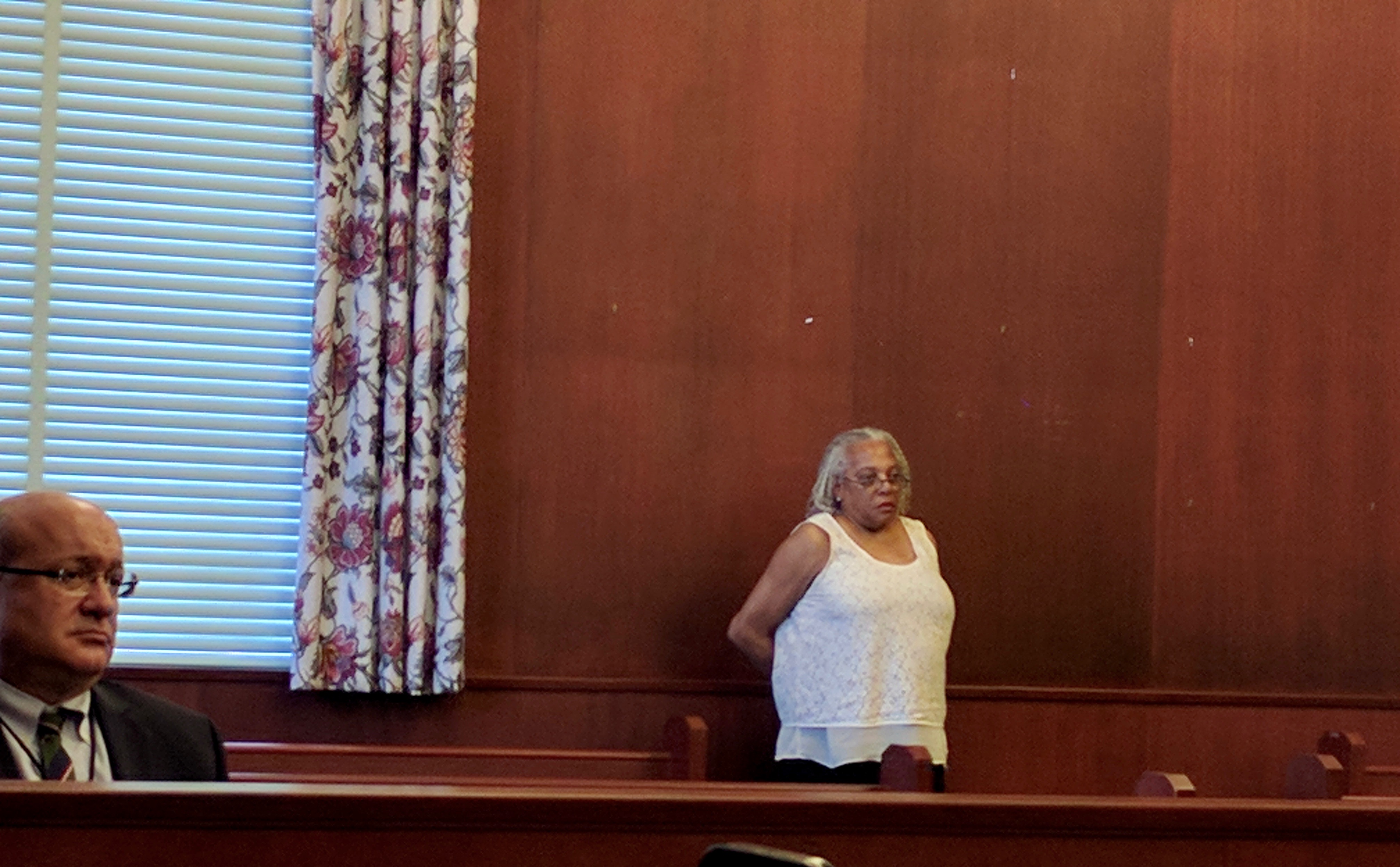 Elizabeth Horton Sheff watches from the back of the courtroom. Glen Peterson, who runs the state’s school-choice office, waits to testify

But the state’s chief witness, Glen Peterson, who runs the state education department’s school choice office, said it commissioned a study in 2013 that showed such an approach would have a minimal impact on how many white students enrolled.

“It wouldn’t have helped us,” he testified.

Attorneys representing the Hartford parents said the there are other options as well, including weighting whether a child’s parents went to college or increasing the marketing of the magnet schools to suburban communities.

And then there is the expensive option – more state spending to increase the number of seats overall, a scenario the state is unlikely to agree to in the absence of a court order, given the sizable budget deficit facing the state.

“We are at a particularly important crossroads right now,” said Martha Stone, one of the attorneys for the plaintiffs from the Center for Children’s Advocacy. “There is no long range plan for what is going to happen in the future.”

But Urban, the attorney for the state, argued that adopting the 80-percent standard for a desegregated school is the more appropriate path, calling it a “rational, limited and reasonable change.”

“We cannot close our eyes to the changing realities in our midst,” he said.