It was a bad week for the “Alt-Left,” which hardly seemed to exist before last Tuesday when it was called out by the president of the United States.

It was the worst — horrific, in fact — for the protesters run down by a white supremacist in Charlottesville, Va., but went progressively downhill for President Donald Trump himself. The president took an unprecedented wave of criticism for what Connecticut Sen. Richard Blumenthal called his “disgusting, indefensible comments” in response to the Charlottesville violence instigated by thousands of white supremacists rallying there. 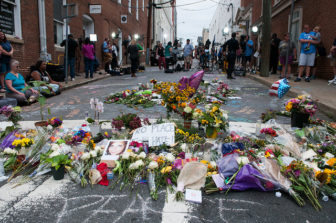 Downtown Charlottesville memorial to Heather Heyer, slain when a white supremecist drove his car into a crowd of protesters. (Photo by Bob Mical | Creative Commons)

The president’s morality and sensibility came under fire even from many fellow Republicans around the country and from Connecticut. (Not that the state is immune from hate and bigotry.) Gov. Dannel P. Malloy, a Democrat, didn’t think local Republicans were explicit enough in their condemnation of the president.

In another rebuke, some of America’s most prominent and powerful corporate executives — including United Technologies CEO Gregory Hayes and Aetna CEO Mark Bertolini — denounced Trump’s posture and resigned from his advisory councils.

And Friday, perhaps because of his alignment with the Alt-Right or his public undermining of the president’s North Korea policy, it was the abrupt departure of Trump’s chief strategist Stephen Bannon who became the latest embarrassment for the administration.

Charlottesville wasn’t the only subject causing problems for Republicans, either. Trump’s retweet of a cartoon of a train running over a CNN reporter drew a rebuke, as did a Manchester man’s post positing that the white supremecists creating havoc in Charlottesville were actors hired by the political left. 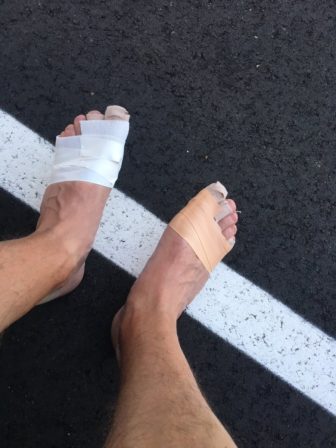 There are other issues on the minds of Connecticut residents, of course, and U.S. Sen. Chris Murphy heard about plenty of them on his second annual hike across the state.

Immigration continues to be an issue, including the Deferred Action for Childhood Arrivals (DACA) program set up by former President Barack Obama. Connecticut “Dreamers” joined a rally in Washington last week hoping to persuade Trump to save the program from a legal challenge posed by a handful of state attorneys general.

A proposed high-speed rail line through Fairfield County is also causing concern among residents there, exacerbated by the failure to make public a specific route for the expanded service.

Education is also of huge concern at a time when the state has been unable to pass a budget. And Friday the governor warned that without one he plans a draconian 28 percent reduction of local funding. Nevertheless, state officials say they will continue to provide about $3.3 million to pay for preschool programs at 24 school districts.

All the concern over racism and hatred distracted the state momentarily from its fiscal woes, but later in the week they re-emerged when the head of the association representing more than 100 small Connecticut towns warned that some communities would face cash shortages and supplemental tax bills if the budget standoff continues into October.

Two state agencies began looking into the question of whether cheap natural gas is hurting profits for the Millstone nuclear power station, but the station’s owner, Dominion Energy, remained noncommittal on whether it would turn over its financial records.

Meanwhile, as the state’s job numbers dipped very slightly, Senate President Pro Tem Martin M. Looney said state senators were becoming more accepting of the idea that a state sales tax increase is an “inevitablility,” though three moderate Democrats in the evenly divided chamber warned there still was no consensus on the issue.