Riccio, 52, had driven to Hartford from his home in Suffield Monday to protest cuts to the state Medicare Savings Program that uses Medicaid money to help pay medical expenses that his Medicare doesn’t cover, such as premiums, deductibles and co-pays.

The program’s income eligibility limits were lowered with passage of the $41.3 billion state budget in October. The new limits were supposed to go into effect on Jan. 1, but the Department of Social Services (DSS) said Wednesday it will slow down implementation of the changes in response to concerns raised by the enrollees, advocates and legislators.

DSS officials said they will be reviewing coverage alternatives for current enrollees and the review will take at least two months, at which time the reduced limits will go into effect.

Riccio has multiple sclerosis and is among 171,500 low-income seniors and residents with disabilities enrolled in the Medicare Savings Programs. Roughly 86,000 will no longer be eligible for the program and about 27,000 will move from one level of the program to another, meaning they will receive less financial help.

Administration officials said they still are developing projections for total enrollees affected, and warned Tuesday that forecast could grow. Riccio, along with all those likely to be affected, received a letter last month from DSS informing them of changes.

Since then, state legislators have been inundated with calls about the rollback. They met Wednesday with Gov. Dannel P. Malloy behind closed doors to discuss it.

When asked afterward if lawmakers can wait to make a potential fix until the February session because of the DSS announcement, House Speaker Joe Aresimowicz, D-Berlin, said, “I think the new reality in this building is that there’s going to be constant conversations and sharing of ideas on budgetary matters throughout. There’s no more off-season.

“The Medicare Savings Program, we’re heard from every single leader of every caucus and our members in the public at large that we need to fix it,” said  Aresimowicz. “So the announcement is helpful, but we’re still sharing ideas and having discussions about how we can permanently solve the issue.”

To postpone or restore the cuts to the Medicare Savings Program, legislators would have to find money in a budget already projected to be running a $207.8 million deficit this year.

For others, the program only covers the cost of their premiums. There are two income eligibility limits for this benefit, depending on whether the enrollee is covered by other Medicaid programs. 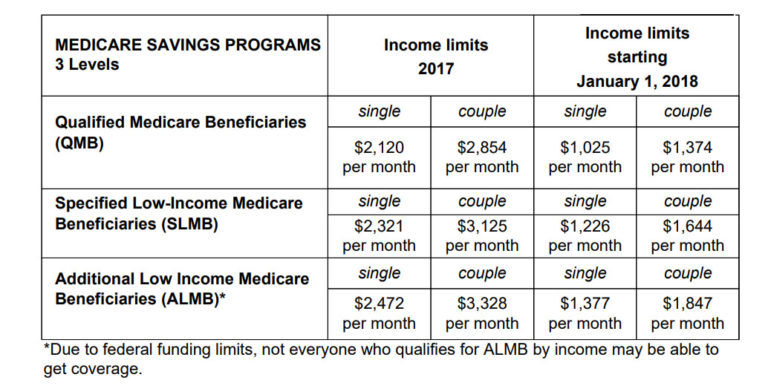 The current and upcoming eligibility limits for the Medicare Savings Programs as explained to participants in a letter from DSS.

Riccio, who used to be a carpenter, was diagnosed with MS about eight years ago, and began collecting disability benefits about three years later.

His monthly income of about $2,090 made him eligible this year for the most generous Medicare Savings Program benefit — the one that covers his premium, which is about $140, as well as his out-of-pocket costs.

He’s been eligible for the program on and off since he started receiving disability benefits.

“It was one less thing I had to worry about,” he said Monday.

Riccio said he’s trying to see as many doctors as possible this month while he still has coverage. He has an infusion treatment scheduled for March he said he’s worried about, since he doesn’t know how it will be covered.

He said he plans to meet with a social worker this week to discuss purchasing a Medigap policy — private health insurance that helps pay for some costs not covered by Medicare.

“I understand this is real money [legislators are] talking about, but you’re hurting the most vulnerable people,” he said. “If I could still walk, I would give a little more of my paycheck to help someone like me, someone like my friends, who are in power scooters all day.”

For 27-year-old Jonathan Miller, who has cystic fibrosis, losing his Medicare Savings Program coverage means he’s had to consider returning to work sooner than he and his doctors would like because it might make him eligible for another Medicaid program.

“I have to choose between risking my health, possibly my life, or else burden my family with what will likely add up to more than a $100,000 health bill over the years,” Miller said. “It’s a miserable feeling … Week-to-week, month-to-month, I do have situations that are life-threatening. To add one more thing to focus on that isn’t my health is a threat.”

Cystic fibrosis is an incurable, genetic disease that causes persistent lung infections and limits the ability to breathe over time.

Miller, a resident of Meriden, worked for many years, but had to stop in November 2014 as his health deteriorated. He was approved for disability benefits and became eligible for the Medicare Savings Program this year. He started receiving benefits in June.

His monthly income is about $1,815, which includes his Social Security disability benefits and money he gets from a long-term disability plan from a previous employer.

Without the Medicare Savings Program, he predicted his health care costs could amount to half of his income or more each month because he would have to purchase additional health care coverage.

“What they are doing is awful. I hope they can review it and restore it to as many people as they can,” he said.