Reality in politics is what you say it is

It was a week of “presidential reality” in Washington – where President Donald Trump’s father was born in Germany (Really, New York), where closing the southern border was imminent, (in a year, maybe), where the noise of wind turbines can cause cancer (It can’t), and where he welcomes release of the Mueller report on Russia’s effort to interfere in the 2016 election (It is a waste of time.)

And, of course, there’s Joe Biden, who is not running for president, (he is) apologizing if his behavior  offended some of the women he touched inappropriately in the past. 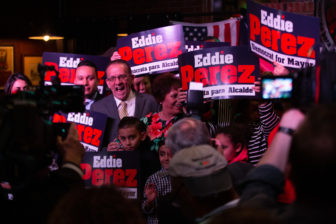 Reality was challenged no less in Connecticut, where former Hartford Mayor Eddie Perez, convicted of corruption in office nearly a decade ago, asked his fellow citizens to forgive him and return him to public office.

If the truth can be elusive, it was not for one state legislative committee’s trying. It approved dozens of bills intended to tighten the rules on political advertising and requiring presidential and gubernatorial candidates to disclose their tax returns to get on the ballot. (Trump didn’t.)

Factual accuracy was not the chief concern of opponents to U.S. Rep. Jahana Hayes and her endorsement of the Green New Deal when they claimed that the non-binding resolution would cost the nation $93 trillion.

Sometimes, though, numbers can be true – as when the Board of Regents for Higher Education says it may have to impose a 2.1 percent increase in tuition at the state’s 12 community colleges.

More encouraging data would be the report from the American Road & Transportation Builders Association that the number of structurally deficient bridges in Connecticut has fallen from 376 to 308. (The number has fallen, not the bridges.)

Regrettably, the number of deaths caused by fentanyl has not fallen, and recently the deadly drug has been claiming as many African-Americans as it has whites.

Numbers are often at the heart of political issues, and even small ones can be significant – like six, the number of State Board of Education vacancies that are preventing it from having a quorum.  Usually, though, the significant numbers are the large ones – like the $30 million Small Town Economic Assistance Program that at least one state senator fears is at risk from Gov. Ned Lamont’s “debt diet.”

Here’s another large and more positive number: $100 million for the state’s public schools, money donated by hedge fund billionaire Ray Dalio’s philanthropic foundation. The private gift is to be matched with money raised from other philanthropies and state reserves, but the state’s use of public-private partnerships has been the source of some contentious exchanges between Republicans and Democrats.

Of course $100 million is only a fraction of the $10.2 billion the Pentagon  wants to build three Virginia-class submarines next fiscal year, instead of the traditional two-a-year . It is an additional expenditure that would benefit Groton-based shipbuilder Electric Boat.