Major fireworks, but none political, over July 4 weekend

Nothing like a long holiday weekend celebrating American independence — or an ice cream, barbecue or dip in the ocean — to take the edge off a week of otherwise standard divisive politics.

In the three days leading up to the holiday, there was still plenty of politicking, of course. Some Democrats started picking favorite candidates to challenge President Donald Trump 17 months from now. Gov. Ned Lamont, for example, endorsed former Vice President Joe Biden, and U.S. Rep. Jahana Hayes, D-5th District, threw her support to Sen. Kamala Harris as “the perfect antidote to our current president’s false narratives.”

And while pundits fretted about how Trump’s Independence Day military-oriented theme threatened to ruin the traditional bipartisan feel of the celebration and diminish the image of the world’s most powerful nation, by the time he was delivering his speech on the national mall, most lawmakers had gone home to their districts. 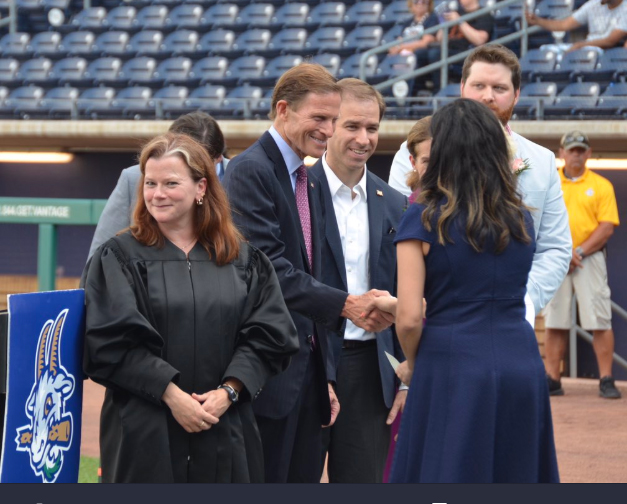 U.S. Sen. Chris Murphy, for instance, was finishing up his traditional walk across the state, talking to constituents about whatever issues concerned them. Fellow Democrat Richard Blumenthal spent the day helping swear in 60 new citizens in Hartford and, with U.S. Rep. Joe Courtney, D-2nd District,  marching in the Willimantic Boom Box Parade.

Trump had begun the week by becoming the first U.S. president to step into North Korea for a handshake with that country’s dictator Kim Jung Un – and a promise to resume negotiations on nuclear disarmament.

Back in Connecticut, U.S. Rep. John Larson, D-1st District, and other members of the House Ways and Means Committee became part of a suit seeking Trump’s tax returns.

Lt. Gov. Susan Bysiewicz and Secretary of the State Denise Merrill on Tuesday celebrated the Trump administration’s announcement that it would abandon its effort to include a citizenship question on the 2020 census. They were probably not pleased to learn later in the week that the president himself is trying to reverse course on that decision.

Opinion The TCI is not the right way to reduce emissions