A week of shooting, voting, and political theater

It was a municipal election week in Connecticut, punctuated by word of another mass shooting and a heated debate over taxes.

Monday, when news of the mass shooting in Sutherland, Texas, broke, Connecticut observers could not help but notice that the number of slain church-goers there was the same as the number of children and educators murdered years ago at Sandy Hook Elementary School.

The ever-rising body count and the continuing resistance to tightening gun laws came as no surprise to Gov. Dannel Malloy, who saw the deaths as a price Americans are willing to pay for unfettered access to guns. 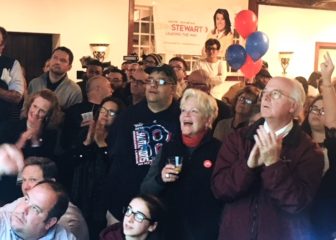 Meanwhile,  U.S. Sen. Chris Murphy, long a champion of gun-control legislation that has so far gone nowhere, announced he has a commitment from a Republican senator from Texas on a bill to fix a law that should have prevented the shooter from buying the guns he used in his attack.

Tuesday, however, the big question was whether the predominantly blue state’s voters would express their dissatisfaction with President Donald Trump and his policies by turning away local Republican candidates at the polls.

Democrats did make major advances in political control throughout the state, though Republicans disputed their claims that the victories were Trump-related. The vote results did not discourage State Sen. Art Linares, R-Westbrook, from exploring a run for statewide office.

With the state budget now in place and beginning to function as intended (perhaps with one or two exceptions), attention could be given to other matters of governance: recruiting more potential adoptive parents, for example; shutting down the Enfield Correctional Institution, and getting help to scores of northeastern Connecticut residents whose homes’ crumbling foundations are in need of costly repairs.

The state’s child advocate is concerned that  local schools have been putting “high numbers” of children on Homebound Instruction – perhaps in many cases in violation of state regulations. The state’s Care4Kids program — designed to help with child-care costs so parents can work — has at least begun enrolling children from its wait list.

Life after the budget’s passage has not been pleasant for CT-N, the state-owned, now budget-starved, public-affairs network, whose primary internet address no longer works.

Back in Washington, D.C., the Republican push to retool the nation’s income tax system is not going the way Connecticut’s all-Democrat delegation would like. The Senate version of the bill would eliminate the deductibility of property taxes.  U.S. Rep. John Larson, D-1st District, is on the House Ways and Means Committee and thinks there is a chance the GOP procedure will cause the bill to crash and burn as did the Obamacare repeal and replacement drive.

He calls the work of his committee “political theater.”

Elsewhere in the nation’s capital the fate of the proposed casino project in East Windsor seemed to have hit a big snag with the new Trump administration.

The state could benefit greatly, however, from a new defense spending package authorizing billions of dollars for aircraft, submarines and other weapons systems made in Connecticut as well as boosting military pay and the number of sailors, soldiers and marines. But the big increase for defense depends on congressional ability to reach a budget deal that would lift spending caps.