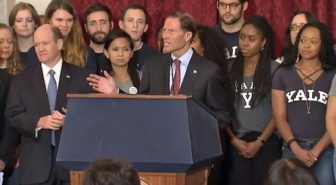 The students also registered their disagreement with Kavanaugh’s rulings on guns, immigration, abortion rights and other issues.

Kavanaugh was an undergraduate at Yale and graduated from its prestigious law school. His nomination to sit on the nation’s highest court has made the law school proud, but Kavanagh’s conservative beliefs have caused controversy among students and faculty.

However,  it was the allegations of sexual misconduct against the nominee – the latest from Deborah Ramirez, a Yale grad who said Kavanaugh exposed himself to her at a campus drinking party – that prompted the students to make an overnight bus trip to Washington D.C.

To Peterson, it’s personal. She said she was raped by a classmate when she was 19-years-old.

“Like Brett Kavanaugh, he came from a privileged background and I thought I would not be believed,” Peterson said.

The activism by Yale students in Washington D.C. on Monday was coupled with a “Day of Activism” at the school’s New Haven campus, with hundreds of students joining a sit-in after at least 30 professors cancelled classes.

Kavanaugh has vigorously denied the allegations made by Ramirez and by Christine Blasey Ford, who accused Kavanaugh of a sexual assault at a party when they were both teenagers.

In a letter to the Senate Judiciary Committee on Monday, Kavanaugh said those allegation are “smears, pure and simple,” and “a last-minute character assassination.”

“Such grotesque and obvious character assassination — if allowed to succeed — will dissuade competent and good people of all political persuasions from service,” he wrote.

During and interview with Fox News Monday evening, Kavanaugh again said he never sexually assaulted anyone.

“The truth is I’ve never sexually assaulted anyone, in high school or otherwise,” he said.

Kavanaugh also said he never had sexual intercourse “or anything close to (it)” until long after he left Georgetown Prep, an all-boys Catholic high school in suburban Maryland that he attended.

Meanwhile, Ramirez’s story, detailed by The New Yorker in a story posted Sunday night, bolstered Democrats, like Sen. Richard Blumenthal, D-Conn., who are trying to derail the nomination.

On Monday, Blumenthal joined other Democrats in calling for a postponement of a Senate Judiciary Committee hearing scheduled Thursday to hear testimony from both Kavanaugh and Ford.

Blumenthal, a member of the Judiciary Committee, and other Democrats also renewed their calls that the FBI conduct an investigation into the allegations before the committee holds its hearing. He also indicated the accusations leveled at Kavanaugh are hitting their mark.

“This nomination seems to be unraveling in real time,” Blumenthal said at a press conference Monday with 120 Yale student and faculty members in a cavernous room in the Russell Senate Office.  This is the same room where senators held hearings on the allegations made by Anita Hill against then-Supreme Court candidate Clarence Thomas.

Blumenthal said Mark Judge, a high school friend of Kavanaugh’s who was named by Ford as an accomplice in her sexual assault, as well as others at the party should be called as witnesses. Blumenthal also said Ramirez should be added to the witness list, along with witnesses on trauma.

But Republicans on the Judiciary Committee, who hold the majority and largely control the panel, insist that only Ford and Kavanaugh should testify.

“It is not complicated to want to get all the facts before making a decision,” said Yale Law School professor Michael Wishnie, a classmate of Kavanaugh’s who traveled with the students to Washington D.C.

Wishnie is one of nearly 50 Yale Law School faculty members who wrote to the Judiciary Committee last week asking for an investigation by the FBI, or other “neutral” investigative agency, into the allegations of sexual wrongdoing by Kavanaugh.

Meanwhile, senior Republicans, led by Senate Majority Leader Mitch McConnell, are closing ranks around the nominee, and echoing Kavanaugh’s claims that Democrats are running a “smear campaign” to derail his confirmation.

President Donald Trump told reporters on Monday that he will back Kavanaugh “all the way,” dismissing the allegations against him as “political.”

To Hannah Duncan, a first year Yale Law School student, however, the allegations against an alumni who would join other Yale Law School grads on the Supreme Court are credible and should be investigated.

“I feel strongly that these allegations against him have to be properly evaluated,” she said.

Several students, including Duncan, said they made the trip to Washington D.C. to show the world that not all students and faculty at Yale Law School are in agreement with what they call an “endorsement of Kavanaugh” by their college.

When Kavanaugh was chosen by Trump to replace retiring Justice Anthony Kennedy, the law school put out a release praising the nominee.

“I have known Brett Kavanaugh for many years,” said Dean Heather K. Gerken in the release. “I can personally attest that, in addition to his government and judicial service, Judge Kavanaugh has been a longtime friend to many of us in the Yale Law School community. Ever since I joined the faculty, I have admired him for serving as a teacher and mentor to our students and for hiring a diverse set of clerks, in all respects, during his time on the court.”

But the release also had a disclaimer that said “Yale Law School is a nonpartisan institution. While individual faculty members may make comments regarding a particular candidate, the Law School neither endorses nor opposes candidates for office.”

A spokeswoman for the law school said similar releases were issued when Justices Sonia Sotomayor and Sam Alito were nominated to the high court.