Subpoenas and threats in D.C., a harder push for tolls at the State Capitol

At the Connecticut Capitol, debate intensified over highway tolls; a radical new tax scheme and; in a marathon session, approval of the $15 minimum wage.

Even louder than the week before, the political saber rattling in Washington was mainly spin-off from Special Counsel Robert Mueller’s report – portions of which the president claimed executive privilege over. 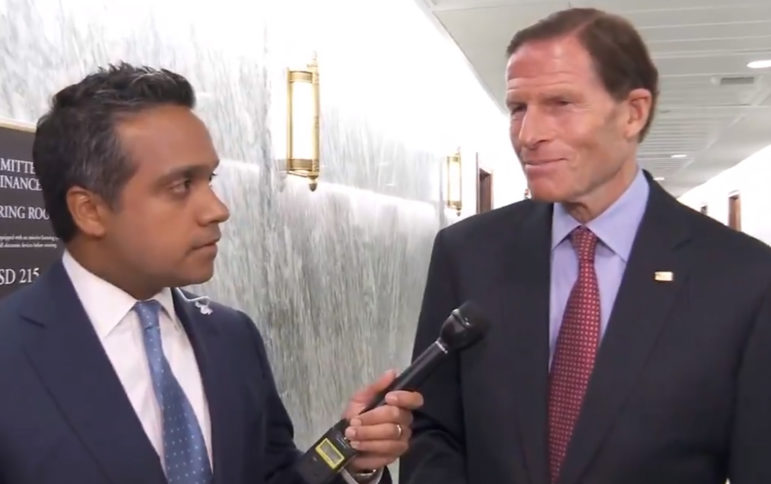 U.S. Sen. Richard Blumenthal talking to a reporter  about Donald Trump Jr. at the Capitol.

Connecticut Sen. Richard Blumenthal – one of Trump’s most constant critics – said Donald Trump Jr. should be “locked up” if he fails to comply with a subpoena from the Senate Intelligence Committee – ostensibly to explain potential discrepancies between his earlier testimony before Congress and Mueller’s report.

U.S. Rep. Jim Himes, D-4th District, is eagerly awaiting Mueller’s testimony before Congress, but doesn’t expect the former FBI director to say much more than his report already has.

Back in Connecticut, as the end of the legislative session approaches, Gov. Ned Lamont was working to ramp up the pressure on lawmakers to approve his plan for highway tolls.  As part of his approach, the governor promised to devote more state resources to transportation construction between now and 2024 when toll revenues would come on line.

Tolls seem to be a defining issue between Democrats and Republicans in the state House, but so is the $15 minimum wage approved after a marathon overnight debate. Even the Democrats, who control the body, had to iron out some differences in order to succeed.

Passage of the higher minimum is not likely to make nursing homes happy unless the legislature also comes up with more Medicaid reimbursement funds.  So far that has not happened, prompting the nursing home employee union to renew its threat to strike. 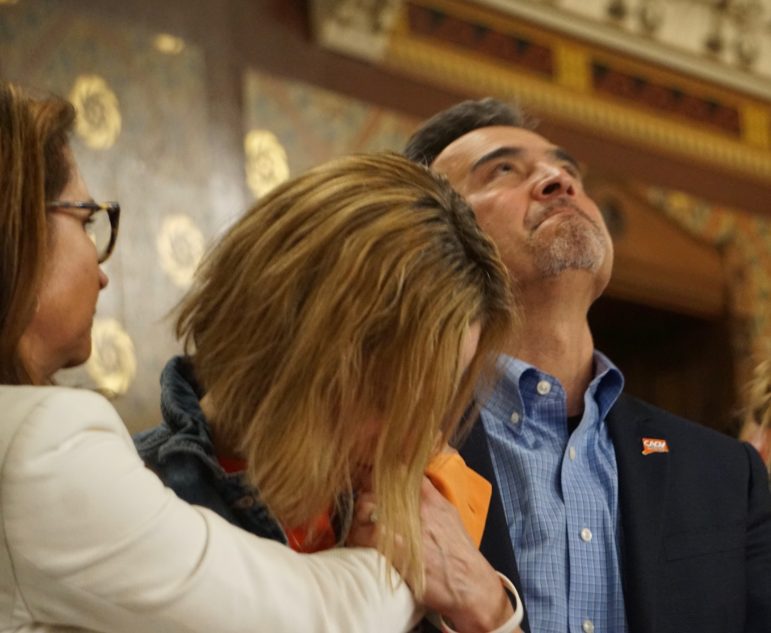 Kristin Song is briefly overcome during the roll call vote. Her husband Michael looks up, saying he felt his son Ethan’s presence and absence during the debate over “Ethan’s Law.”

There was significant progress on several bills, including final approval on a pilot program allowing the cultivation and sale of hemp.  The House also passed several gun-safety measures, the most emotional of which was a 127-16 approval of  “Ethan’s Law” requiring storage of untended firearms, loaded or unloaded.

The Senate also passed a bill that would make it a felony to send intimate images of a person through the internet without consent.

A plan to eliminate the religious exemption for vaccinating school children is still pending, but State Attorney General William Tong says such a move would not violate the state constitution.

Other legislative endeavors appear to be losing steam, however. Early voting, for example, won Senate approval, but not by enough to put the constitutional amendment proposal on the November ballot. Neither is legalized sports betting likely to make it through the legislative sausage grinder this year. A proposal to give Connecticut students a free college education is currently not before the General Assembly, but proponents say a large surge in enrollment could make it financially doable.