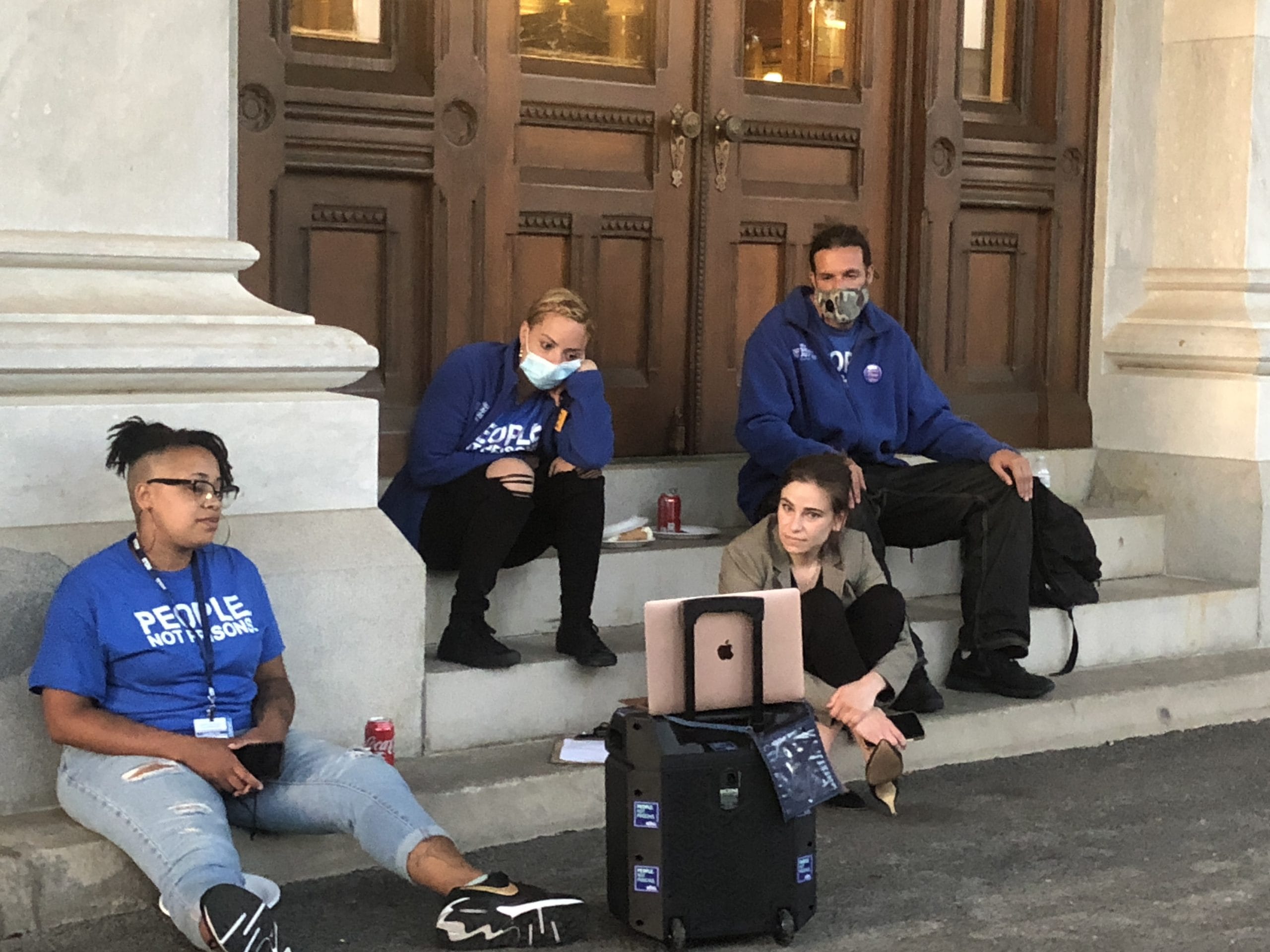 The ACLU of Connecticut Smart Justice team listens to the House Clean Slate debate from outside the Capitol.

The House of Representatives voted 91-56 for final passage Thursday night of a “clean slate” bill, sending to a publicly noncommittal governor a measure that would automatically erase certain criminal convictions from a person’s record if they go seven or 10 years without committing another crime.

“If it wasn’t a life sentence going in, it shouldn’t be a life sentence coming home,” said Rep. Robyn Porter, D-New Haven, who told a story about the time her son spent locked up. “This bill is going to open doors for people.”

Gov. Ned Lamont, who proposed a more modest version last year covering selected misdemeanors, has expressed concern about the reach of a bill that was revised at the insistence of House Democrats to make crimes involving children and other vulnerable victims ineligible for expungement.

The Senate passed a clean slate bill last week that would have included more crimes eligible for erasure. But objections in the House stalled passage and forced changes.

The result: a separate Senate bill passed late Wednesday that was backed by Republicans that gives police officers the right to review body camera footage before release and creates a process for objecting to a subpoena by a civilian police review board. It was amended to narrow the list of crimes in the clean slate measure.

At a news conference Thursday, Lamont said he was “sympathetic” to the cause but declined to commit to signing until further review.

The crimes carved out of the bill passed by the House on Thursday were not committed because of a person’s addiction, or because they were “down on their luck,” said Rep. Liz Linehan, D-Cheshire and co-chair of the Children’s Committee. “These are crimes that have to do with compulsion and hurting others.”

Stafstrom acknowledged the bill the House voted on Thursday was “a watered-down version of the bill that came out of committee,” which made more felonies eligible for automatic erasure. “But  criminal justice reform is hard. And this is certainly a step in the right direction today.”

Lamont said Wednesday he would tend to “start with a narrower set of non-violent crimes, show that the system works, and then expand from there,” echoing the approach he took in last year’s session, when his administration explained that his low-level misdemeanor-only proposal was a part of a “multi-year effort.”

The bill passed by both chambers this year, if signed by the governor, wouldn’t become effective until Jan. 1, 2023. Stafstrom said that gap year likely means lawmakers won’t consider expanding the list of crimes eligible for automatic erasure in next year’s legislative session.

“We’re going to need all of next year in order to do the behind-the-scenes data processing and coding and the like to actually effectuate the erasure,” Stafstrom said. “But once that first round of erasure goes into effect and folks hopefully see the benefits to it, then potentially you could expand the list of crimes that would be included.”

Research supports the idea that lawmakers could expand the crimes eligible for automatic erasure without negatively impacting public safety. A study in Michigan, which has a clean slate law, found that there were “minimal” differences between recidivism rates after five and 10 years had passed following a person’s conviction. Notably, researchers also found that less than 1% of people who had a violent felony expunged from their records were convicted of another violent crime five years after their expungement.

Connecticut’s clean slate would affect more than 300,000 residents who have served their time, Stafstrom said, helping them acquire housing, get better jobs and earn an education. He framed the measure as an economic recovery bill that will put people back to work who are locked out of the economy because of their criminal records.

A recent study from the Paper Prisons Initiative of Santa Clara University found that of the roughly 407,000 Connecticut residents with criminal records, 89% were eligible to apply for a pardon. Any Clean Slate relief would immensely benefit Black residents, as Black men are four times more likely than whites to be incarcerated; Black women and men are three times more likely than their white counterparts to have a felony conviction.

The Judiciary Committee’s ranking GOP member, Rep. Craig Fishbein, R-Wallingford, told his colleagues about two of his family members who were convicted of crimes — one who served 10 years in prison and got out last year, and one who is serving 20 years behind bars.

“I know that when he gets out, it will be difficult for him. Spending 20 years in jail is going to have a negative impact on him,” Fishbein said. “I know that people can change, and those people are entitled to second chances. The law before us, though, goes way too far.” 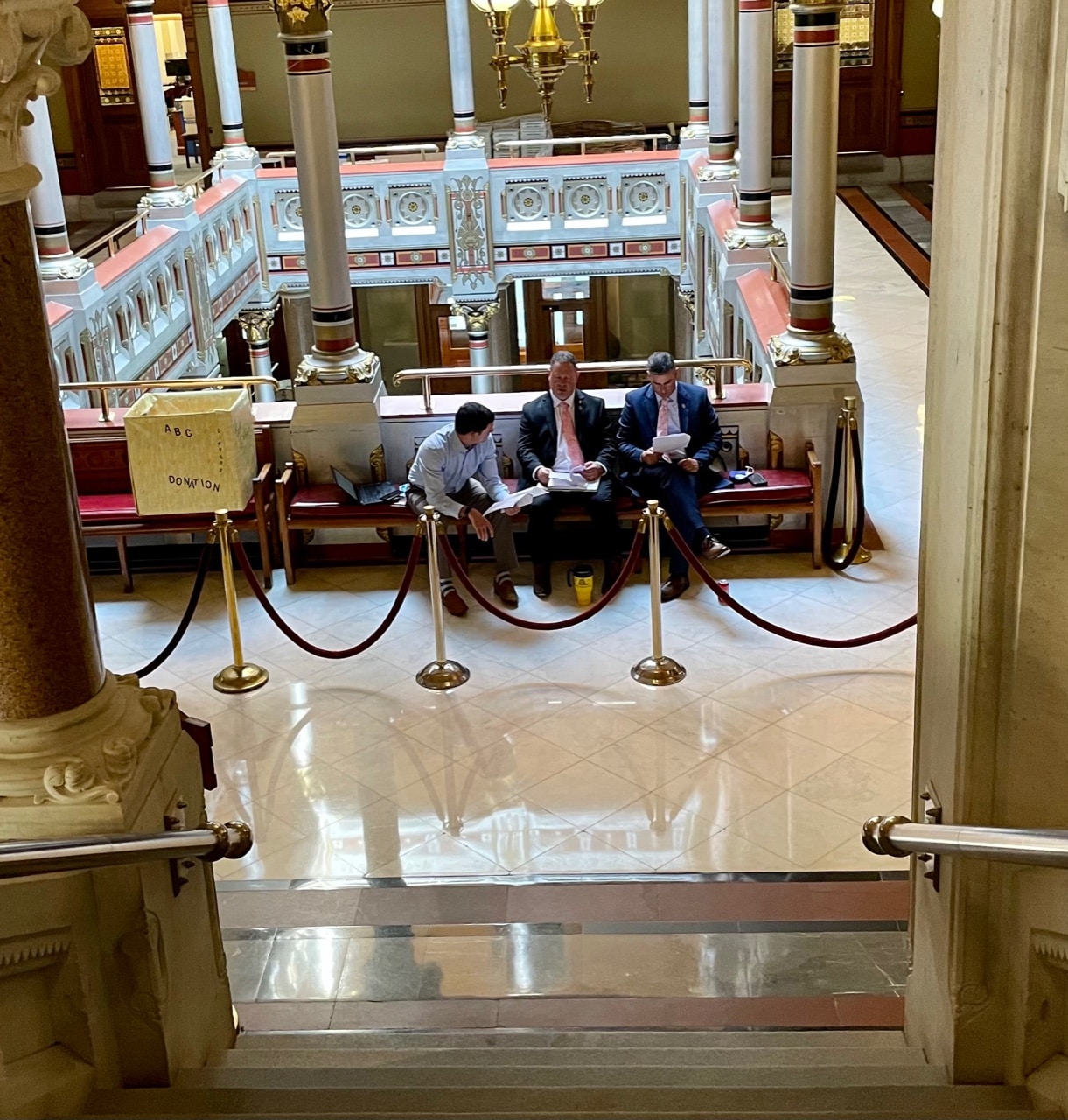 “I understand the point that we’re trying to achieve here,” said Rep. Greg Howard, R-Stonington. “The real debate isn’t which statutes should we erase. The real question is, which folks who committed these crimes really are deserving of a second chance?”

Others objected to the automatic nature of the proposed policy, requiring no action on the part of the person with a record, other than not committing another crime for a set number of years.

“An erasure should be provided to someone who is remorseful, acknowledges the wrong that they committed and, one would hope, Mr. Speaker, turn around and do good,” said Rep. Rosa Rebimbas, R-Naugatuck. “This automatic erasure does none of that.”

“I have not once said today, ‘It is OK to commit a crime,'” Stafstrom said. “That’s not what this bill’s about.”

What it is about, Stafstrom said, is that, “after someone has shown that they have paid their debt to society, that they can go a period of time without having reoffended, that they should be allowed an opportunity to move on with their life and not face discrimination in terms of employment, housing or higher education.”

All their amendments failed. The House passed the bill 91-56 after about six hours of debate.

Around a dozen members of the ACLU of Connecticut’s Smart Justice team sat outside the Capitol listening to legislators in the House chamber on a loudspeaker connected to a laptop. As organizers directly affected by the criminal justice system, for many, the stakes of Thursday’s debate were personal.

Marquita Reale said she spent a few months in prison for a drug possession charge more than a decade ago. When she got out, she earned two certificates for trades as a legal officer and a pharmacy technician. But when she went looking for work, she found that the doors weren’t open to people like her — those with a criminal record. 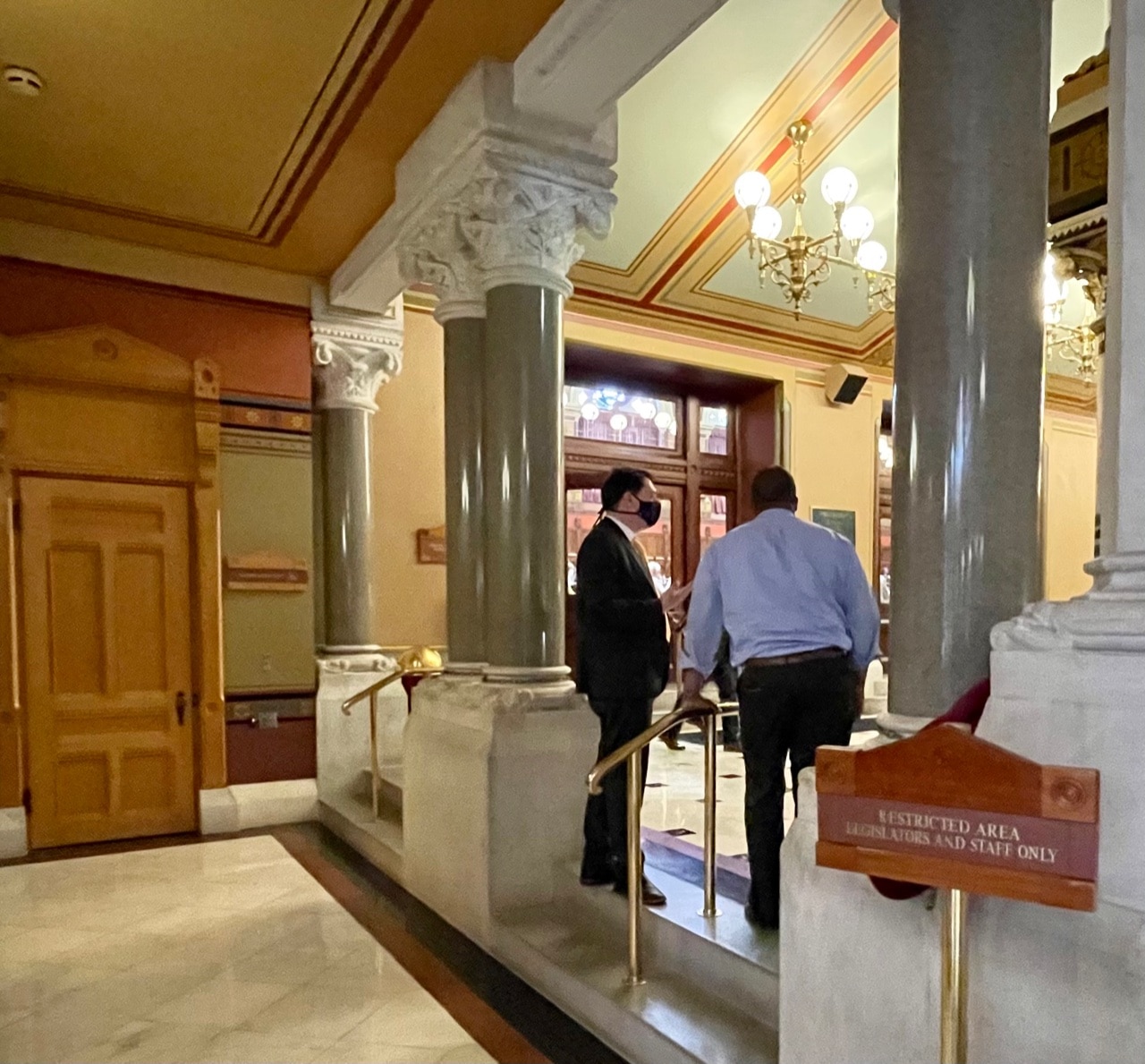 Sen. Gary Winfield, the chief Senate sponsor, talks to Matthew Brokman, the chief of staff to the House majority leader, in the foyer outside the House as the debate was about to start.

With Clean Slate passed, Reale said, it’s as if lawmakers are taking a scarlet letter off her.

“I’ll be able to find work and provide for my family,” Reale said. “It takes a prejudice off of you.”