The week began with a lot of suspense over…

… and how the NFL would react to President Donald Trump’s assertion that teams should fire any player who refuses to stand during the national anthem.

The Graham-Cassidy healthcare proposal failed — even after some last-minute adjustments. The hurricane created a massive humanitarian crisis and will potentially require months or years of recovery. No one in the NFL was fired, and for the most part, it collectively took a knee. 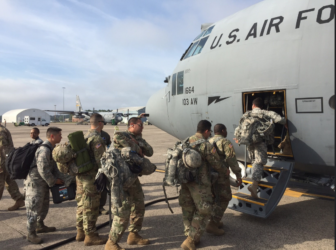 Of paramount and growing concern, of course, was the humanitarian crisis in Puerto Rico — something felt acutely in Connecticut because of its many familial and cultural ties to the island. Tuesday the state National Guard deployed soldiers and C-130 cargo planes to help deliver vital supplies; and by Friday the governor and his staff were planning how to accommodate the needs of Puerto Ricans arriving in Connecticut for temporary or permanent relief from the effects of the storm.

At the state Capitol, the months-long budget crisis continued unabated, with differences in opinion among Democrats and Republicans over nearly every aspect of the proposal approved the week before by state Republicans and a handful of Democrats. Gov. Dannel Malloy asserts that the Republican-crafted plan will not boost municipal aid as the GOP claims.

He had vowed a week ago to veto the bill, and Thursday did so.

Back in their home district, two state senators and two state representatives found themselves explaining to their fellow Democrats why they voted in favor of the Republican bill in the first place.

As far as eventually adopting a budget is concerned, time is not Connecticut’s friend. A chance to change the way the state taxes hospitals – and simultaneously increase the size of its federal Medicaid reimbursement – will soon expire. The governor said he might be able to stretch the deadline, but not by much. Complicating the issue is a lawsuit brought by the hospitals. Malloy says he wants it settled before the state moves forward on the revised tax plan, but it is not settled yet.

As with all complex legislation, the budget proposal is causing many points of disagreement and concern — among them funding cuts for the University of Connecticut and the Citizens’ Election Program.

University President Susan Herbst said the unprecedented cuts proposed under the Republican plan would cause a massive reduction in services and closing of some satellite campuses, prompting Sen. Majority Leader Len Fasano to say that if that’s the best she could do with UConn’s nearly $1 billion state allocation, she should resign. (For a quantitative look at the university’s metrics, check out this collection of graphs and charts.) 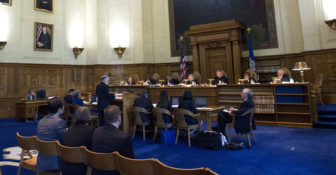 Opening statements by the defendants in the school funding case being heard by the state Supreme Court.

School funding and its impact on poverty also remains a huge issue — one the State Supreme Court began to address this week in a suit brought by the Coalition for Justice in Education Funding. Opening arguments came at a time when Connecticut’s school population is projected to fall at one of the fastest rates in the nation. (The case also opens at a time when the governor is reviewing two additional nominees to the high court.)

The adequacy or inadequacy of the state budget’s funding for financially strapped Hartford is also an issue, especially considering a warning by market analysts that allowing the city to go bankrupt could cause a “contagion effect” that would hurt the state and other municipalities as well.

One bit of good news: While already low, Connecticut’s murder rate is down dramatically despite a slight uptick in violent crime. (You can explore this year’s municipal crime data and decades more in this interactive compilation.)

On the political front, state Veteran’s Affairs Commissioner Sean Connolly announced he  is stepping down, causing some speculation among his fellow Democrats that he may be planning to run for governor. The state Democratic party, meanwhile, made its final payment to the State Elections Enforcement Commission as settlement of a complaint that it illegally put contributions from state contractors into a federal account to support the re-election of Malloy in 2014.

In Washington, as interest in the NFL’s conduct during the national anthem began to subside, Congress’s tradition of accomplishing little continued apace as it missed a deadline to renew a program providing 17,000 Connecticut children with health care coverage.

On Wednesday President Donald Trump unveiled the outline of his plan to cut taxes for corporations and to eliminate the estate tax on inheritances over $5.34 million — one a relatively high percentage of Connecticut residents pay.

Trump’s political adviser and Norwalk native Roger Stone, meanwhile, told the House Intelligence Committee Tuesday that he had no contact with Russian operatives during the 2016 presidential election.