President Donald Trump insists he is not a racist, but 51 percent of Americans believe he is, according to a Quinnipiac University poll released last week.

Certainly his “send her back” comments about Somalia-born U.S. Rep. Ilhan Omar of Minnesota and last week’s jabs at U.S. Rep. Elijah Cummings of Baltimore did nothing to dispel that image.

U.S. Rep. Jahana Hayes, D-5th District, the first African-American woman to represent Connecticut in Congress, has recently been the recipient of vile and racist phone calls and emails – so much so that she is being extra careful about disclosing her plans for public appearances.

Former Vice President Joe Biden, who mixed it up verbally with his opponents on the second night of last week’s presidential debates, continues to be the Democrats’ most popular candidate, the Q-poll reported. But author Marianne Williamson, one of 20 Democrats participating in the debates, became the most quotable when she put the blame for the upswing in racism and bigotry squarely on Trump, calling it the “dark psychic force of the collectivized hatred that this president is bringing up in this country.”

One item that the Republicans are not bringing up, however, is U.S. Rep. John Larson’s bill to improve the solvency of the Social Security fund. Neither is U.S. Senate Majority Leader Mitch McConnell — now nicknamed “Moscow Mitch” —  taking up any  election security bills — including one from U.S. Sen. Richard Blumenthal that would require candidates or their campaigns to report offers of help from foreign governments.

“The people aren’t in charge of the United States Senate anymore,” observed Sen. Chris Murphy in lamenting the body’;s failure to take action following the latest shooting death — of a six-year-old boy.

The big news last week in Connecticut, of course, was the implementation of the ban on plastic check-out bags that began to phase in on Thursday. 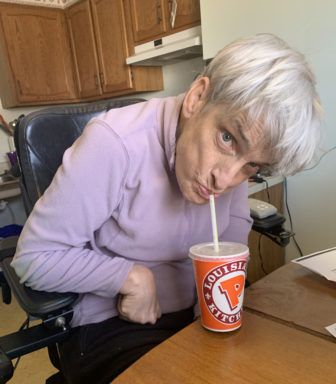 Mary Ann Langton of West Hartford demonstrates how a plastic straw enables her to drink independently.

It is doubtful many fans of getting plastic out of the waste stream have heard the complaints of people like Mary Ann Langton, who has cerebral palsy and opposes the proposed banning of plastic straws.

But speaking of straws, Gov. Ned Lamont apparently experienced his last one just before ordering an administrative review of personnel, staffing and morale problems at two troubled quasi-public agencies — the Connecticut Lottery and Connecticut Port Authority. The governor also launched a major effort to restructure the government’s human resources administration — a centralization plan that officials said could save Connecticut $10 million every year.

There is one real bright spot in the state’s financial picture, at least: the state’s budget reserve has nearly reached a 20-year high.