Some steamed as legislative session is reaching full steam 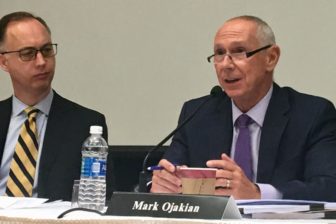 This year’s legislative session has almost reached its full momentum now, propelled by one powerful and unavoidable phenomenon: a rising tide of crushing state debt.

Over the last week, recognition of the state’s financial trajectory has led to at least one predictable result: increasingly frayed nerves in all quarters as the stakes on legislative issues come into sharper focus.

All driven by monetary concerns, some big changes have been put in play, perhaps the most significant of which is a move to consolidate the state’s 12 community colleges and four regional state universities. The Board of Regents for Higher Education on Thursday raised tuition in an effort to halve a projected $35 million deficit in the next fiscal year and agreed to President Mark Ojakian’s consolidation strategy.

Though not directly cost-related, the State Board of Education abandoned the long-debated and contentious notion that students’ mastery test scores should be used to evaluate teachers.

Also caught in the state’s growing need to reduce costs and/or raise revenue, however, Connecticut’s hospitals pushed back hard on Wednesday in an effort to stop hundreds of millions of dollars in tax increases recommended by Gov. Dannel Malloy.

The depth, breadth and likely longevity of the financial mess was underscored, once again, by Moody’s Financial Service which Wednesday warned investors that Connecticut’s weak economy and growing retirement benefit costs are likely to persist into the next decade. 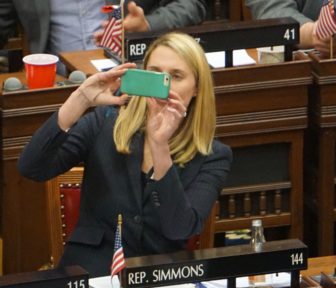 Rep. Caroline Simmons takes a picture of the vote tally after passage of the first bill she debated as co-chair of the Commerce Committee.

Money also figures heavily into the picture as legislators weighs the pros and cons of granting the Mohegan Sun and Foxwoods Resorts Casino permission to build an East Windsor casino — the first off tribal property. Friday, State Attorney General George Jepsen said he saw little new in the tribes’ promise to continue paying the state a share of their slot machine revenue even if their compact with the state is invalidated by the Bureau of Indian Affairs.

There are nine weeks left before this session adjourns, and the first bills —  non-controversial ones — are being passed. One bill that did not make it, however, was the governor’s plan to extend the jurisdiction of the juvenile courts to defendants who are 21, sparing them from criminal records that could dog them for a lifetime.

On the federal level, the resistance by Democrats to President Donald Trump’s administrative efforts continued, but tempered by their reaction to Trump’s surprise missile attack on a Syrian air base.

On Wednesday, U.S. Sen. Chris Murphy introduced Westport Dr. Scott Gottlieb as Trump’s nominee to head the federal Food and Drug Administration, but made it clear he is not necessarily supporting someone who has vociferously opposed the Affordable Care Act and energetically backed Republican candidates. 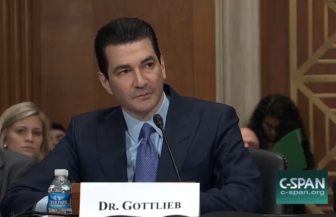 Scott Gottlieb delivers his opening statement at the confirmation hearing on his bid to head the FDA.

Murphy and fellow Sen. Richard Blumenthal, of course, were among the Democrats whose filibuster led Republicans to change Senate rules allowing for Friday’s confirmation of Supreme Court nominee Judge Neil Gorsuch by only a simple majority rather than a 60-vote margin. The Connecticut senators will have to cope with the outcome and change of rules.

They hardly had time to contemplate the potential consequences of the appointment before having to weigh in on the missile attack — a response to Syria’s use of chemical weapons to kill its own civilians. While not objecting to the air strike per se, they and others maintain that the president will have to seek a congressional authorization for the use of military force if he plans to take further action.

Connecticut was also among 17 states who filed a legal challenge to Trump’s move to reduce the Environmental Protection Agency’s effort to slow climate change.