Elections and holiday over, now it’s time to get re-organized.

With the elections over, (with one notable exception) Connecticut began getting re-organized last week.

And it took some time off for the Thanksgiving holiday, too.

Early in the week, Gov.-elect Ned Lamont returned from an orientation for new governors promising to assemble a top-notch group of departmental appointees. He and Lt. Gov.-elect Susan Bysiewicz have scheduled a policy summit for Tuesday where the plan is to “bring together some of Connecticut’s sharpest minds to help Susan and me make our vision for the state a reality,” Lamont said.

One element of his plan will involve making what he calls “structural changes” needed to bring the state’s deficit spending habit under control. That will not include heavily tapping the state’s so-called Rainy Day Fund, he said, because “it is not a rainy day.”

The state may, however, be able to cut some of its borrowing costs through refinancing now that Attorney General George Jepsen has issued an opinion that potentially gives the administration a way around an inherently absurd (his word) conflict between a new state borrowing cap and some bond covenants established last May.

Another part of the reorganization plan is to improve participation in state government and politics by the Latino community through the efforts of a group that will work with Lamont to name more Latinos to his administration. The last election saw a big increase in Latino participation, not just in Connecticut, but all over the country. 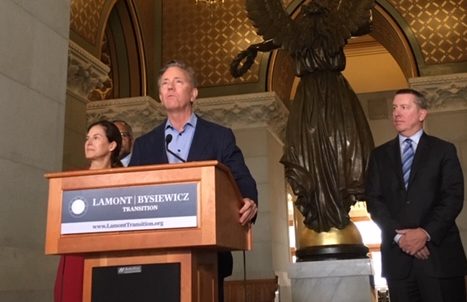 Thursday, in his last Thanksgiving message before leaving office, Gov. Dannel Malloy observed that Connecticut, despite its troubles, is “a small state with a big heart.”

Certainly there are plenty of heart-breaking issues for state government, reorganized or not, to attempt to address.

Homelessness in Connecticut is less of a problem than it used to be, but there are still people who need shelter in every community.

And then there is the mental health of Connecticut’s teenagers who, according to the experts, are suffering more than ever from depression and anxiety; and, in some cases, are committing suicide.

The number of juveniles being detained for minor offenses, at least, has declined significantly. State officials and members of the Connecticut Congressional delegation are not in sync, however, over the best way for the Department of Social Services to expand psychiatric and substance-abuse treatment programs through HUSKY, the state’s Medicaid service.

It is not clear whether a court or the state legislature will be resolving the last remaining undecided state election in Stratford. Attorneys for incumbent State Rep. Phillip Young and Republican challenger Jim Feehan are still working that out.

In Washington, meanwhile, Connecticut Sen. Richard Blumenthal is decidedly out of sync with President Donald Trump’s appointment of Matthew Whitaker as acting attorney general. Blumenthal is suing the president in an attempt to block it.