...while at the State Capitol, a $15 minimum wage is poised to become law 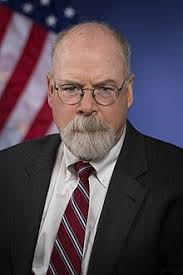 Does one good witch hunt deserves another?

Veteran prosecutor and U.S. Attorney for Connecticut John Durham has been assigned to, in President Donald Trump’s parlance, “investigate the investigators” who initiated the investigation into Russian involvement with the 2016 elections – an inquiry Trump has always called a “witch hunt.”

Durham’s work — decried by some as an attempt to  legitimize the president’s theory–   is not likely to get as much attention in Connecticut as Trump’s trade war with China, which will likely increase prices everywhere from Walmart to the manufacturing floor at Stanley Black and Decker.

Connecticut Sen. Chris Murphy, whose interest in foreign relations is helping shape Democratic party doctrine, is very unhappy about Trump’s “pathological lying” which he says has “turned American foreign policy into a joke.”

The entire congressional delegation, on the other hand, is pleased with the Navy’s decision to have Sikorsky build a dozen “King Stallion” helicopters for $1.3 billion. Even though the state gained 300 new jobs in April, its economy can still use the stimulus.

At the State Capitol there is fierce debate between Democrats and Republicans as to what will be the impact of state’s move to raise the minimum wage to $15 an hour by 2023 now that the State Senate has approved it and the measure will likely be signed by Gov. Ned Lamont.

The governor still has his share of persuading to do on another major initiative – tolls for Connecticut’s major highways. Passage of the idea is still uncertain as the end of the legislative session approaches.

Still pending, as well, is another huge financial issue: whether to refinance billions of dollars in pension debt, effectively moving about $9 billion of the responsibility – plus interest — onto the next generation. 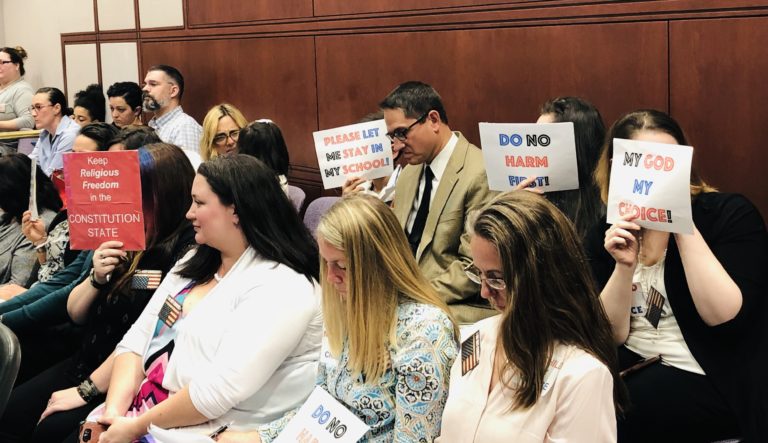 People gathered at the state’s Legislative Office Building to condemn a plan to remove the religious exemption on vaccines.

Speaking of the younger generation – those whose parents have chosen not to have them vaccinated will still be able to attend public school claiming a religious exemption now that the legislature has decided not to pursue the issue for at least another year. The notion of eliminating the religious exemption last week generated a lot of heated resistance from parents who are using it because they believe the concept of “herd immunity” is a “false theory.”

Another initiative generating resistance is the Connecticut State Colleges and Universities plan to consolidate its 12 community colleges, where faculties of at least five have voted no confidence in President Mark Ojakian and the Board of Regents for Higher Education. 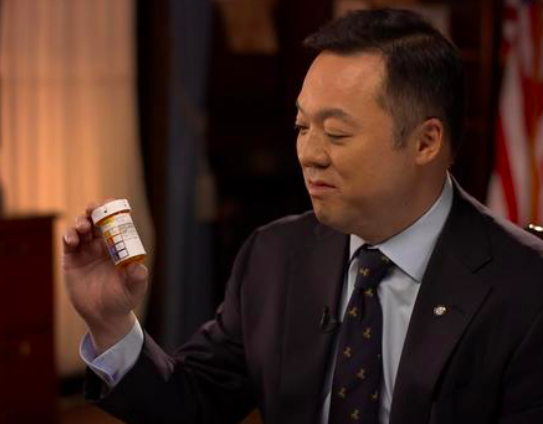 State Attorney General William Tong during his appearance on “60 Minutes” to talk about his office’s lawsuit.

Other issues are moving forward, however, including the perennial effort to require more motorcyclists – in this case, those 18 to 21 – to wear a helmet; raises for state troopers (gained in an arbitration award), a measure to further restrict how police can work with federal immigration officials to detain undocumented immigrants, and a bill to bar faith-based pregnancy centers from using deceptive practices to steer women away from abortion. The State Senate also approved a bill requiring nursing homes to publicly display daily reports on the number of staffers on duty to care for patients.

In reaction to an apparent arson at a New Haven mosque, lawmakers proposed borrowing $5 million to improve security at Connecticut houses of worship. They also are proposing a clearer definition of the State Attorney General’s ability to investigate hate crimes and civil rights violations.

For his part, State Attorney General William Tong’s office expanded the scope of Connecticut’s investigation of alleged price fixing by the pharmaceutical industry by filing a 500-page lawsuit accusing a long list of generic drug manufacturers of a massive billion-dollar conspiracy.