Connecticut is no Alabama — and says so

As if it were possible, relations between President Donald Trump and Democrats worsened last week when Trump angrily announced he would no longer work with them on infrastructure improvements or other projects until they drop their multiple investigations of his conduct.

Some said it was just Trump’s excuse to avoid having to find $2 trillion for the infrastructure project (that Connecticut is not ready for anyway). Others said House Speaker Nancy Pelosi had deliberately triggered Trump’s wrath when she repeated the often-heard comment that the president had been attempting a “cover-up” through his refusal to comply with Congressional subpoenas and other demands.

Elsewhere in Washington, Connecticut lawmakers like Sen. Richard Blumenthal were reacting to recent passage of Alabama’s stringent anti-abortion legislation some see as a warm-up to a challenge to Roe v. Wade. Blumenthal was among those introducing the Women’s Health Protection Act to guarantee access to legal and safe abortions.

Blumenthal was also on hand when U.S. Rep. Rosa DeLauro, D-3rd District, joined others in the Connecticut delegation to introduce a federal version of “Ethan’s Law,” a measure to ensure safe storage of firearms. It is similar to a measure passed in the Connecticut state Senate on Thursday as the parents of Ethan Song, — a 15-year-old accidentally killed with a neighbor’s pistol – watched in gratitude.

Gov. Ned Lamont addressed the Alabama abortion law issue by joining with Lt. Gov. Susan Bysiewicz in an invitation for women-owned businesses in that state (and others with harsh anti-abortion statutes) to relocate here.

He and state Senate Democrats do not see eye-to-eye, however, on a bill creating a paid family and medical leave insurance policy for the state – a measure approved Wednesday night despite Lamont’s threat of a veto. The governor has also conceded that his plan to impose highway tolls will not be voted on by the June 5 end of the legislative session, so he expects to take up the matter in a special session after. 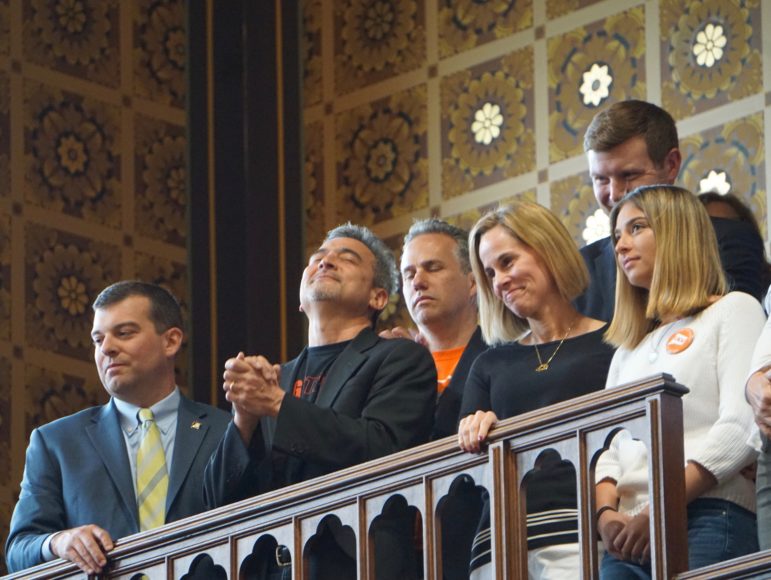 Michael and Kristin Song, center, react to final passage of Ethan’s Law. At right is their daughter, Emily.

The governor is on board with major initiative to create a “public option” health insurance plan partly paid for by effectively reversing – in Connecticut – the elimination of the Affordable Care Act’s mandate that all adults have health insurance or pay a penalty.

Lamont has also apparently come to an understanding with lawmakers on a state budget, agreeing on a so-called “mansion tax” but not the income tax increase on the super rich sought by progressive Democrats. He has also agreed to higher reimbursement rates for state nursing homes, a move that seems to have caused nursing home workers to abandon their threat to strike.

For their part, legislators approved raises for state troopers and are moving a bill that would establish a health and human services network to assess the needs of the LGBTQ community. By a margin of 122 to 24, the House approved a bill that will make black and Latino studies part of every high school’s curriculum.

The was no such consensus on whether to require schools to teach climate change – a notion that brought out a number of climate change doubters from the ranks of the Republicans.