Legislative session over, but some pain lingers

The Connecticut General Assembly last week wrapped up Gov. Ned Lamont’s first legislative session with a new budget, an array of happy winners and disappointed losers and one big piece of unfinished business to address – tolls.

In national politics President Donald Trump and the extended first family visited the British royal family and got a lesson in formality before remembering D-Day.  Trump threatened to impose tariffs on Mexican products – striking fear into some U.S. manufacturers and consumers – before announcing a hold on the tariffs because of a deal apparently struck months ago with Mexico to control the flow of asylum seekers over the Texas border.

In Connecticut, perhaps the most significant legislative loser was the so-called “public option” healthcare plan that would have in effect reversed in Connecticut the undoing of the Obama-era mandate to have insurance and would have authorized a state-sanctioned health insurance plan for small businesses and others. Even a watered-down version of the plan suffered. Lamont said he wants to tackle it again next year.

One big move by lawmakers this year was to get into offshore wind power generation bigtime. There is still a question as to how much borrowing the state should do for capital projects, but it did manage to dole out a lot of little pork-like grants including a tax break for Cigna.  (Things have not been going as well in court for insurer Aetna and its potential merger partner, CVS.) 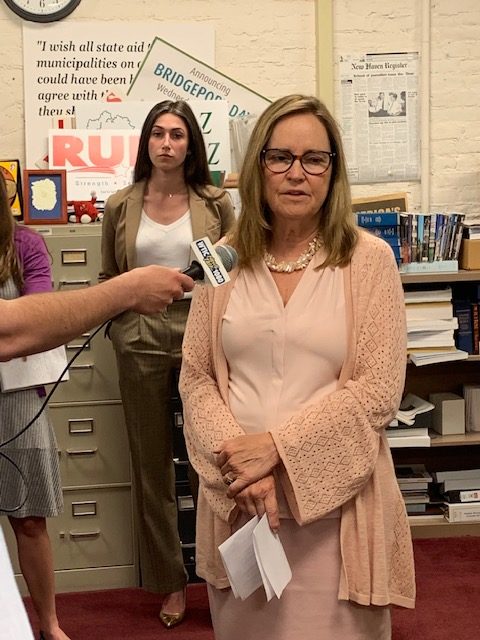 Secretary of the State Denise Merrill made an impromptu visit to the Capitol press room Wednesday afternoon to express her “deep disappointment” in the failure of a bill to extend voting rights.

Schools are the intended beneficiaries of a $100 million donation from the Dalio Foundation that is being combined with $100 million of taxpayer money, but its use and those deciding how to use it will be outside the bounds of public ethics rules and government transparency.  At least one state senator complained that exempting the fund from Freedom of Information and ethics requirements set a dangerous precedent, but House Speaker Joe Aresimowicz, D-Berlin, dismissed such concerns, saying “Let’s wait ’til there’s smoke before we say there’s fire.” Legislators are totally in favor of transparency for prosecutors, however.

Some legislators also like the idea of free public college, but putting such a plan into practice will depend on a complicated financing scheme and the Connecticut Lottery.

Secretary of the State Denise Merrill primarily blamed the Republicans for the failure of a bill that would have extended voting rights to several groups, including parolees, felons  and unregistered voters standing in line as the polls are closing.

Two bills did make it: one to sharply increase the number of teachers of color and another to prohibit law enforcement officers from firing into a moving vehicle except in special circumstances. On the environmental front, the legislature banned the use of single-use plastic bags two years from now but not plastic straws.