Questions about immigration reform and the fate of the so-called Dreamers lingered last week after Senate Republicans and Democrats reached a compromise agreement  to fund the government for another three weeks.

Connecticut’s all-Democratic congressional delegation mostly opposed the “continuing resolution” needed to reopen the federal government for business, though U.S. Reps. John Larson, D-1st District, and Joe Courtney, D-2nd District, did not. (The CR funded the Children’s Health Program  for six more years, but did not provide funding for the state’s community health centers.)

The delegation is not likely to approve of President Donald Trump’s latest iteration of immigration reform, either. 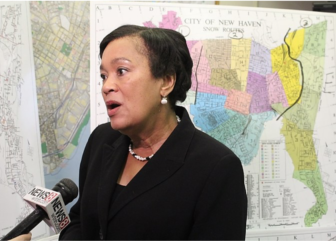 Connecticut, of course, is not a place where Trump’s policies get the warmest reception: Witness the state’s participation in a suit challenging the constitutionality of the new federal income tax law; or New Haven Mayor Toni Harp’s decision to boycott a meeting with Trump at the White House, or the list of people the congressional delegation has invited to the state-of-the-union address on Tuesday.

Sens. Chris Murphy and Richard Blumenthal are certainly not members of the president’s fan club, and both voted against his choice to be new head of the Department of Health and Human Services. Blumenthal is also concerned about recent reports that Trump nearly fired Robert Mueller, head of the Russia investigation, and wants legislation to prevent that.

Even Aundré Bumgardner, who started out as a 20-year-old black Republican legislator, has changed his tune and  three years later is an anti-Trump Democrat.

And these days, it would seem, all politics are presidential politics. Take Republican Susan Hatfield’s possible campaign for State Attorney General, for example. Although endorsed by her old boss Newt Gingrich, she was dubbed “a full-force racist enabler” by a prominent Democrat because she supported Trump in his last campaign.

Down in Fairfield County, Republican Harry Arora, owner of an investment firm, put up half a million dollars of his own money to mount a challenge against U.S. Rep. Jim Himes, who is known for his fund-raising prowess as well. 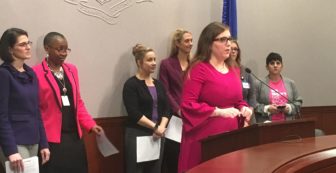 Five female state legislators, meanwhile, are teaming up to fight for bills to protect women’s health services. “We’re going to make sure that in Connecticut women will be able to maintain the health care benefits that they deserve, regardless of what the failed leadership in Washington, D.C., decides to do,” State Sen. Mae Flexer, D-Killingly, said.

The treatment of women in general continues to be a concern around the State Capitol, enough so that the General Assembly is reviewing its policies on sexual harassment. In specific, the judiciary’s chief court administrator told the legislature’s Children’s Committee that the conduct of a 41-year-old Hartford Detention Center officer toward a 17-year-old female inmate was “a gross violation of trust.”

The Connecticut Legals Rights Project is concerned about the state’s treatment of people committed to state mental hospitals. It has filed a class action lawsuit saying the Department of Mental Health and Addiction Services has been letting patients languish in the hospital long after they have been stabilized and made eligible for release.

The state’s finances and economy, of course, continue to be of ongoing concern — perhaps one reason Gov. Dannel P. Malloy this year is seeking only $281 million – a record low amount — to help cities and towns build or renovate public schools.

More to the point, the House chairman of the General Assembly’s tax-writing panel announced Tuesday he will propose adding 4 cents per gallon to Connecticut’s gasoline tax to avert a crisis in the transportation program.