A week of more fiscal and political heat

A lot of disagreement over a lot of issues in a week of heated politics over issues both financial and personal.

In Connecticut, as some observers expected, reaction to a tax-restructuring report by the Commission on Fiscal Sustainability and Economic Growth was mixed and, as a result, unlikely to produce major changes in state public policy any time soon — especially in an election year.

There were elements that both progressives and conservatives might like — a reduction of the state income tax and a recommendation for a higher minimum wage, the latter of which got Gov. Dannel Malloy’s approval. The panel (and others) also urged the legislature to hold off on immediately instituting the so-called “bond lock” process that would legally bind the state to a decade of stringent new fiscal controls. 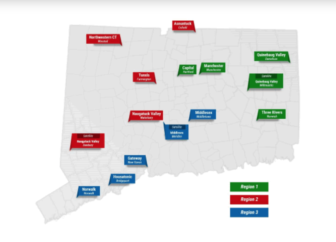 Where the state’s community colleges are located, and the new regions that will be overseen by a new administrative setup.

The fiscal sustainability commission also proposed a way to mitigate the looming financial nightmare caused by chronic under-funding of state teacher pensions: promise them the proceeds from the Connecticut Lottery.

Members of the Insurance and Real Estate Committee, meanwhile, are contemplating the establishment of a statewide individual health care insurance mandate to replace the one eliminated by Congress.

A proposal to consolidate the state’s 12 community colleges into one mega-college with 12 campuses — conditionally approved Friday by the Board of Regents for Higher Education — is being hotly disputed by faculty members who say the board has no comprehension of the chaos the measure will cause even as it attempts to save $28 million.

One proposal that seemed to engender little pushback was the governor’s bill that would change the way state prisons treat pregnant women and new mothers.

The tariff announcement distracted, at least partly, from the emotional and ongoing gun control politics in Washington, Florida and, of course, Connecticut, site of the Newtown massacre. While both Florida Sen. Marco Rubio and Connecticut Sen. Richard Blumenthal said they would introduce so-called “red flag” legislation to remove firearms from dangerous persons, Hartford Mayor and gubernatorial hopeful Luke Bronin went after the NRA, proposing to end the organization’s role in Connecticut’s process of permitting firearms owners.

The political season is maturing now, and some national issues are playing out locally. New Haven firefighters, for example, are getting support from a national right-to-work organization in their suit against the dues-collection practices of their statewide affiliate, the Uniformed Professional Fire Fighters Association of Connecticut.

The Democratic National Committee, meanwhile, has funneled $50,000 to state Democrats to help them in the 2018 elections. The balance of power in the state house is very delicate right now as the cast of characters changes. Witness the decision of former fund manager David Stemermann to enter the gubernatorial race; the abrupt resignation of State Rep. Angel Arce, D-Hartford, because of a texting incident involving a 16-year-old girl; and longtime Democratic State Senator Gayle Schlossberg’s decision not to seek re-election.

Only a week ago, Schlossberg recused herself from a controversial vote over the promotion of Justice Andrew McDonald to the State Supreme Court’s chief justice position. The debate over McDonald’s appointment has morphed into a full-bore political campaign after Republicans signaled an intention to block his appointment. 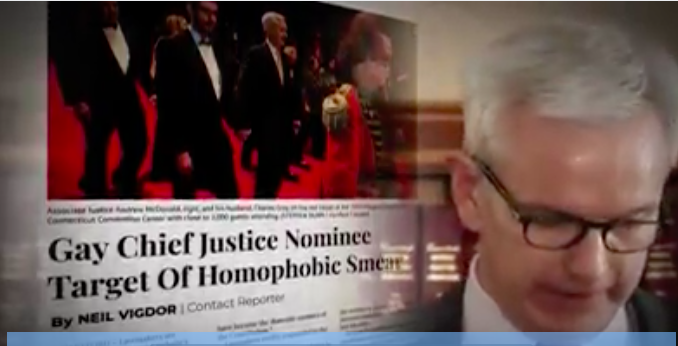 From the True Justice digital ad supporting the appointment of Justice Andrew McDonald..